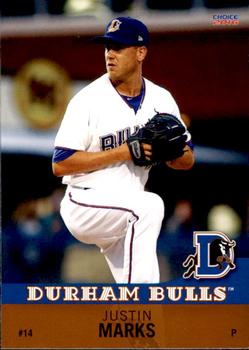 A crowd of 6,502 showed up at NBT Bank Stadium in Syracuse, New York, to see if their team, the Syracuse Chiefs, could sweep the Durham Bulls in an International League series in July 2016. Syracuse, the Washington Nationals’ Triple-A club, had won the first two games of the series, raising its record to 44-48. The team was mired in the cellar of the IL’s Northern Division, 14 games behind the Scranton/Wilkes-Barre RailRiders.

The Bulls had realigned from Class A to Triple A in 1998, the same season in which their parent Tampa Bay Rays debuted (as the Devil Rays) as an American League expansion franchise. They entered this game at 40-53. But despite their losing record, they were only 2½ games behind the Southern Division-leading Charlotte Knights.

Justin Marks started for Durham. The 28-year-old left-hander, a University of Louisville product, had been signed as a free agent by Tampa Bay in January after spending the previous six years bouncing around the minors between five organizations. Marks pitched for the Triple-A Reno Aces in the Arizona Diamondbacks system in 2015 and finished with a 5-9 record and a 5.63 ERA. Arizona released him after the season, and he signed with the Rays two months later.

Marks was struggling in 2016, entering the game with a 2-9 record. He had not won in five starts, since May 25 against the Toledo Mud Hens. His catcher was Hank Conger, who had been sent down to Durham just a few days earlier. It was Conger’s first game with the Bulls but Marks said that his catcher called a good game. “I don’t remember ever shaking him off during that game,” Marks recalled. “I don’t remember shaking him off at all so he was putting down the right fingers.”1

A.J. Cole was given the start for the Chiefs. The right-hander entered the game with a 6-5 record. He was looking for his seventh win after two disappointing starts; his last win was on June 26 against the Toledo Mud Hens.2

Cole held the Bulls scoreless through the first four innings. Durham had a runner in scoring position with one out in the second when Eury Perez singled and stole second. But Cole got Jaff Decker to fly out and struck out Daniel Robertson.

Meanwhile, Marks was also keeping the Chiefs off the scoreboard, aided by some adventurous outfield play. Caleb Ramsey, leading off for the Chiefs, “hit what appeared to be a routine flyball into calm skies toward center field, which Perez played very uncommonly. Perez zig-zagged as if he was being manipulated by a joystick, ultimately making the catch over his shoulders running toward the wall.”3 Perez was clearly thrown off when he tried to follow the ball; to test its direction, he yanked some grass and tossed it into the air after making the catch.

Marks got his first strikeout in the second inning when Pedro Severino struck out swinging. He relied on the Bulls’ defense for most of the evening; he didn’t get another strikeout until the sixth, when he fanned Brian Goodwin to end the frame.

Perez took away another potential Syracuse hit in the third. With one out, as reported on MiLB.com, “Steve Lombardozzi clubbed a deep drive to left-center, with Perez breaking toward the gap immediately after contact. A perfect route Perez took, laying out onto his chest and catching the shot at full extension.”4 It was the closest the Chiefs came to a hit all night.

The Chiefs had runners in scoring position in the fourth after Marks plunked Goodwin with one out. Goodwin stole second with two outs before Chris Bostick walked, the first of two walks Marks issued. Marks got out of the trouble by getting Matt den Dekker to ground out to shortstop.

The Bulls broke through in the fifth. Jake Goebbert led off with a ground-rule double and advanced to third on Conger’s groundout. Cole got Perez to line to right field for the second out but walked den Decker to put runners at the corners.

Robertson hit a groundball to Adrian Sanchez at second. Sanchez’s throw to first was wild. Goebbert and Perez scored, and Robertson ended up on third. Taylor Motter struck out to end the frame but the Bulls had a 2-0 lead.

Cole left after one batter in the sixth, replaced by right-hander Erik Davis. Davis pitched two perfect innings before being relieved by Bryan Harper in the ninth. The Bulls put a runner in scoring position after J.P. Arencibia singled and moved to second on a two-out walk to Goebbert. But Harper got Conger to ground into a force out and the Bulls failed to score.

Marks, however, would not need any more runs. The only question that remained was whether he would have enough pitches left in his arm to make Bulls history. Marks tallied 97 pitches through the seventh and reached 114 pitches after the eighth. His previous season-high pitch count had come two weeks earlier, also against the Chiefs. Marks threw 109 pitches in 5⅔ innings in the Bulls’ 6-4 loss.

Marks sprinted to the mound in the ninth. By this time, most of the fans at NBT Bank Stadium were on their feet waiting to see what would happen.

Leadoff batter Ramsey hit Marks’ fifth pitch of the at-bat up the middle. Marks tried to field it but the ball went just beneath his glove. But shortstop Robertson was in position and his throw got the first out. Marks was now at 119 pitches.

Five pitches later, Goodwin hit a bouncing grounder over the first-base bag. The ball was ruled fair by umpire John Bacon. Casey Gillaspie snagged it and made an easy out.

Goodwin was so convinced that the ball was foul that he didn’t run. He looked at the umpire in shock when he displayed the fair signal. Chiefs manager Billy Gardner Jr. immediately came out of the dugout to protest the call. While he argued with the umpires for the next two minutes, Marks stood on the mound “like a free throw shooter at the end of a [basketball] game.”5

By now Marks was feeling very fatigued. “I got to the last hitter and I knew that it was going to be my last hitter because I knew at some point,” he said. “I don’t know how many pitches I had thrown, maybe 130, maybe 136, but I knew I’d thrown a lot and I knew they weren’t going to let me go past this guy.”6

Marks now had to face Matt Skole, who had reached base seven times in the first two games of the series. He worked the count to 2-and-2. The fifth pitch was just off the outside corner. Second baseman Motter and the other players moved toward the mound, thinking it was a strike and the game was over. But the home-plate umpire called it a ball and they had to hold off their celebration.

“I remember having full count and Hank Conger putting down slider. It was probably the loopiest slider I’ve ever thrown because I just kind of changed my arm action on it,” Marks remembered. “I was really just trying to make a sweeping slider, just to see if he would just swing. I knew he was going to be aggressive. And so I just kind of drug it through the zone, threw it at his belt. I remember the pitch being a ball but he swung on it and the rest is history.”7 The pitch “broke outside and wide of Skole’s swing to secure Marks’s position in Bulls lore.”8 It was his seventh strikeout and 130th pitch of the game.

Marks’s teammates mobbed him at the mound. He was “doused by a water jug and as the last Bulls player to leave the field, posed for one picture holding the ball that produced history.”9 The Syracuse fans gave him a standing ovation, which Marks returned with a tip of his cap.10

Marks had pitched the third no-hitter for the Bulls since their move to Triple A – and their first complete-game no-hitter. Jason Hammel and Juan Salas had combined for a no-hitter against Columbus exactly 10 years earlier, on July 16, 2006.11 Seven years later, four pitchers – Jake Odorizzi, Frank De Los Santos, Kirby Yates, and Jeff Beliveau – no-hit Pawtucket on May 5, 2013.

Marks was called up to the Rays in September. He pitched nine innings in four games. The Rays did not keep him on their roster for the playoffs. Tampa Bay assigned him to the Bulls again in 2017 and he was called up in May when Erasmo Ramirez went on paternity leave. Marks made an appearance in relief on May 5 before the Rays released him four days later. It was his final major-league game.

“As a kid I never really thought about pitching in the big leagues. Of, course I wanted to but I always wanted to pitch a no-hitter, a nine-inning no-hitter,” Marks said in 2022. “It was one of the better moments of my career. I was always proud of myself on going deep into games and being the guy that could throw a lot of pitches so it was that was a special moment for me.”12

This article was fact-checked by Mike Huber and copy-edited by Len Levin. The author is grateful to Andrew Green of the Durham Bulls for providing the play-by-play of the game.

In addition to the sources cited in the Notes, the author consulted Baseball-Reference.com and Retrosheet.org. He also relied on newspaper accounts of the game as well as play-by-play and box scores provided by the Durham Bulls.

2 A fourth-round draft pick out of high school in June 2010, Cole was in his third season with the Chiefs. He spent the opening month of the 2015 season with Washington when Max Scherzer was injured; he had not appeared in the majors since pitching in three games that month. The Nationals called Cole up again in September 2015, but he did not make it into any games. He pitched in 109 major-league games from 2015 through 2021, with four teams.

10 Coincidentally, two other IL teams took no-hitters into the seventh inning or later on the same night as Marks’s gem. Pawtucket’s Henry Owens was perfect before losing a no-hitter with two outs in the eighth against Charlotte. The Indianapolis Indians no-hit Louisville until there were two outs in the seventh. Indians starter Steven Brault pitched six no-hit innings before being relieved by Curtis Partch, who recorded two outs in the seventh before allowing a hit.

11 Durham beat Columbus, 4-1, in that game as Hammel got the first out in the ninth inning before giving way to Salas.