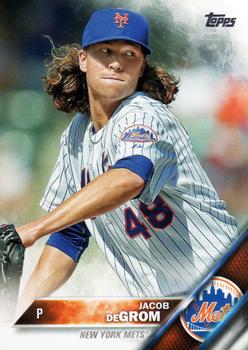 Jacob DeGrom was on his way to becoming the ace of the New York Mets pitching staff in 2015, just his second year in the majors. His 2.54 ERA and 205 strikeouts were the best on the team. DeGrom also played a key role in the postseason as he went 3-1 during the Mets’ march to the World Series.

After carrying much of the load of the Mets pitching staff that year, deGrom struggled with his mechanics when the 2016 season began. But the challenge to iron out his inconsistencies helped him become a better pitcher as “he learned how to pitch rather than merely trying to overpower batters.”1

The hard work seemed to pay off. Leading up to the All-Star Game, deGrom dropped his ERA to 2.61 while striking out 68 in his last 57 innings. Although many expected his manager, Terry Collins, to pick him for the midseason classic, deGrom told Collins that he was tired. Collins decided that his ace “needed the break to exhale, both physically and mentally” and sent him to Florida to rest.2

Coming off those 10 days away from the game, deGrom looked reinvigorated as he took the mound against the Phillies on July 17 at Philadelphia’s Citizens Bank Park. It may have helped that the game took place during a sunny afternoon. DeGrom had a 1.63 ERA in his daytime starts, compared with his 3.19 ERA in night games.

Rookie Zach Eflin took the mound for the Phillies. Philadelphia had called up the right-hander in June. After losing his first two starts, Eflin had won his last two appearances, including a complete-game victory against the Braves on July 5.

Eflin retired New York in order in the first, but the Mets jumped on him in the second. With one out, James Loney hit the ball back to Eflin. The pitcher threw wild in his attempt to get Loney out and Loney was credited with a single and ended up at second on the error. After Eflin retired Asdrubal Cabrera, Loney came home on Juan Lagares’s two-out triple. The Mets were up 1-0 and that run would turn out to be all that deGrom needed. Curtis Granderson’s two-out solo blast over the center-field wall in the second made it 2-0 in the third inning.

DeGrom retired the first eight Phillies he faced. But with two outs in the third, Eflin singled up the middle. DeGrom said later, “I knew who got the hit off me. After that, you want the shutout. I went out there every inning like it was the first inning.”3 Eflin was stranded on first when deGrom got Odubel Herrera to ground back to the mound for an easy toss to first to end the frame.

The Mets scored another run in the fifth. This time deGrom singled with two outs. He crossed the plate when Jose Reyes doubled to center field. Eflin walked the next two batters to load the bases. The rookie, who had allowed just two walks in his last two starts, suddenly couldn’t find the plate. Yet he kept his composure and retired Neil Walker on a groundout down the first-base line.

Eflin retired the Mets in order in the sixth before he was replaced by Daniel Stumpf in the seventh. After the game, Eflin said of his efforts, “I didn’t have my best stuff today, but I was able to battle and limit the damage.”4 He said he still needed to work on executing his pitches better. “Strikeouts are going to come. I’m a contact guy, getting weak groundballs. Obviously there were a lot of balls hit in the air today. I just got to work on getting my sinker down and just finishing guys.”5

DeGrom continued to mow down the Phillies. The next time Philadelphia had a baserunner came in the eighth when Ryan Howard led off with a walk. But once again, deGrom didn’t let the mistake slow him down. He struck out Cameron Rupp and got Freddy Galvis to ground into a double play.

Rupp complimented deGrom afterward, saying, “It’s frustrating when a guy is dominating you for pretty much the whole day. He pitched well. You’ve got to give a little bit of credit to the guy.”6 Mets catcher Rene Rivera said of deGrom, “His pitches were doing good movement down there. We figured out that he was going to have a good day.”7

With two outs in the eighth, the Mets added two more runs. Loney singled and Cabrera then hit his 13th home run of the year, making the score 5-0.

DeGrom threw just 89 pitches through eighth and did not look tired when he took the mound in the ninth. If he could retire the next three Phillies hitters, he would pitch the first Mets one-hitter since May 7, 2013, when Matt Harvey and Bobby Parnell teamed up against the White Sox. The last time a Mets pitcher had gone the distance for a one-hitter was in 2012. R.A. Dickey did that in consecutive games, beating the Rays 9-1 on June 13 and then beating the Orioles 5-0 on June 18.

DeGrom got the first two batters to ground out. Then he needed just three more pitches to get the final out when Herrera chased a 95-mph fastball to end the game. It was his seventh strikeout and came on his 105th pitch.

DeGrom waited on the mound for Rivera, his catcher, to give him the game ball. The win was was deGrom’s first complete-game victory. “Definitely fun, and hopefully I have many more,” he said.8

Collins told reporters after the game that it was clear deGrom’s 10 days of rest had made a difference. He said it was clear that his ace’s “two-seamer looked better than it had all season and that his command finally caught up with his increased velocity.”9

Phillies manager Pete Mackanin was equally complimentary: “He’s got everything you need to be a successful pitcher. Throws strikes, changes speeds, has great location. You look at what he did today with his location and changing speed. Throwing strikes where he wants to.”11

DeGrom perhaps described his efforts best when he said, “I was hoping that I’d have one like this, where you go out there, you feel like everything’s working. But it’s part of the game. You don’t always feel good when you go out there, so you’ve got to find a way. Today I was fortunate enough to feel good and keep them off of the scoreboard.”12

The win raised deGrom’s record to 6-4 and lowered his ERA to 2.38. But deGrom would win just one more game that season and lose his final three starts to finish with a 7-8 record. He struck out just 143 batters that season, the fewest of his career. The one-hitter was a preview of his developing command of pitches that would be fully realized in two years when he earned his first Cy Young Award.