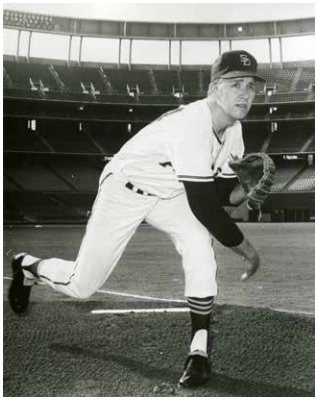 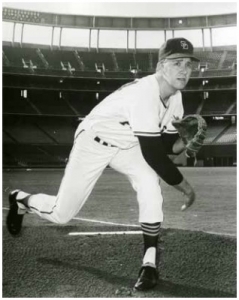 There was also an 11th time, in 1995, if we count Pedro Martinez’s perfect game that wasn’t — nine perfect innings forced to a 10th inning by a 0-0 score, then broken up by Bip Roberts’ double. This one never got on the books because of a 1991 ruling that all no-hitters would have to cover an entire game, no matter how long. Another perfect game near-miss was Pappas losing out after getting an 0-and-2 count on the 27th batter, with the next four pitches just missing the strike zone.

Padres pitchers have got close many times over the years. Probably the most famous is Clay Kirby throwing eight hitless innings, only to be pinch-hit for because the team was losing 1-0, and reliever Jack Baldschun allowing multiple hits. This occurred in 1970, only the Padres’ second season.

There have been had four other occasions in which Padres pitchers carried a no-hitter into the ninth inning: Steve Arlin in 1972, Andy Ashby in 1997, Chris Young in 2006, and Aaron Harang plus four relievers in 2011. There have been five one-hitters in which the hit came in either the eighth or ninth: Kirby in 1971 (Willie McCovey’s eighth-inning homer ruined an otherwise perfect game), Randy Jones in 1975 (a perfect game through seven), Greg Harris and Craig Lefferts in 1991, Andy Benes in 1994, and Chris Young and Cla Meredith in 2006. A special mention should go to Kirby; his near-perfect game was his second straight start taking a no-hitter into the eighth inning.

The Padres closed the 2018 season 44 games short of breaking the Mets’ all-time record of 8,019 games before pitching a no-hitter. As of the start of play in 2019, they are the only active franchise without one.

Getting two strikes on the final batter with one out to go is about as close as one can get. That was Steve Arlin’s fate on July 18, 1972. It also happened in 2011 when the Padres sent five pitchers to the mound on July 9, with Luke Gregerson allowing a double on a 1-and-2 pitch to Juan Uribe of the Dodgers, but the Arlin story has a more interesting ending.

Arlin, a dentist in the offseason and after his career ended, was drafted by Philadelphia in 1966, and made a deal with the Phillies that he would be permitted to complete his dental-school studies each spring before reporting to the minors. But possibly because of that, he was left open in the 1968 expansion draft, from which the Padres selected him 26th out of 30 picks.

Not many people remember that Arlin had been on a tear in midseason 1972. Beginning on June 18, four of his seven starts before his no-hit bid were gems of at least nine innings allowing just one hit or two hits. On June 23 he beat the Giants on a one-hitter and on July 6 he threw one-hit ball for 10 innings in a 14-inning 1-0 win against the Mets.

The game on July 18 was at San Diego Stadium against the Phillies before a crowd of just 4,764. Through the first four innings, Arlin allowed only a first-inning walk to Tom Hutton. San Diego scored in the first on Jerry Morales’s walk and Nate Colbert’s double.

The Padres loaded the bases in the second and put two on in the third, but it was still 1-0 in the fifth inning.

In the Phillies’ fifth, Willie Montanez walked, but two outs later was caught stealing. The Padres scored twice in their half when Morales singled and Colbert homered.

A two-out walk to Larry Bowa in the sixth produced the only other Phillies baserunner before the ninth. The best defensive play of the game came next. Second baseman Derrel Thomas dived to his left to stab a smash by Denny Doyle and threw him out from a sitting position.

In the seventh, Arlin induced three groundballs, by Hutton, Greg Luzinski, and Montanez.

The Padres padded their lead to 5-0 with a triple by Morales, an intentional walk, Cito Gaston’s double, and a groundout.

In the eighth, Arlin struck out Don Money, then retired Oscar Gamble and John Bateman on grounders to third base.

After the Padres failed to score in the eighth, Arlin faced pinch-hitter Deron Johnson to begin the ninth. Third baseman Dave Roberts made a leaping catch of Johnson’s liner. Next up was Bowa, who popped out to second baseman Thomas for the second out.

Denny Doyle was all that was left between Arlin and history. Roberts had been playing the normal strategy of moving in at third base to cover a possible bunt, and as soon as there were two strikes on Doyle, Roberts moved back. But Padres manager Don Zimmer, fearing a possible two-strike bunt attempt, motioned for Roberts to stay in, so Roberts moved back in about eight feet on the grass. With the count 1-and-2, Arlin threw a slider inside, and Doyle hit a one-hop chopper that bounced over Roberts’ head into left field. Roberts probably would have caught the ball with ease had he played back at normal depth.

The no-hitter gone, Arlin appeared to lose his composure and balked Doyle to second, then gave up a run-scoring single to Hutton. Fans urged Arlin just to finish the game, which he did by getting Luzinski to fly out.

Arlin originally thought he had the no-hitter. Not realizing where Roberts was positioned, and seeing the path of the poorly hit ball, Arlin said he was ready to begin celebrating.1

After the postgame radio show, Zimmer took the blame, approaching Arlin with a razor blade and, pointing to his throat, said, “Here. Just make it quick.”2

But Arlin defended his manager, saying he thought both Bowa and Doyle might try to bunt in the final inning.3

Years later, Arlin had this to say: “I should have had my no-hitter. It’s stupid how I lost my no-hitter. It was a case of over-managing. We knew he wasn’t going to bunt with two strikes.”4

Arlin’s start had originally been scheduled for the following night, but was moved up a day so that he could be ready to pitch in the All-Star Game. But National League manager Danny Murtaugh elected to leave Arlin off the nine-man staff,5 despite his run of allowing only 33 hits in 71 innings.

The near-miss was his third two-hitter, along with the preceding two one-hitters in a 31-day span. After that, his career started to spin downward, and although the next season, 1973, featured a four-game span highlighted by three shutouts, the first hit came very early in each of those games. Steve Arlin never came close again.

The author attended the game and had a home-plate view of Doyle’s single.