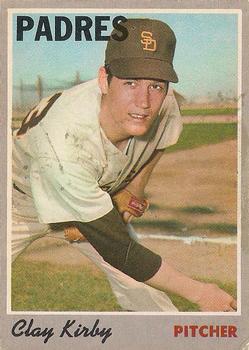 Until 2021 — the franchise’s 53rd season — no San Diego Padres pitcher had thrown a no-hitter. The Padres were the last major-league team to hold that dubious distinction. Yet they might have gotten one as early as their second year in the National League. On July 21, 1970, righty Clay Kirby held the New York Mets hitless for the first eight innings at San Diego Stadium. With two outs in the bottom of the eighth, however, manager Preston Gómez lifted Kirby for a pinch-hitter as the Padres trailed 1-0. San Diego failed to score, and the no-hitter was lost in the top of the ninth. Gómez’s decision was controversial then, and the debate lingered.

“It’s not that I’m bitter,” said Kirby in 1990, a year before his untimely death. “But … when I try to look at the logic behind it, I don’t see it. We … needed something to drum up interest in the ballclub. A no-hitter would have given the franchise a much bigger boost than one more victory. If it had been the seventh game of the World Series, I could understand it, I guess. But we were in last place.”1

On the night of July 21, 1970, San Diego fell behind right away, mainly because of Kirby himself. Tommie Agee walked to open the game and stole second. With one out, Ken Singleton also walked. The Mets then worked a double steal — “I wasn’t careful,” said Kirby.2 Agee scored on a fielder’s choice.

The hole was shallow, but Mets pitcher Jim McAndrew allowed just three hits and no walks while striking out nine. Just two Padres reached second base. Ed Spiezio doubled to start the third inning, and Al Ferrara had a two-out two-bagger in the fourth. After that, all they could muster was a two-out single by Bob Barton in the fifth.

Meanwhile, Kirby had “a real good breaking ball and his fastball was moving,” said Mets outfielder Art Shamsky. Kirby walked just three more; McAndrew came closest to getting a hit. In the eighth, he “drilled a hot grounder to first baseman Nate Colbert, who threw out [Joe] Foy at the plate.”3

Kirby then struck out Agee “on three pitches — fast, faster, and fastest, and see you later. I figured I had a no-hitter in the bag.

“When I came in after that inning, I got a drink of water, and I saw [pitching coach] Roger Craig coming in with a long look on his face. He was really upset, because he obviously wanted me to proceed.

“I knew then that something was up. When I put my helmet on, Gómez called me back. He basically said, ‘Get your butt back here.’ I said, ‘What?’ and that was it. [Clarence] Gaston felt bad. He didn’t want to go up and hit for me.”4

Gaston — the Padres’ batting average leader in 1970 — hadn’t started because of a strained leg muscle.5 Kirby was due to bat third, after Spiezio and Barton. Gómez recalled, “If Spiezio hits a home run or if one of them gets on and I can bunt with Kirby, then he stays in. But my mind was made up to hit for him if neither one of them got on.”6 At the time, he said that if Spiezio had led off with a hit, he’d have had Barton sacrifice and then lifted Kirby. Mets broadcaster Ralph Kiner commented, “The game doesn’t belong to the pitcher. The manager has no choice but to pinch-hit.”7

Gómez had scant precedent. As of 1970, there’d been just two combined no-hitters in the majors, with only one then recognized as such.8 That was the bizarre game on April 30, 1967, in which Baltimore’s Steve Barber and Stu Miller held Detroit hitless yet still lost, 2-1. When Orioles manager Hank Bauer yanked Barber after 8⅔ no-hit innings, there was no dispute — Barber had walked 10 and wild-pitched in the tying run.

In just two other big-league games had a pitcher been lifted with a no-hitter in progress after seven innings.9 The closest parallel to Gómez’s situation came on May 26, 1956. Cincinnati was trailing 1-0 in the top of the eighth when — “shunning tradition and sentimentality”10 — manager Birdie Tebbetts sent up a pinch-hitter for Johnny Klippstein, who’d walked seven. The crowd that day booed, yet the Cincinnati Enquirer didn’t second-guess Tebbetts, writing, “There’s no room for sentiment in baseball. … It was the correct move.”11

On May 22, 1962, Yankees manager Ralph Houk removed Whitey Ford in the bottom of the seventh with the game tied 1-1 — but there was a key difference: a strained back muscle forced Ford to leave his potential no-hitter.12 After Kirby’s game, Houk said he’d have done the same as Gómez.13

Gómez cited success in a similar spot when he managed the Spokane Indians in the Pacific Coast League. His account, however, does not square with the available facts. It has not been possible to determine whether such a game took place.14

Mets ace Tom Seaver said the New York bench “gasped in disbelief” when Gaston was announced.15 The San Diego crowd was a modest 10,373 — but booed loudly. A couple of enraged fans went after Gómez but were restrained.16

Gaston struck out, and Jack Baldschun relieved Kirby. He promptly gave up the Mets’ first hit, a single by Bud Harrelson. Two runs eventually scored to make it 3-0.

McAndrew then set the Padres down in order in the bottom of the ninth to complete his shutout. He retired the last 13 men to face him.

“The reporters … wanted me to say something about Preston,” Kirby recalled. “I couldn’t do that. I respect him as a man and as a manager.”17

Gómez said, “It would have been the easy way out for me to let the kid go up and hit. I hated to take him out, but we needed runs. I don’t play for the fans.”18 He added that winning was also important because the Mets and Pittsburgh Pirates were battling for first place.19

Gómez thought the same way 20 years later. “I always felt that when you’re playing this game, you play to win. I don’t care if we were 160 games behind. I’d do the same thing. The commissioner (Bowie Kuhn) called me and so did several other managers, and they all said it was the only way to play the game.”20

Cito Gaston and Roger Craig — who’d both become managers themselves by then — agreed. So did Dave Campbell, a Padres second baseman in 1970. On September 4, 1974, Campbell was with the Houston Astros — managed by Gómez. Houston’s starter versus Cincinnati, Don Wilson, was in the same boat as Kirby. He had a no-hitter through eight innings but trailed 2-1 because of two walks and an error. Gómez’s strategy was consistent: He pulled Wilson for a pinch-hitter. Campbell said, “I sure do” when Gómez asked if he remembered seeing it before.21 The end result was similar. The Astros couldn’t tie it, and reliever Mike Cosgrove gave up a single to open the top of the ninth.

After that game, Kirby — who’d been traded to Cincinnati after the 1973 season — walked into Gómez’s office at the Astrodome and shook his hand.22 He said, “Preston told me he’d never change his ways.” Indeed, Gómez reiterated, “I play this game to win.”23

Starting in 1975, there have been 12 more combined no-hitters in the majors. Also, from 1996 through 2020, eight pitchers have been removed after going at least seven no-hit innings, and the bullpen subsequently gave up hits.24 Managers today have another excuse to pull a starter during a no-no: pitch limits/protecting pitchers’ arms. Dodgers skipper Dave Roberts did so twice in 2016; for him the decision was hard but clear.25 Marlins manager Don Mattingly did the same in both 2016 and 2017.26

By contrast, when Johan Santana pitched the Mets’ only no-hitter to date27 in 2012, skipper Terry Collins agonized about leaving Santana in even after exceeding his 115-pitch limit. Many argue that ending the club’s notorious 50-year no-hitter drought was costly — Santana made just 10 more starts in the majors.28

Preston Gómez, who died in January 2009, didn’t suffer such doubts. After the Kirby game, he said, “I never second-guess myself. And I can always go home after a game and sleep, figuring I did what I thought was right.”29

Clay “The Kid” Kirby said, “I’m only 22 and I’ll have a lot more chances to pitch one [a no-hitter].”30 He never did, though he came close twice more as a Padre, in consecutive starts in September 1971. Various other San Diego pitchers also had chances but were denied. One of them, 1976 Cy Young Award winner Randy Jones, said in 2015: “I’ve got a feeling the no-hitter is going to come out of nowhere. We keep waiting for that night.” Padres broadcaster Ted Leitner added, “There’s going to be one. The question is just who and when.”31

8 In September 1991, the Committee for Statistical Accuracy reclassified the game of June 23, 1917 — in which Ernie Shore retired 27 straight batters after Babe Ruth’s ejection — as a combined no-hitter.

9 Two other pitchers had thrown games of seven-plus hitless innings without being relieved. They were also declassified as no-hitters in 1991 because they did not go the regulation nine. On August 27, 1937, Fred Frankhouse pitched 7⅔; on September 26, 1959, Sam Jones pitched seven. Rain ended both of those games.

14 “Padres’ Kirby Loses No-Hit Bid,” Tucson Daily Citizen, July 22, 1970: 31. According to Gómez, “Phil Ortega was pitching a no-hitter for eight, I batted for him in the bottom of the eighth, the pinch-hitter, Tony Roig, doubled and we won the game 2-1.” Gómez managed Spokane from 1960 through 1962. During this period, Roig played for Spokane only in 1960, and Ortega pitched just seven innings in three games for Spokane that year.

32 The drought had spanned 8,205 regular-season games and 40 postseason games. Kirk Kenney, “Musgrove’s gem gives Padres no-no watcher cause for pause,” San Diego Union-Tribune, April 10, 2021. It was the second-longest such drought in major-league history after the 8,944 games between  no-hitters for the Philadelphia Phillies from May 1, 1906 (Johnny Lush) to June 21, 1964 (Jim Bunning). Sarah Langs and Manny Randhawa, “9 amazing facts about SD’s first no-hitter,” MLB.com, April 10, 2021.