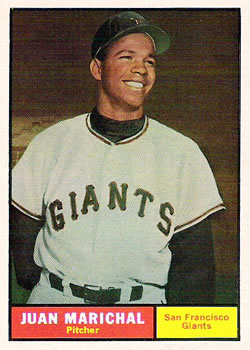 Not every pitcher starts his career on a high note, but Juan Marichal certainly did. The first major-leaguer he faced — Phillies shortstop Ruben Amaro — took a called third strike. Amaro was the first — and last — of 19 consecutive batters Marichal retired to begin his initial game on the mound for the San Francisco Giants.

A right-hander, Marichal was discovered in the Dominican Republic by scout Ignacio Martinez,1 and in 1958 he joined Michigan City of the Class D Midwest League, a Giants affiliate. He quickly impressed his employers, showing great control, and virtually no need for coaching. Marichal compiled a 21-8 record for Michigan City, and added two more wins in playoff games. He owned the league’s lowest earned-run average (1.87) and racked up over one strikeout per inning.

Marichal returned home to win another five games in the Dominican Winter League before joining Springfield of the Class A Eastern League in 1959. There, Marichal won another ERA crown, pitched eight shutouts, and finished 18-13.

He nearly stuck with the Giants out of spring training in 1960, showing them enough speed and control to pitch in the majors, but was assigned to Triple-A Tacoma in order to pitch regularly and gain more seasoning. Marichal, nicknamed “Dominican Dandy,” was tabbed as a sure major leaguer while sailing through the first portion of Tacoma’s Pacific Coast League schedule.2 He was throwing a fastball, curve, changeup, slider, and screwball, and had excellent control, whether he threw from an overhand, three-quarters, or side-arm angle. His pitching delivery featured a unique high front-leg kick. As Carl Hubbell, head of the Giants farm system, explained, “Most pitchers, starting out, copy some pitcher, but Marichal doesn’t look like anybody I’ve seen, except Marichal.”3

On July 10 the Giants sold pitcher Joe Shipley to Tacoma so they could add Marichal — 11-5 in the PCL — to their roster.4 The move was made to bolster their sagging pitching, and Marichal accomplished the task. He registered a 6-2 won-lost mark with the Giants, and a team-best 2.66 earned-run average in his 11 starts.

The Giants summoned Marichal during the All-Star break, and manager Tom Sheehan saved his rookie’s debut for the first game of a three-game homestand against the seventh-place Phillies. Fifth-place San Francisco (41-40) had won nine of its first 11 games against Philadelphia — four by shutout — so Sheehan thought it was a team Marichal could beat. The young pitcher’s unveiling — July 19, 1960, at Candlestick Park — proved Sheehan right. Marichal held Philadelphia to one hit, struck out 12, and won 2-0 in the best outing of his rookie season.

Marichal breezed through the Philadelphia lineup without a blemish for six innings. No one reached base, and nine of the first 18 Phillies he faced struck out, including four in a row bridging the second and third innings. Marichal “had a great jumping fastball, which he used for most of his strikeouts.”5 In the fourth — the only inning in which he did not record a strikeout — Marichal got defensive help from shortstop Eddie Bressoud, who deprived Amaro of a hit by racing to his left and fully extending his arm to grab Amaro’s line drive up the middle.

The Giants backed Marichal with one run in the second and another in the fifth. Orlando Cepeda tallied the first run. He doubled when Philadelphia’s Bobby Del Greco slipped while chasing his high fly to center field. Cepeda took third on Hobie Landrith’s single to right and scored on Jim Davenport’s smash past third base. Willie Mays scored the fifth-inning run. He reached base on a fielder’s choice, stole second — his 20th stolen base of the season — and came home on Willie Kirkland’s single.

Marichal tasted pitching adversity for the first time in the seventh inning. After Amaro struck out, Tony Taylor hit a slow roller and made it safely to first base when Bressoud charged in but muffed the ball. The crowd cheered when an “E” for error flashed on the scoreboard. Marichal’s perfect game was gone, but still no Phillies batter had a hit.

Perhaps Marichal was unnerved by the miscue, because his control temporarily left him. He ran up a full count on Johnny Callison, including a wild pitch that allowed Taylor to advance to second base. Callison drove the full-count pitch to deep right field, but Kirkland — with his back against the fence — caught his long fly for the second out. After the game, with Cepeda interpreting, Marichal confessed his fear that Callison’s clout was a home run to tie the game. According to Allen Lewis of the Philadelphia Inquirer, if the wind had been blowing as hard as it normally did at Candlestick Park, the ball would have cleared the fence. Instead, “there was almost no breeze at the time.”6

Marichal had two outs, but he needed one more, and it did not come easily. He issued his only walk of the game, to Pancho Herrera. With runners at first and second, and the Giants’ lead in jeopardy again, “Walpole Joe” Morgan7 hit a pitch hard to center field, only to see Mays run back and snag his liner for the third out.

In the eighth, Marichal seemed to be back in command. He coaxed a fly ball for the first out, then struck out Del Greco looking. With two outs, left-handed Clay Dalrymple, pinch-hitting for right-handed Cal Neeman, connected with the first pitch he saw for a solid single to center field. It was Philadelphia’s only hit. According to Marichal, it was a low curve, and “a good pitch.”8 Despite losing the no-hitter, Marichal remained composed. Tony Gonzalez — another left-handed pinch-hitter — could only manage a foul pop fly, which dropped into the catcher’s mitt for the third out.

The ninth was easy for Marichal. He finished off the Phillies with a strikeout — number 12 — and two fly balls. As Mays caught Callison’s fly for the final out, Marichal rejoiced in a shutout, and his first major-league win. Cepeda threw his arms around him, and the Giants smothered him as he came off the mound. It was an impressive performance. Afterward, Marichal touted his fastball as his best pitch, but he also had thrown an effective slider.

Before July ended, Marichal registered two more complete-game victories. On July 23 he limited the first-place Pirates to four hits, beating them 3-1. He followed that on July 28 with a 3-2 win over the second-place Milwaukee Braves, in a 10-inning contest. Warren Spahn was the losing pitcher.

When he retired in 1975, Marichal could claim 243 wins and 52 shutouts, but one of his most memorable games was this shutout of Philadelphia in his first appearance with the Giants. He entered the National Baseball Hall of Fame in 1983.

7 This was the Joe Morgan who later managed the Red Sox, not the Hall of Fame second baseman.