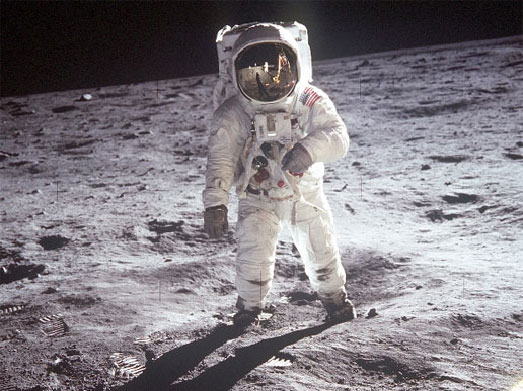 Astronaut Neil Armstrong sets foot on the surface of the moon on July 20, 1969. (NASA)

Jack Aker zipped a sidearm1 strike over the plate to run the count to a ball and two strikes on Washington third baseman Ken McMullen. Catcher Jake Gibbs casually stood and tossed the ball back to the mound. McMullen took the call in stride as he looked back over his left shoulder, toward the dugout.2

It was an ordinary sequence in a seemingly ordinary July contest, the 98th game of 161 the Yankees would play in 1969.

But the humdrum soon gave way to an exhilarating moment. Umpire Ron Luciano walked from behind home plate and waved his arms in the air to stop play.

Over the speakers, public address announcer Bob Sheppard spoke to the 34,000 or so people inside the ballpark.3 While it may have been a typical day for the players, high above the famous Yankee Stadium façade, beyond the clouds and up among the stars, something extraordinary was happening.4

“Ladies and gentlemen, your attention please …”5

Sheppard’s words echoed throughout the enormous ballpark on East 161st and River Avenue.

Many, if not all, likely felt the gravity of the moment and knew the reason Sheppard’s voice, a smooth baritone that in the years to come would be called the voice of God, had suddenly permeated the park, commanding attention.

The game was tied 2-2 in the eighth. The Senators had runners on the corners with no one out.

While caught up in the moment of the game, many, too, were concerned for those three brave astronauts soaring miles above the cloudy, 71-degree Bronx day, in the cold, dark depths beyond the Earth’s atmosphere.

All ears tuned to Sheppard as he continued.

Those remarkable 13 words were all fans needed to hear. They erupted with joy, likely missing Sheppard’s last three words: “… on the moon.” The crowd cheered for a good 45 seconds, many waving bats — it was Bat Day again at Yankee Stadium7 — while reading the scoreboard message that confirmed Shepard’s announcement.8

“Theyre [sic] on the moon,” the scoreboard displayed, the apostrophe dropped in the haste of the moment.9 Sheppard kept reading, but his words were mostly inaudible against the cheers for the astronauts who had just become the first humans to land on the lunar surface.

Word had traveled quickly from the moon, back to NASA headquarters in Houston and then to the Bronx. As soon as the lunar module landed, astronaut Neil Armstrong radioed confirmation back to Earth.

It was 4:17:40 p.m. Eastern daylight time, seconds ahead of Sheppard’s announcement.

“Houston,” he said, “Tranquility Base here. The Eagle has landed.”10

While elation in the stands was soaring to 240,000 miles above the Earth, most of the players did not look at the scoreboard and “seemed confused and impatient,” Leonard Koppett wrote in the New York Times.11

Sheppard asked for a moment of silent prayer for the astronauts’ safety. Stadium organist Eddie Layton followed the silence with his rendition of “American the Beautiful.”12

The game resumed and Aker got McMullen to hit a bouncer to third baseman Jerry Kenney. He threw home to nab Mike Epstein racing in from third for the first out.

Moments later, after Aker hit Hank Allen with a pitch, the Yankees got out of the jam with an inning-ending double play on a bouncer back to the pitcher. Aker threw home to Gibbs who fired the ball to first baseman Jimmie Hall.

The tension on the diamond had dissipated, for now.

It began building more than two hours earlier, at 2:02 p.m., when Yankees starter Bill Burbach delivered the game’s first pitches and got Washington lead-off hitter Del Unser to fly out to center field.

The right-hander subsequently retired the next two Senators on fly balls to center and left field, respectively, for a quick 1-2-3 inning. It happened about 20 minutes after Armstrong, at 1:50 p.m., had released the lunar module from the command ship and piloted it toward the moon.

The Yankees’ offense made some noise in the bottom of the first but never took flight. Horace Clarke led off with a walk and stole second two batters later. After Bobby Murcer flew out to center for the second out, Roy White walked to put runners on first and second. But Washington starter Jim Hannan struck out Jimmie Hall to end the threat.

In the second, Washington slugger Frank Howard punched a single past short, and McMullen slapped a pitch to center to put runners on first and second. Bernie Allen hit a Burbach pitch to deep right for an out. Howard tagged and advanced to third; McMullen remained at first.

When Michael made his second error in a row, dropping Clarke’s flip to second on Jim French’s grounder, the bases were loaded. Burbach struck out Ed Brinkman but walked Del Unser, forcing McMullen home for another run. The Senators led, 2-0.

Michael atoned for his fielding miscues in the bottom of the inning with a single through short. After Ron Woods lined out, Michael stole second with Gibbs batting. Gibbs hit a slow grounder to second baseman Bernie Allen, who fielded it cleanly, but his throw missed Epstein at first. Michael alertly dashed home, cutting the Senators’ advantage to 2-1.

In the top of the third, a couple of Burbach walks and a passed ball loaded the bases with Senators with two outs. It was enough for Yankees’ skipper Ralph Houk to replace Burbach with Steve Hamilton. The lefty promptly worked his way out of this jam by striking out French.

Burbach left the game having pitched 2 2/3 innings, giving up two runs — only one earned — and recording two strikeouts and three walks.

Singles from Hall and Michael in the fourth put the Yankees in position to tie the game or, possibly, go ahead. Senators manager Ted Williams brought in Bob Humphreys in relief for Hannan.

Humphreys forced Woods to fly out to right, and Hall advanced to third. The Senators’ reliever then tried to pick off Michael but threw the ball past first baseman Epstein. It rolled to the wall down the first-base line. Hall darted home to tie the game at 2-2. Michael, however, was thrown out at second.15

Meanwhile, as the innings wore on, tense moments continued between Houston and the moon. At one point, the airwaves went silent for minutes, which probably seemed like days. Soon, though, communication was established with Lieut. Col. Michael Collins, who piloted the command ship. “Listen, baby, things are going just swimmingly, just beautiful,” he said.16

It was 3:46 p.m. It was another suspenseful two minutes before mission control heard from Armstrong as he took manual control of the module, avoided craters the size of a football field, and — with his heart racing to a 156 beats per second at one point — descended to the moon.17

Back in the Bronx, the game advanced quietly until those tense moments in the eighth when the Senators put runners on first and third with no outs and Sheppard broke the news about the fate of America’s three astronauts.

Aker had taken the mound for the Yankees in the top of the inning, relieving Hamilton, who struck out five and allowed only a hit in 4 1/3 innings.

Both teams’ offenses went out quietly in the ninth. The Senators attempted a rally in the 10th, but a double play negated a lead-off single and Epstein was stranded at second after his ground-rule double.

Aker found himself in a jam in the 11th after giving up a single, a stolen base and a couple of walks — one intentional. But he induced light contact from Epstein on a ball back to the mound. Acker threw to first for the putout.

With two hits already, Michael stepped to the plate and smacked a hard grounder. Second baseman Tim Cullen dove and knocked it down. The ball squirted about 10 feet away from Cullen, who raced to pick it up. The speedy White was blazing down the third base line when Cullen fired wild and too late to the plate.18

White’s run gave the Yankees a 3-2 win in the bottom of the 11th inning.

More than five and a half hours after the game had finished, at 10:56:20 p.m., Armstrong made “one small step for man, one giant leap for mankind,” he said, as he walked out of the lunar module, made his way down a nine-step ladder and, for the first time in human history, stepped onto the surface of the moon.19

In addition to sources cited in the Notes, the author used the Baseball-Reference.com and Retrosheet.org websites.

2 In the Shadow of the Moon. Directed by David Sington. Thinkfilm and Discovery Films. Sept. 7, 2007.

7 Joseph Durso, “Yanks Beat Senators, 9-0, Then Lose 4-0, to 2-Hitter, New York Times, June 16, 1969, Section 5, page 2. The Yankees held their first Bat Day of the season on June 15, 1969, giving away free bats to children under 14. Twice during rain delays, many of the youngsters swarmed the field with their bats and “slid into second base, danced on the infield and outfield, tore the Yankees’ $10,000 tarpaulin and littered the diamond with debris,” the New York Times reported the next day. The Yankees defeated the Seattle Pilots 4-0. The game was called in the sixth because of muddy conditions, the umpires said. Seattle claimed the game was called because stadium security was unable to corral the rambunctious youngsters.

9 In the Shadow of the Moon.