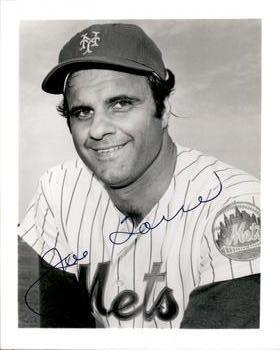 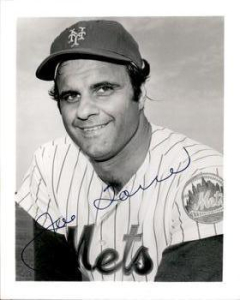 With his chokes-up-on-the-bat stance, second baseman Félix Millan built a career as a singles hitter. His 12-year tenure in the majors ended with 1,617 base hits. But extra-base hits and home runs numbered 289—less than 20 percent of the total.

Millan’s performance on July 21, 1975, may best represent this cornerstone of his contributions, which also included leading the major leagues in 1975 with 162 games played. In the Mets’ home game against the Houston Astros that night, Millan went 4-for-4. But Joe Torre’s quartet of double-play grounders blocked the Mets from capitalizing on the prodigiousness of the Puerto Rico native, leading to a 6-2 Mets loss to the Astros.

The Millan-Torre production was indicative of the recent see-saw performance for Shea Stadium’s residents.

In its prior four series, New York’s NL club lost three of four to the Phillies; won all three games against the Braves; were swept by the Reds in a four-game stay at Riverfront Stadium; and emerged with two of three victories in another NL showdown with the Atlanta Braves.

The Mets had won the previous afternoon against the Astros in a 10-9 effort. Dave Kingman crushed two home runs, including the game-winner off Wayne Granger in the eighth inning, to rally New York from an early 7-1 deficit.

The Mets’ rebounding caused excitement as palpable as the bass line on a mid-1970s disco song. But when Houston jumped to a two-run lead in the top of the first inning, groans could be heard from the Flushing faithful. Southpaw George Stone began by giving up singles to Wilbur Howard and Greg Gross, who wound up on second and third because of a throwing error by Mets shortstop Mike Phillips on Gross’s infield hit.

Astros righty Ken Forsch retired Mets leadoff batter Del Unser in the bottom of the first with a fly ball to Cabell in left field. Millan followed with a single, another example of being a cornerstone in the Mets’ offense; his 2-for-5 performance in the previous day’s comeback win testified to his prowess.

Torre then hit into the first of his four double plays. Pitcher Forsch fielded Torre’s groundball and fired it to second baseman Larry Milbourne for the force out; Milbourne completed the two-fer by throwing to Bob Watson at first base.

At the time, it was a mere disappointment that Torre—who had come to the Mets in a trade with the Cardinals during the previous October—did not advance Millan with his bat or a walk. By the end of the game, disappointment turned to dejection.

Millan’s one-out single was the only hit in the inning’s bottom half.

The Astros expanded the Mets’ deficit to 3-0 in the top of the second. Milbourne singled and advanced on Forsch’s sacrifice bunt, which was a fielder’s choice resulting in the Houston hurler getting to first base safely. Howard’s double sent Milbourne home.

New York made the score 3-1 on Rusty Staub’s solo homer to lead off the bottom of the second.

Houston responded by increasing the lead to 5-1 in the top of the third. Watson and Johnson banged singles. Rader arrived safely at first on a grounder to third baseman Torre, who forced out Johnson at second; Watson went to third. Both runners scored easily on Roger Metzger’s triple. The Astros shortstop smacked nine three-baggers in 1975, tying for sixth place in the senior circuit with Bake McBride, Larry Bowa, Derrel Thomas, and Ken Griffey.

Mets skipper Yogi Berra brought in righty Ken Sanders, who retired Milbourne for the third out on a fly to Unser in center field.

With one out in the bottom of the third, Millan got his second single of the game, following Unser’s single. But Torre’s double-play grounder to Metzger stopped the potential rally.

Mets fans groaned as Houston’s lead became 6-1 in the top of the fourth. Howard and Gross repeated their first-inning exploits with successive singles, putting runners on first and third. Cabell’s grounder to Phillips forced out Gross at second, but Howard crossed home plate.

After Phillips’ strikeout to lead off for the Mets in the bottom of the fifth, Jack Heidemann batted for Sanders and made the second out on a fly ball to Howard in center field. Unser followed with another fly to center for the third out.

Right-hander Hank Webb became the third Mets pitcher of the game, taking the hill in the top of the sixth and striking out Forsch and Howard. Left fielder Kingman snared Gross’s foul ball to end the inning.

Millan led the bottom of the sixth with his third single, but it was déjà vu for the blue-and-orange when Torre grounded into another double play, this time to second baseman Milbourne.

Kingman’s solo homer in the bottom of the seventh—his third in two games—accounted for the Mets’ second run.

Mets lefty Rick Baldwin pitched for the rest of the game. In the bottom of the eighth, Unser’s bunt single and Millan’s fourth single of the game gave a boost of hope. But Torre’s 6-4-3 double play must have made the Mets rooters feel as though they were on an emotional roller coaster. As fast as their spirits lifted, they descended.

Forsch walked Staub, prompting hopes for Kingman to smack a second homer and close the scoring gap by a couple of runs. It was not to be—the slugger’s “towering shot” to Howard didn’t quite clear the Shea Stadium center-field wall.

Millan ended the season with a .283 average. His offense was solid, but his 4-for-4 game ranked among his most memorable achievements.

Torre, a nine-time All-Star and 1971’s National League MVP, had brought star power to Queens in the October trade for hurlers Ray Sadecki and Tommy Moore. After the game, he revealed his thoughts during his fourth trip to the plate. “But I wasn’t so concerned with hitting into another double play, because if I was, I would have struck out. It was more of leaving all those men on base.”1

Forsch said that every double-play ball hit by the Mets’ third baseman came on a slider.2

Torre also explained his batting philosophy. “I’m always going to be aggressive swinging. I’ve hit into three double plays before. If I was worried about a fourth, I’d have struck out. I’ve led the National League in double plays a couple of seasons.”3

There was a bright spot for the Mets—Shea Stadium passed the 1 million mark in attendance for the season; witnesses to Millan’s feat totaled 13,414.

The Astros’ victory was a welcome stop to a recent skid—the club team lost six of its last seven contests. It might have been a greater margin, though. Houston’s All-Star center fielder César Cedeño sat out the game on the disabled list. He had a split right thumb courtesy of a fly ball that got “lost in the sun” and bounced off his glove during the previous day’s game.4