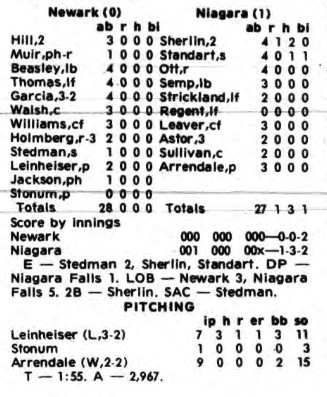 was the opposing pitcher when Don Larsen hurled his perfect game in Game Five of the 1956 World Series. Maglie threw a no-hitter of his own for the Brooklyn Dodgers only two weeks earlier, a 5-0 win over Philadelphia. As a big-league coach, he was in the dugout for no-hitters by Earl Wilson and Bill Monbouquette. But the game Maglie called “the easiest no-hitter I ever saw”1 wasn’t any of those. It was thrown by a minor leaguer in the Pittsburgh Pirates system who pitched just 19 games as a professional, and was witnessed by fewer than 3,000 people on a Thursday night in Niagara Falls, New York.

In the summer of 1970, Maglie – a year removed from his stint as pitching coach for the Seattle Pilots – was back in his hometown, working as the general manager of the Niagara Falls Pirates of the short-season Class A New York-Penn League. Thirteen years later, the Pirates’ ballpark was renamed in Maglie’s honor. But in 1970 it was still known as Hyde Park Stadium, named for the large city park in which it sits.

That year’s edition of the “Baby Bucs” didn’t distinguish itself. The team compiled a 28-40 record, which placed it seventh in an eight-team league, 14½ games behind Auburn. The most widely known people affiliated with the team were probably Maglie and manager Irv Noren, a fellow Western New Yorker who played on three World Series-winning Yankee teams in the 1950s. Three members of the 1970 Niagara Falls team, pitcher Lafayette Currence and outfielders Ed Ott2 and Omar Moreno, later reached the major leagues. Of that trio, only Ott appeared in Niagara Falls’ home game of July 23, 1970, starting in right field.

The starting pitcher that night was Charlie Arrendale, signed by the Pirates a month and a half earlier as a 20th-round draft pick.3 The 5-foot-8, 155-pound Arrendale played at Anderson (Indiana) College under former Dodger Carl Erskine – also the author of a big-league no-hitter – before transferring to Marion College, also in Indiana. There, Arrendale threw a no-hitter with 23 strikeouts and led the NAIA with 127 K’s his senior year.4 He was the first Marion player to go on to professional baseball.5 For his full rookie year as a pro, Arrendale posted a 5-5 record and a 2.62 ERA in 12 games, with 86 strikeouts in 79 innings.

The visiting team, the Newark (New York) Co-Pilots, was a Milwaukee Brewers farm team skippered by former minor leaguer Sandy Johnson. The Co-Pilots were launched as a Seattle Pilots affiliate in 1968, and Maglie coached for that year’s incarnation of the team before moving up to the big club for its first and only season in 1969.6 The Co-Pilots came into the game against Niagara Falls having lost 10 of their last 14 games, a skid that saw them drop from first place to fourth.7 Only one member of the Co-Pilots, infielder Pedro Garcia, went on to the major leagues, and he started at third base on July 23. Garcia led the league in home runs that year with 14.

Newark’s starting pitcher that night also put up formidable, league-leading statistics. Bill Leinheiser, a 6-foot-4 rookie righty from Arizona State University, finished the 1970 season with a 9-2 record and a league-best 1.01 ERA. In 11 starts, he recorded 10 complete games and four shutouts, and struck out 90 hitters in 89 innings.8

The first two innings of the Leinheiser-Arrendale duel passed uneventfully, but the third inning brought more excitement. In the top half of the inning, Newark right fielder Dennis Holmberg chopped a bouncer between third base and shortstop. Niagara Falls shortstop Rich Standart rushed an off-target throw that bounced off first baseman Mike Semp. The play was scored an error.9 Arrendale worked past the misplay without further incident.

In the bottom of the third, Arrendale failed to help his cause at the plate. With catcher John Sullivan on first10 and nobody out, Arrendale missed a hit-and-run sign and did not swing, and Sullivan was thrown out at second. Arrendale completed his at-bat by striking out. But the Pirates were not done. Second baseman Ed Sherlin doubled to left-center field, and shortstop Standart drove him in with a single to right to give the home team a 1-0 lead.11

From that point on, the highlights belonged entirely to the pitchers. Newark’s Leinheiser walked only three and struck out 11 in seven strong innings before leaving for a pinch-hitter. He allowed only one additional hit, a single by Sherlin. Reliever Rich Stonum took over in the bottom of the eighth and whiffed all three hitters he faced.

The Co-Pilots’ bats were even quieter. According to news accounts, the team managed only one truly hard-hit ball the entire night, when power threat Garcia smacked a fourth-inning line drive directly at Niagara Falls center fielder Alberto Leaver. Arrendale scattered two walks, and the Pirates made a second error behind him. No other Co-Pilots reached base, as Arrendale alternated a live fastball with an effective curve – a pitch Maglie had advised him to use more frequently.12

Catcher Sullivan later said that Arrendale’s stuff was better at the end of the game than it was at the start.13 In the eighth inning, with the fans alert to the possibility of a no-hitter, he struck out the final two hitters. Then he began the ninth by striking out first baseman Leon Beasley and left fielder Price Thomas. The dangerous Garcia was the last threat to the no-no, and he ran the count to 2-and-2. Arrendale shook off Sullivan’s call for a fastball, but Sullivan stuck with the request, and Arrendale delivered a knee-high heater for his 111th pitch of the night. Garcia swung and missed to seal the no-hitter.14 It was Arrendale’s 15th strikeout.

Maglie summarized the outing by saying, “There was nothing that came close to being a hit.” Newark manager Johnson praised Arrendale’s control and mix of pitches, and agreed that Standart’s play on Holmberg’s groundball was correctly scored as an error rather than a hit.15

The noteworthy figures in the July 23 game scattered on different paths after the 1970 season ended. Maglie left Organized Baseball for good, working for a liquor distributor and the Niagara Falls Convention Bureau.16 Niagara Falls manager Noren won three World Series rings as a coach with the 1972-74 Oakland A’s dynasty, while right fielder Ott played for the 1979 World Series champion Pittsburgh Pirates. Garcia hit 15 homers as a rookie with the 1973 Brewers and led the American League with 32 doubles, but struggled to hit for average during a five-year big-league career. Holmberg became a minor-league manager of many years’ standing, beginning with the 1977 Co-Pilots, and also served in 1994 and 1995 as the Toronto Blue Jays’ bullpen coach.

Available sources do not specify what happened to Arrendale’s career, but he pitched in only seven games in 1971 with the Monroe Pirates of the Class A Western Carolinas League before leaving pro ball. News clippings from 1972 show him pitching in the amateur Eastern Indiana Baseball League. In recent decades, he has owned his own business in the Marion, Indiana, area; coached three high-school baseball teams; and offered free athletic instruction to local youth.17 It’s unclear how many of those young athletes have heard about the night Arrendale’s pitching earned praise from a big-league legend.

Neither Baseball-Reference nor Retrosheet provides box scores of minor-league games, but the July 24, 1970, editions of the Geneva (New York) Times and Niagara Falls (New York) Gazette published box scores. The box score that accompanies this piece appeared in the Geneva newspaper.

The author thanks fultonhistory.org for making the cited newspapers available online.

2 While Ott played almost entirely as a catcher during his eight-year big-league career, he appeared exclusively in the outfield with Niagara Falls in 1970. Niagara Falls’ starting catcher on July 23, 1970, was John Sullivan, a 21-year-old rookie who hit .103 in 55 games.

10 Sullivan reached base either through a walk or an error but game accounts are not specific.