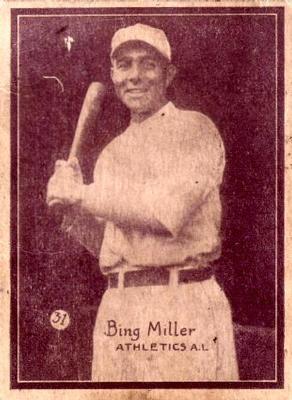 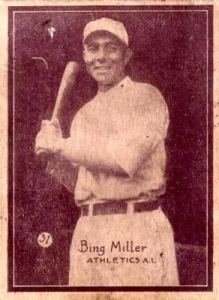 On July 9, 1930, the New York Yankees defeated the Philadelphia Athletics by a 12-6 score at Yankee Stadium. The loss dropped the reigning World Series champions into second place in the American League. Connie Mack’s club trailed the Washington Senators by a scant half-game. The Mackmen won their next eight games, from July 10 to July 18, and recaptured first place from the Senators, leading the Nats by 3½ games on the 18th.

After Philadelphia and Detroit split a four-game set, the A’s margin over the Senators was four games as they headed to Cleveland for a four-game series at League Park against the Indians. Earlier in the season (June 11-13), the visiting A’s were swept in three games by the Indians.

Philadelphia (64-32) had a commanding 15-game lead over fourth-place Cleveland (49-47) as the series got underway. In the opener, on July 24, Jimmie Foxx unloaded his 27th home run of the season in the top of the ninth inning, delivering the Athletics an 8-6 victory. Eddie Rommel (7-3) pitched four innings of relief to get the win.

The pitchers for the second game of the series were the Athletics’ Lefty Grove (13-4, 2.94 ERA) and Pete Jablonowski (4-4, 3.69 ERA) for Cleveland.1 Grove was one of the top hurlers in the junior circuit and he was well on his way to his fourth straight 20-win season in 1930. Jablonowski was used primarily as a relief pitcher and sometimes a spot starter by Cleveland manager Roger Peckinpaugh. The young right-hander was making his sixth start of the season.

The A’s showed their power right off the bat as Max Bishop led off the game with his ninth home run of the season, over the right-field wall. The A’s were far from done as Jablonowski pitched himself into a bind. He walked Mule Haas, got Mickey Cochrane on a popup to second base, and then walked Al Simmons. The A’s had runners on first and second when Foxx bounced one back to the mound. As Jablonowski threw out Foxx, the runners moved up to second and third. Bing Miller slapped a ball to third that took a big hop. Miller beat Cleveland third baseman Joe Sewell’s throw to first base, and Haas scored the Athletics’ second run. Jablonowski walked Dib Williams to load the bases. Simmons, on third base, made a clean dash for the plate, beating Jablonowski’s throw home to catcher Joe Sprinz. Miller and Williams also moved up, giving the A’s a triple steal and a 3-0 lead. Jimmy Dykes grounded out to shortstop to end the inning.

Philadelphia added an unearned run in the top of the second inning to extend its lead to 4-0.

Dykes led off the top of the fourth inning with a double to left field. Grove’s sacrifice moved Dykes to third base. When Jablonowski walked Bishop, his day was ended. Peckinpaugh replaced him with reliever Milt Shoffner. The southpaw from Sherman, Texas, failed to provide what he was being paid to deliver – relief. Shoffner walked Haas to load the bases. Cochrane hit a grounder to Sewell at third, who threw home to force Dykes, but Simmons hit a sharp single to left field, scoring Bishop and Haas. Cochrane raced to third base and Simmons took second on an errant throw by Cleveland left fielder Bob Seeds. Foxx was intentionally walked, and the bases were loaded again, with Bing Miller coming up to bat. Cochrane made a break for home while Shoffner was in his windup. Cochrane scored easily and Simmons and Foxx also moved up. Philadelphia had executed its second triple steal of the game. Miller followed with an inside-the-park home run to left field, and the Athletics led 10-0.

Grove was humming along, and the Cleveland bats were offering little resistance. Although Grove struck out only one batter through the first five innings, he was in control and dominated the Indians lineup.

Simmons, leading off the top of the sixth inning, swatted his 23rd home run of the season, to center field. After Shoffner gave up singles to Miller and Williams, Peckinpaugh went to the bullpen again, summoning right-hander Belve Bean. Miller, who had gone to third on Williams’s hit, scored on Dykes’ groundout to shortstop.

After Philadelphia built its lead to 14-0, Cleveland avoided the shutout by scoring a run in the bottom of the eighth inning to make the final score 14-1. Grove (14-4) went the distance, surrendering six hits, striking out two, and walking none. The Cleveland pitchers surrendered 14 runs, 12 hits, and 10 walks.

Bing Miller was the A’s hitting star, going 4-for-5 with four RBIs and three runs scored.  Simmons and Dykes each knocked in three runs.

Philadelphia beat the St. Louis Cardinals in six games in the World Series. (St. Louis would get its revenge in 1931, defeating the A’s in seven games.)

Jablonowski/Appleton’s catcher that day, Joe Sprinz made fame when he was mentioned in the Guinness Book of World Records for catching a baseball dropped from an airship in July 1931. The force of the catch broke Sprinz’s jaw.2

However, Sprinz said it didn’t happen. “I never caught a baseball dropped from an airship,” he said in 1973. “In 1939, long after I left the Indians, I was catching for the San Francisco Seals of the Pacific Coast League. In July, Walter Mails, who once pitched for the Indians, got an idea to have Lefty O’Doul, our manager, drop baseballs from the Tower of the Sun, built on Treasure Island for the World’s Fair. I caught five in a row. The Tower was 450 feet high.

“The dirigible was about 1,200 feet high. The first ball that was released fell into the stands. The second ball I saw, but never caught up with it. The third one was dropped from the dirigible. I had to shade my eyes from the sun but I saw it all the way. It looked like an aspirin tablet. The ball hit me in the mouth. My lips were lacerated very badly, there were 12 cracks in my upper jaw, and I lost five teeth.

“I was knocked out. I should have been a fighter. I was laid up all winter, but the next season, 1940, God was good to me. He gave me the courage to go on catching seven more years. So whatever you heard, I did not catch that ball.”3

The author accessed Baseball-Reference.com for box scores play-by-play and other data, as well as Retrosheet.org.

The author accessed the Philadelphia Inquirer for all the details of the game, July 26, 1930.

1 Pete Jablonowski pitched for Cleveland until 1932, when he was traded to the Boston Red Sox. Jablonowski was sent to Newark of the International League in 1933. After a couple of seasons, the hurler resurfaced with Washington for the 1936 season. In 1933 Jablonowski had changed his name to Appleton. SABR member Bill Lamb wrote Appleton’s bio for the SABR BioProject. Lamb wrote that although there were many guesses given for the change, the reason is not known. Bill Lamb, “Pete Appleton,” SABR BioProject,  https://sabr.org/bioproj/person/pete-appleton/. Accessed August 19, 2020.