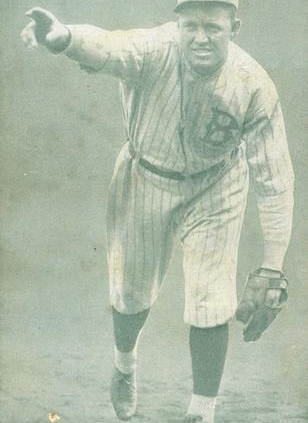 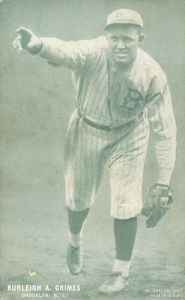 On July 26, 1921, when the Robins began their second long Western trip of the season, Brooklyn had a .500 record and was barely in the first division, just two games ahead of fifth-place St. Louis. According to the Standard Union (Brooklyn), the 15 straight road games would determine “whether or not [the Robins] are to be a first division outfit this year.” The writer was confident that if the team won the majority of the games away from Ebbets Field, there was “little chance of their being overhauled by any of the second division teams.” Not hesitant to think even bigger, the reporter thought, or hoped, an “exceptionally good showing” would give them an “excellent chance” of finishing higher.1 Since the Robins were 14½ games behind first-place Pittsburgh, not to mention a full 7½ back of third-place Boston, the paper’s optimism was clearly on the excessive side.

In addition to what the trip might reveal about the team’s prospects for the rest of the season, it was also important to Burleigh Grimes’s quest to win 25 games. After holding out until the very beginning of the 1921 season, the Robins ace signed a contract with a $1,000 bonus if he won 25 games. However, the aftereffects of the long holdout made Grimes’s chances of reaching his goal more than a little limited. Grimes didn’t make his first start until the season was a week old, only to suffer an arm injury that cost him another 10 days on the sidelines. After missing one additional start due to a thumb injury, the spitballer got hot at the end of May, winning eight straight games for a 12-2 record on July 10. After that, however, Grimes encountered some hard times, losing three of his next four starts, and entered the first game of the trip against the Cubs with a 13-5 record.2 The road to 25 wins wasn’t made any easier when Cubs manager Johnny Evers chose future Hall of Famer Grover Cleveland Alexander to start against Grimes.

Brooklyn’s ace pitcher didn’t help his cause by getting off to a bad start in the bottom of the first. Max Flack beat out an infield hit and after Charlie Hollocher hit into a force play, Grimes walked John Kelleher. Apparently having trouble with his control, the Brooklyn ace had a 3-and-2 count on another Grimes—Ray Grimes, the Cubs catcher. When batter Grimes took the decisive pitch, more than a little controversy erupted. According to Oscar Reichow of the Chicago Daily News, umpire Bill Brennan called ball four, but changed his mind and his decision after “the Brooklyn players objected vigorously.”3 Perhaps understandably, the Standard Union made no mention of the alleged walk, but acknowledged that Cubs manager Evers protested equally vigorously that Brennan had called ball four, begging “the gods to witness his protest.” Supposedly the entire Cubs team joined Evers in protesting the call, or non-call, “but the weight of numbers had little effect on his umps.”4 It’s no wonder Evers objected. The called strike had a double benefit to Grimes and Brooklyn since Hollocher, the runner on second, was thrown out trying to steal third, ending the inning and the Cubs’ threat.

After Alexander set the Robins down in order in the top of the second, the Cubs again threatened in their half of the inning. With one out, George Maisel’s line drive hit pitcher Grimes “in the solar plexus and bounded away for a base hit.”5 Perhaps stunned by the body blow, the Robins ace made the situation worse by throwing the ball away, allowing Maisel to go to second. At this point, however, Grimes bore down, striking out the next two batters, to again escape without any damage. Brooklyn continued to have no success scoring against Alexander, although hits by Tom Griffith and Hi Myers put two on with two out in their fourth. Ray Schmandt grounded out harmlessly to second to end the threat. The game was still scoreless through five innings, reminding the Standard Union “of old times—before the advent of the alleged lively ball.”6

Things began to change in the Brooklyn sixth. After Olson struck out, Jimmy Johnston singled to center and scored on Griffith’s double to right-center. It was the Brooklyn right fielder’s third hit of the day off Alexander and he was not done yet. After Bernie Neis made the second out, Hi Myers chipped in with an infield single that sent Griffith to third. Myers then stole second to put two Robins in scoring position with two out, but Schmandt again failed to deliver and Brooklyn led by only a single run. It remained that way until the top of the eighth, when Johnston again singled. Griffith followed with a ball that “sizzled past first,” his second double and fourth hit of the day, which drove in Johnston.7 Neis hit back to Alexander and, in his only mistake of the game, Griffith got hung up between second and third. Even so the Robins right fielder made the best of a bad situation, avoiding Cubs attempts to tag him until Neis reached second. Griffith’s heads-up baserunning paid off when Myers singled to left, driving in Neis with the Robins’ third and final run of the day. Griffith’s four hits led the Robins attack while Myers and Johnston added three and two respectively. It was a hopeful sign for both players since Johnston had been 6 for his last 29 while Myers had been going so poorly that he had been benched for almost a week. The Brooklyn Daily Times speculated that the benching had “either frightened him or instilled new life.”8

Neither Grimes nor the Robins were home free just yet. Cubs rookie catcher Kettle Wirts led off the bottom of the eighth with his second hit of the game. With the fans “calling lustily for a rally,” Evers sent Babe Twombly up to hit for pitcher Alexander.9 Twombly hit a “slam over second base,” but Brooklyn shortstop Ivy Olson “started the best Brooklyn play of the afternoon,” beginning a double play that ended the threat.10 Had the ball gotten through, the Standard Union feared, there was “no telling what would have happened.”11 Nor was the Brooklyn defense finished making outstanding plays behind their star pitcher. With one out in the ninth, Kelleher hit one to the wall in right-center that neither Myers nor Griffith seemed to have a chance of catching. However, “just as it was going over his head Griffith reached up and pinched it back handed.”12 It was a fitting conclusion to Griffith’s fine afternoon, which Myers celebrated by doing “a war dance for glee.”13 Grimes wasted no time getting the third out (Ray Grimes’s grounder to second) and both the team and the pitcher had gotten the trip off to a good start.

Interestingly, the road trip more than met the Standard Union’s hopes as Brooklyn went 10-5 and returned to New York five games over .500. It did them little good in the long run, however, since instead of moving up in the standings, the Robins eventually dropped out of the first division and finished in fifth place. Naturally, the Brooklyn papers heaped high praise on Burleigh Grimes for winning what the Brooklyn Daily Eagle called “a grueling pitching duel.”14 All told, even with the slow start, the spitballer gave up only five hits without allowing a Cubs runner to reach third. It was, the paper concluded, “some pitching.”15 The game lasted all of 1 hour and 25 minutes, reminding the Brooklyn Daily Times that pitchers of Grimes and Alexanders battling in “an old time pitchers’ duel is a mighty interesting thing.”16 The victory was Grimes’s 14th of the season and he might well have reached his goal of 25, but for four subsequent losses in which the Robins scored only three runs. There was, however, a happy ending, since according to Grimes’s biographer, Charles Ebbets paid his star pitcher a bonus anyway.17 After all, winning 22 games for a fifth-place team while missing almost three weeks of the season was no small accomplishment.

4 “Have Excellent Chance of Going Higher Than Fourth.”

6 “Have Excellent Chance of Going Higher Than Fourth.”

9 “Have Excellent Chance of Going Higher Than Fourth.”

10 “Have Excellent Chance of Going Higher Than Fourth.”

11 “Have Excellent Chance of Going Higher Than Fourth.”

14 “Grimes and Griffith Heroes of Shut-Out Victory Over the Cubs.”

15 “Grimes and Griffith Heroes of Shut-Out Victory Over the Cubs.”