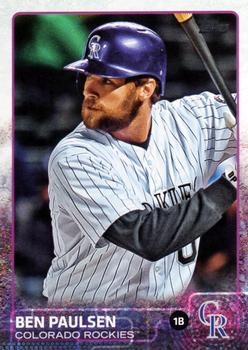 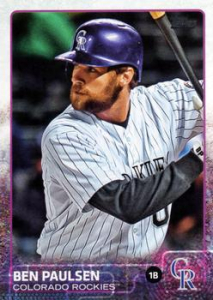 Coors Field, the Denver home of the Colorado Rockies, commonly tops lists of the most hitter-friendly major-league ballparks. The altitude of the majors’ only park significantly above sea level gives fly balls a boost, and the vast outfield forces outfielders to cover extra ground.1 Any game the Rockies host in Denver can quickly turn into an offensive display.

On this Sunday afternoon in July 2015, with baseball’s trading deadline drawing near, the visiting Cincinnati Reds, became the next witness of a classic Denver power show. This time, it was a hopeful candidate for the Rockies’ first base job and a surging slugger leading the way.

The first baseman was Ben Paulsen. After hitting .318 with 31 home runs during three seasons at Clemson University, he was drafted in the third round of the 2009 amateur draft by the Rockies.2 At the time, Todd Helton held the first-base spot, as he had in every season from 1998 to 2013.

By the time Paulsen made his major league debut in 2014, however, Helton had retired and veteran Justin Morneau was occupying first. Morneau’s concussion in May 2015 saw Paulsen get his first chance at regular playing time, and he maintained his spot for the following two months entering this game.3

The slugger was a more familiar name to Rockies fans: outfielder Carlos González. The two-time All-Star topped 20 home runs every year from 2010 through 2013 and led the league with a .336 average in 2010.

But a poor 2014 marred by injuries led into a slow start to 2015.4 On July 4 González was batting .237. At this point, however, he went on a tear, batting .404 in the 13 games before this one. After hitting two home runs in the series opener against the Reds, he was looking for more.

The Reds began the day with a 43-52 record, while the Rockies entered the game at 41-54. Cincinnati manager Bryan Price sent 23-year-old rookie Michael Lorenzen to start against the Rockies, while Colorado manager Walt Weiss chose veteran Kyle Kendrick, who entered the day with a 3-11 record.

Kendrick retired the first three Reds to start the game, but Lorenzen was not as fortunate in the bottom of the first. After Charlie Blackmon flied out, Lorenzen walked DJ LeMahieu and Gonzalez. After a strikeout, Paulsen hit a triple to center field, scoring both runners for a 2-0 lead.

The Reds responded in the top of the second with a two-out rally, as Eugenio Suárez, Tucker Barnhart, and Lorenzen, an outstanding two-way player in college who batted eighth in this game, hit three singles in a row. Lorenzen’s single scored Suárez, cutting Colorado’s lead to 2-1.

After Lorenzen retired the side in the bottom of the second, the Reds surged ahead in the third. Joey Votto and Todd Frazier walked with one out, bringing Jay Bruce to the plate. He connected on a three-run home run to right field for a 4-2 Cincinnati lead.

The game was already shaping up to be a slugfest, and the bottom of the third was when the fireworks truly began. Blackmon led off for the Rockies with a double. After LeMahieu grounded out, González hit a single to left field, scoring Blackmon. This brought Nolan Arenado to the plate with a 4-3 Reds lead. That lead flipped completely with a two-run home run to left field, Arenado’s 25th of the season, giving Colorado a 5-4 lead.

Paulsen came up and followed Arenado’s footsteps, hitting a home to right field for a two-run lead.

The Rockies’ offensive eruption continued. Nick Hundley singled and Daniel Descalso tripled, scoring Hundley and ending Lorenzen’s day. Reliever Dylan Axelrod threw four straight balls to left fielder Brandon Barnes. Kendrick then attempted a safety squeeze to bring Descalso home. The Reds failed to get him out, allowing Descalso to score and Kendrick to reach first, and making the score 8-4, Rockies. Blackmon, coming to bat again, grounded out, but LeMahieu drove in Barnes and Kendrick with a double.

González continued his power stroke against the Reds, hitting a two-run homer for the Rockies’ third homer of the inning. The inning finally ended when Arenado grounded out. It was the Rockies’ first inning scoring 10 or more runs since April 27, 2012.5

An inning later, with Axelrod still on the mound, Paulsen led off with another home run, his second of the game and seventh of the year, extending the Rockies lead to 13-4.

But no lead was safe at Coors Field, and the Reds chipped into the lead in the fifth. Votto led off with a walk and scored on Bruce’s one-out double. Two batters later, Suárez single’s drove in Bruce, and the Reds trailed 13-6.

The Rockies answered in the bottom of the fifth. Blackmon led off with a walk and LeMahieu singled. That put two runners on for González, who followed Paulsen’s lead, hitting his second home run of the game (his 18th of the season) to put the game away at 16-6.

Both bullpens settled everything down for the rest of the game. Nathan Adcock closed out the Rockies in the fifth, then allowed a run in the sixth on Drew Stubbs’ pinch-hit triple—Colorado’s 10th extra-base hit of the day—and Blackmon’s sacrifice fly. Reds relievers Burke Badenhop and Ryan Mattheus followed with scoreless innings.

The Rockies’ two hottest bats of the afternoon had final chances to cap off their big days. González grounded out against Adcock in the sixth, and Weiss removed him in the eighth, ending González’s bid for the third three-homer game of his career.

Paulsen had a single off Adcock in the fifth for his fourth hit. With a chance for a third home run—or, with a double, a cycle—he fanned against Badenhop in the seventh.

Weiss turned the game over to the Rockies’ relief corps in the sixth. González Germen, Christian Friedrich, and Rafael Betancourt contributed scoreless innings, as Colorado took its commanding lead into the ninth.

Boone Logan came in with an 11-run lead to close out the Reds. He allowed a run on two singles, a walk, and Jason Bourgeois’ RBI-groundout, but wrapped up the Rockies’ 17-7 win.

Paulsen ended with a career-high four hits,6 finishing a double shy of the cycle. González tied his career best with six RBIs.7 Kendrick picked up the win, his first in over a month, despite allowing six earned runs.8 The Reds’ Lorenzen and Axelrod each allowed eight earned runs, with Lorenzen taking the loss.

Both teams ended the season on similar paths. Colorado finished 68-94, last in the NL West. Two days after this win, longtime shortstop Troy Tulowitzki was traded to Toronto.9 The Reds fared even worse; they went from 43-53 to a 64-98 record by the end of 2015, last in the NL Central. They also said goodbye to a key piece before this blowout: Their pitching ace, Johnny Cueto, was traded to the Kansas City Royals.10

González continued his hot streak with two more home runs a day later in a loss to the Chicago Cubs. In 78 games from July 5 to the end of the season, he hit 30 home runs. He ended the season with 40 homers, third-most in the NL behind his teammate Arenado and NL MVP Bryce Harper, who hit 42. González stayed in Colorado until 2019, making one more All-Star team in 2016. After 45 games split between Cleveland and the Chicago Cubs, González retired after 2019.

As for Paulsen, he remained at first until Morneau returned in September. After that, he bounced between first base, left field, and the bench for the rest of 2015 and the start of 2016. He ended April 2016 hitting .326 splitting time at first with Mark Reynolds, but was demoted to Triple-A two weeks later after falling to a .258 average. An injury to Reynolds in August saw Paulsen return, but after batting .115 over 10 games, he returned to Triple-A, and his time in the major leagues came to an end.11

I met Ben Paulsen in January 2022, when he was Director of Player Development for Clemson Baseball. I had just begun working as a student intern with the team, and he acted as the guide between the data analytics team I was a part of and the coaching staff. He had returned to Clemson to complete his degree in 2018, then went into player development. His knowledge and dedication to the Tigers helped me adjust to the college world, and I will always be thankful for his belief in me as an intern.

In addition to the Sources cited in the Notes, the author consulted the Baseball-Reference.com and Retrosheet.org websites for information on the careers of Carlos Gonzalez and Ben Paulsen, along with other pertinent material and the box scores noted below.

1 Coors Field as of the 2022 season was the most hitter-friendly major-league ballpark according to Scoutingbook’s Park Factors metric, which is based on home runs and runs scored at each park.

6 Paulsen retired in 2016; this four-hit game remained his career high.