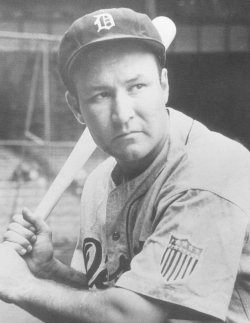 On July 27, 1946, the hard-hitting Boston Red Sox visited Sportsman’s Park III for a Saturday-evening game against the St. Louis Browns. The New York Times led its game recap with this: “Rudy York’s two home runs with the bases filled, equaling the major league record, featured an old-fashioned slugging bee tonight as the Red Sox mauled the Browns, 13 to 6.”1 The Boston Sunday Globe made this the front page’s lead story, telling readers, “Affectionately known as Flattop to his teammates, Big Rudy must have resembled a United States Navy airplane carrier to tall Tex Shirley. The lanky St. Louis right-handed pitcher was the victim of both of Rudy’s jackpot jolts, which came in the second and fifth innings to place the name of the once supposedly washed-up ex-Tiger alongside those of Tony Lazzeri and Jim Tabor in the national pastime’s archives.”2

In the game, Boston struck immediately, in the top of the first inning. After Johnny Pesky doubled with one out and Ted Williams was intentionally walked, Browns pitcher Bob Muncrief gave up a double to York, a liner into the right-field corner. That two-bagger brought in two runs. Bobby Doerr plated York with a triple to the right-center-field alley. When Browns second baseman Johnny Berardino relayed the outfield throw to third baseman Mark Christman, his throw hit the bag, allowing Doerr to scamper home with the fourth run of the inning.

In the second inning York came up with the bases loaded. Hal Wagner, Wally Moses, and Pesky had all singled, and St. Louis manager Luke Sewell made the move to the bullpen, sending Muncrief to the showers in favor of Tex Shirley. Muncrief had faced 11 batters and retired only four, allowing seven runs (six earned) on six hits and a walk. Shirley walked Williams bringing in another run, and York strode to the plate. Rudy promptly sent a Shirley offering into the left-field seats for a grand slam. Boston was ahead 9-0 after only an inning and a third.

St. Louis got on the scoreboard in the bottom of the fourth inning. “A single by [Vern] Stephens preceding successive fourmasters onto the right-field roof by Jeff Heath and Al Zarilla”3 accounted for three quick runs. In the top of the fifth, Moses singled again and went to third on Pesky’s second double of the game. The third walk of the game to Williams (his second intentional walk) set the stage for York, who did not disappoint. His blast was a “monumental affair, crashing against the bottom of a light tower half way up the left-field bleacher seats.”4 That was all the scoring Boston would muster, but it was surely enough, with the Red Sox enjoying 13 runs through five innings. St. Louis’s Walt Judnich hit his 12th home run of the season in the bottom of the sixth, with Heath and Zarilla aboard, and that’s where the score would end: Boston 13, St. Louis 6. Red Sox starter Charlie Wagner left the game in the bottom of the seventh, and reliever Earl Johnson finished the game. Boston’s 15 hits and St. Louis’s 8 hits accounted for 45 bases in the game.

York had a total of 10 runs batted in, two shy of the major-league record. The Boston slugger was struck out by Stan Ferens with Ted Williams on in the seventh, and Ellis Kinder forced him to ground into a double play with Pesky and Williams on the sacks in the ninth inning. Rudy had also drawn a walk in the game. While not a major-league record, York’s power display did put him in Boston’s record books, for the most RBIs in a game by a Red Sox player. York’s pair of grand slams brought the team’s total for the season to five. (Shirley had served up three of them.) York would finish his career with 12 bases-loaded round-trippers,5 making him extremely dangerous with the sacks filled.

Red Sox manager Joe Cronin had moved York to the cleanup spot for the Red Sox-Browns series. Rudy responded with three hits in five at-bats in each of the first two games, with a total of 14 runs batted in. He also scored four times.

Johnny Pesky also had a great day with the lumber, smacking two doubles and a single in a 3-for-5 display, “to continue his better than .450 (.466) clip through the last 11 games.”6 He had amassed 127 hits to this point in the season, giving him the league lead. Ted Williams had two hits (a single and a double), and drew four walks, giving him a perfect 6-for-6 on-base day.

The author thanks Lisa Tuite of the Boston Globe’s news library for her assistance with obtaining sources.