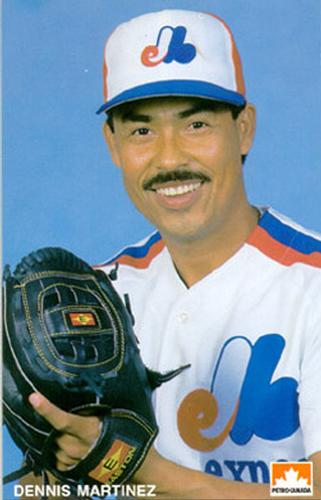 That was broadcaster Dave Van Horne’s call on July 28, 1991, at Dodger Stadium, after Dennis Martínez completed the only perfect game in Montreal Expos history.

Other Montreal pitchers had thrown no-hitters — Bill Stoneman in 1969 and 1972, and Charlie Lea in 1981. Also, just two days before Martínez’s gem, Mark Gardner went nine no-hit innings against Los Angeles — but Montreal could not score. Gardner then lost his no-no and the game in the 10th inning.1 But Martínez became just the 13th man to throw a perfect game in major-league history.

Martinez’s masterpiece symbolized his personal redemption. The pitcher, whose father was an alcoholic, became one too. It nearly derailed his career. As early as 1976, in Triple A, there were warning signs.2 In 1983 his alcohol problem came to a head, and he got help. “It was a bad year,” he later said, “but I got a new start.”3

Though it took more than three years for Martínez to re-emerge fully, he became a master craftsman on the mound. The Expos acquired him from Baltimore in June 1986, and from June 1987 through 1993, Martinez was consistently among the best pitchers in the National League.

In 1988 he had said, “Before, when I was drinking, I used to think I was good. I didn’t think about pitching. … I used to just try to throw the ball past the hitter. Now I think. I don’t say it makes it easy, but it makes it easier.”4

That thinking process made him a very crafty pitcher. He moved the ball around, changed speeds, focused on the weaknesses of the hitters, and made constant adjustments, setting up batters based on their reactions from pitch to pitch. He also hid the ball well with his motion and threw from varied arm angles. In some respects, Martinez had his finest season in 1991. He led the NL in ERA at 2.39 — never rising above 2.42 — and finished fifth in the Cy Young Award voting.

“He’s been this way all year,” catcher Ron Hassey remarked after the perfect game. “There’s been only one or two games when he hasn’t had the kind of stuff he had today.”5

However, as El Presidente took the hill at Dodger Stadium on July 28, he hadn’t won since a complete-game 4-3 victory at Pittsburgh on July 5. In three starts after that, he had two no-decisions, sandwiched around one of his few shaky outings in ’91, a loss to San Diego at home.

It was a typical summer Sunday afternoon in Los Angeles: 95 degrees and hazy. A big crowd of 45,560 was at the game. Martinez had attended Mass that morning, as he did each Sunday. “To me, that was the key point to the day,” he later said.6

Never overpowering, Martinez fooled the Dodgers “with curveballs and sinkers and guts.”7 As Expos historian Jonah Keri wrote, “Though there weren’t advanced pitch-tracking systems back then … you’d swear he threw 50 of his trademark knee-buckling curveballs.”8 Ken Singleton, the color commentator who teamed with Dave Van Horne on the TSN (Canada’s only sports network at the time) telecast, said, “It’s not your run-of-the-mill curveball that’s coming up there today.”9

Two of those benders came at critical junctures. As Bill Plaschke of the Los Angeles Times put it, “Hassey and Martinez combined on two big, bold pitches that may have saved the perfect game. With two out in the seventh inning and a full count on Eddie Murray, Martinez dared to throw a curveball. Murray jumped at it, grounding it to second base. With one out in the eighth inning and a full count on Kal Daniels, Martinez threw another curveball. Daniels swung through it for a strikeout.”10

The Dodgers came close to a hit several times. With one out in the fourth, Montreal third baseman Tim Wallach handled Juan Samuel’s smash on the lip of the infield grass. With one out in the fifth, Daniels grounded to second base. Delino DeShields backed onto the outfield grass, waiting for a big hop. Daniels — once a fast runner, but slowed by several knee operations — got out of the box slowly but was still out by just half a step.

El Presidente also helped himself with one out in the seventh. The speedy Samuel pushed a bunt up the first-base line, but Martinez raced over, barehanded the ball, and threw out Samuel while falling forward. In the fourth inning, he had fought off a sore hip, caused by landing in a hole on the slippery mound dug by opposing pitcher Mike Morgan.

There was a play that almost led to an error. With one out in the sixth, DeShields fielded Alfredo Griffin’s grounder, but his low throw to first nearly pulled Larry Walker off the bag.

Morgan also had a perfect game through five innings until Hassey led off the sixth with a single. The Expos’ two runs — both unearned — came in the top of the seventh inning. Griffin, the Dodgers’ shortstop, committed an error, and after a sacrifice bunt and a groundout, Walker got Montreal’s big hit, a triple. Walker scored when Griffin made his second error of the inning on a Hassey groundball. Morgan went on to throw a complete game himself, allowing just four hits while walking one.

The last man between Martinez and perfection was pinch-hitter Chris Gwynn, younger brother of Tony. The lefty swinger almost ended the dream when he slapped a 1-and-1 pitch barely foul down the third-base line. Expos center fielder Marquis Grissom said, “I don’t think anybody wanted the ball hit to them. I was so overexcited out there. I was just thinking, ‘Please, no line drives, nothing hard.’ I don’t want to be the one to ruin history.”11

Martinez left the 1-and-2 pitch up, and Gwynn lifted it to right-center. “I hit it well,” said Gwynn, “but I knew it wasn’t enough to get out.”12 Grissom said, “It was a routine fly ball. But I had to get over there and get it. I had to forget what was at stake.”13

After Grissom gloved the ball, celebration ensued, led by Wallach. When the swarm abated, Martinez then enjoyed an interlude alone in the dugout. “There was nothing in my mind,” he said. “I had no words to say, I could only cry. I didn’t know how to express myself. I didn’t know how to respond to this kind of game.”14

Martinez’s command was exceptional. He needed just 96 pitches, 66 of which were strikes. He went to a two-ball count on only eight hitters, and of these, only three went to a three-ball count. There were 17 groundouts, five strikeouts, two foul outs, and just three fair balls hit out of the infield.15

Hassey, who also caught Len Barker’s perfect game of May 15, 1981, became the first major-league catcher to handle two of them. “This was a lot different than Lenny’s,” Hassey said. “Lenny was … a wild pitcher. Dennis is a pitcher’s pitcher.”16

The catcher added, “We had a game plan, and we went out and did it. You give the credit to Dennis. He’s the guy who had to throw the pitches. I’m just the guy who’s catching them and helping him.”17 Other Expos said, however, that Hassey was being too modest.18

Jonah Keri wrote, “In the clubhouse afterwards, Walker showered Martinez with beer, and the conquering hero carefully wiped it off his face. Later that night, teammates and friends toasted him with champagne; Martinez raised his glass, then set it down without taking a sip.”19 After the game, the sober man offered hope to others with drinking problems, saying, “It’s never too late to do something about it.”20

Martinez, the first player from Nicaragua to reach the majors, was already a hero in his homeland. He got the nickname El Presidente in 1979 from Ken Singleton, then a teammate with the Orioles. Tito Rondón, who in 1991 was sports editor of the Nicaraguan newspaper La Prensa, said, “Dennis Martínez was already the most popular man in the country before he pitched a perfect game. Now he’s just more popular.” 21

“I thank God for this game that He gave me late in my career,” said Martinez.22 As it turned out, the veteran remained active through the 1998 season, when he turned 44. He threw eight more shutouts, including two of his six career two-hitters (he also had a one-hitter in 1985). He amassed 245 regular-season victories in the majors, still the record for Latin American hurlers as of early 2017, but win number 174 was his finest hour.

This article appeared in “Au jeu/Play Ball: The 50 Greatest Games in the History of the Montreal Expos” (SABR, 2016), edited by Norm King. It also appeared in SABR’s “No-Hitters” (2017), edited by Bill Nowlin.

1 Also worthy of mention are two rain-shortened performances. On April 21, 1984, David Palmer retired the first 15 St. Louis Cardinals he faced, but the game was called. On September 24, 1988, Pascual Pérez pitched five hitless innings against the Philadelphia Phillies, but that game was called in the top of the sixth. In September 1991 the Committee for Statistical Accuracy issued a retroactive ruling that these, among 50 games that had been listed as no-hitters, no longer qualified as such. The irony is that the committee made this decision after being asked to rule whether Mark Gardner’s achievement deserved to be called a no-hitter.

9 TSN broadcast of the perfect game, accessed via YouTube.com.

11 Plaschke, “Perfection Brings Expos’ Martinez to Tears.” (This is an alternate version of “Martinez Perfect Against L.A.”)