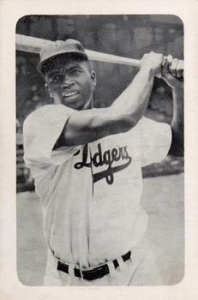 The fireworks arrived a few days before the Fourth of July. On Wednesday, July 2, 1947, the Brooklyn Dodgers blasted the New York Giants, 11-3, in the first of a four-game series at Ebbets Field to gain sole possession of first place in the National League. The next day, the Giants exploded with five home runs, as they “reversed their one-sided defeat of the night before, but added some terrific new business that left a ladies’ day crowd of 27,938 practically in a state of coma,”1 in a 19-2 shellacking of the home team. The only highlight of the day for the home team was a 2-for-4 performance at the plate by Jackie Robinson, which extended the Brooklyn rookie’s hitting streak to 20 games.

Brooklyn had made a fast start to the season, winning eight of its first 10 games. The Dodgers ran into a rough stretch in May (12-14) but then won 18 of 29 in June, gaining a share of the league lead as the month expired. The Giants, meanwhile, lost seven of nine to begin its 1947 campaign. After a hot May (17-7), they split 26 games in June. Coming into this series, the Dodgers were tied with the Boston Braves atop the league, with the Giants only a half-game back. These next four games would decide who would lead the pennant race during the last three months of the season.

New York manager Mel Ott chose Dave Koslo to get the start against the Dodgers. Winner of his last two decisions, Koslo was facing the Dodgers for the fifth time, and the Giants had won two of his previous four starts against the Flock. Brooklyn’s Burt Shotton countered with Hal Gregg, who had been used as both a starter and reliever the first three months of the season. Earlier in the week (June 29), Gregg had started against Koslo and the Giants at the Polo Grounds, going 7⅔ innings but getting tagged for seven runs. (Koslo did not get the decision.)

With one out in the opening inning, Buddy Kerr singled to left. Bobby Thomson followed with a homer to give the Giants a 2-0 lead they would not relinquish. An explosion of runs took place in the second inning. Twelve New York runners came to the plate and nine of them scored, “tying a league season high for one frame which had been set the night before by the Brooks.”2 Sid Gordon started it with a single to right. After Jack Lohrke walked, Koslo reached on an error by first baseman Robinson, loading the bases. Buddy Blattner rolled a grounder to short, and Koslo was forced at second base as Gordon scored. Kerr then grounded to third, but Brooklyn’s Spider Jorgensen couldn’t get an out and everyone was safe on the fielder’s choice. (Lohrke scored). Thomson worked a full count and drew a walk, again loading the bases. Shotton made a pitching change, bringing in right-hander Hank Behrman to relieve Gregg. Behrman had started the season with the Dodgers, been traded to Pittsburgh on May 3, and then “returned to Brooklyn”3 on June 14. Unfortunately for the Dodgers, he must have left his control in the bullpen; he walked Johnny Mize and Willard Marshall, with each getting a bases-loaded RBI. Walker Cooper sent Behrman’s 1-and-2 offering 400 feet into the left-center-field lower stands “on a screeching line”4 for a grand slam. Four pitches later, Gordon “whacked his No. 4 against the upper left field stands,”5 ending Behrman’s day on the mound. Joe Hatten became the third Brooklyn hurler of the inning, and he retired Lohrke and Koslo to end the inning.

In the third, the Giants sent only 11 batters to the plate. Blattner opened the frame with a single and scored on Thomson’s one-out homer. Hatten retired Mize, but then Marshall walked and scored on Cooper’s double to right. Gordon singled up the middle, plating Cooper. Then Hatten’s control disappeared. With Lohrke batting, Hatten uncorked a wild pitch, allowing Gordon to advance. Then Gordon took third on a passed ball. Lohrke drew a four-pitch walk, bringing up Koslo. New York’s pitcher helped his own cause with an RBI single to left. Hatten threw another wild pitch, allowing both Lohrke and Koslo to move up a base. Blattner then doubled to left, and two more runners scored, making the score 18-0.

Clyde King came in to pitch in the top of the fourth. With one down, Mize clouted his 22nd home run, a solo shot onto Bedford Avenue. According to the Daily News, “the pressbox boys started rushing out for the record books.”6 At the end of 3½ innings, the Giants had “carved out an incredible 19-0 bulge.”7 King then settled down, pitching the remainder of the game for Brooklyn and allowing only two more hits, both singles.

Brooklyn managed a little bit of offense in the bottom of the fourth. Carl Furillo reached on a throwing error by Giants shortstop Kerr. After Al Gionfriddo flied out, Pee Wee Reese doubled to left field. King singled, driving in Furillo to end the shutout.

In the fifth, Eddie Stanky singled up the middle. Robinson laid down a bunt and beat it out for a single. Eddie Miksis walked, loading the bases. Furillo sent a fly ball to left, bringing home Stanky, but Gionfriddo followed with a line drive double play, ending the Dodgers rally.

The score remained 19-2. In the bottom of the ninth with one out, Duke Snider reached on a bobble by second baseman Blattner. Robinson smashed a double to right, but Snider held up at third. Koslo then retired Miksis and Furillo to end the game.

Every starter, including Koslo, drove in at least one run for the Giants. Koslo went the distance for New York, picking up his eighth win. He scattered 10 hits, but “they were widely separated,”8 as Brooklyn couldn’t get more than two safeties in any one inning. According to the Daily News, what the Giants did “to Hal Gregg, Hank Behrman and Joe Hatten before that would make even Bela Lugosi turn his eyes away in horror.”9

With the win, the Giants moved into second place, a half-game behind the Dodgers. The Braves, losers of three straight, fell into third place. The Giants-Dodgers series concluded with a Fourth of July doubleheader, in which Brooklyn swept the New Yorkers, 16-7 and 4-3. Robinson’s infield single in the sixth inning of the first contest extended his streak to 21 games, but he was hitless in four trips in the second game. He had built confidence, though, and for the rest of the season he stayed consistent. Only once did he go more than two consecutive games without getting a hit. He had come six games short of tying the National League rookie hit-streak record of 27 games, set by Jimmy Williams of the 1899 Pittsburgh Pirates.10 Williams had a great rookie season, batting .354 and leading the league with 27 triples. The American League record of 26 games was set by Chicago White Sox rookie Guy Curtright in 1943.11 San Diego’s Benito Santiago set the current major-league rookie record of 34 games in 1987. Robinson finished 1947 with a .297 average in 151 games and won the inaugural Rookie of the Year Award.

In the span of four games, 65 runs were scored at Ebbets Field between the Giants (32) and the Dodgers (33). What mattered was that the home team had won three of the four contests. Further, some bragging rights came with the series victory. Including this July 3 game, it was the sixth time in the past eight seasons that the Dodgers had been in the top spot in the National League standings on the Fourth of July. But they had only one pennant to show for it.12

Robinson’s hitting streak was proof that he belonged in the big leagues. Interestingly, on this day, the Cleveland Indians announced the signing of infielder Larry Doby, who had been playing for the Newark Eagles of the Negro National League and now became the first black player in the American League. According to the New York Times, with “Robinson proving a success, both as a Brooklyn first baseman and as a gate attraction, President Bill Veeck of the Indians indicated that a wide-open scramble for Negro players was now underway.”13 Veeck said, “I don’t think any man who has the ability should be barred from the majors on account of his color.”14

The author wishes to thank SABR members Bill Nowlin and Lyle Spatz, as well as Cassidy Lent of the Giamatti Research Center at the National Baseball Hall of Fame and Museum, for their assistance in finding rookie hitting streak records. In addition to the sources mentioned in the Notes, the author consulted baseball-reference.com, mlb.com, retrosheet.org, and sabr.org, to include:

12 Brooklyn did win the National League pennant in 1947, giving the Dodgers two first-place finishes in six seasons. As in 1941, they lost the World Series to the New York Yankees.