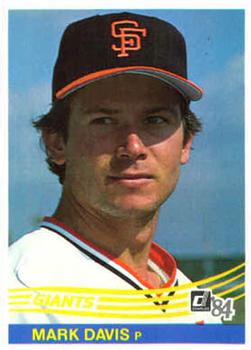 Mark Davis brazenly introduced himself to the San Francisco Giants-Los Angeles Dodgers rivalry. On July 30, 1983, the Giants’ 22-year-old left-hander authored a crafty 8-0 shutout in his debut against the Dodgers before 38,771 fans at Candlestick Park.

Making his eighth start since being recalled from the Giants’ Triple-A Phoenix farm club in June, Davis earned his first win with the Giants and second as a major leaguer while recording his first career complete game. The blanking was the first by a San Francisco pitcher against Los Angeles since Ed Halicki in 1976.1

Davis scattered seven hits (five singles and two doubles) while walking three and striking out four in the Saturday-afternoon affair. The Dodgers were 0-for-6 with runners in scoring position and left eight men on base.

Davis’s lone perfect inning was the sixth, when he retired Ken Landreaux on a groundout to first base and Dusty Baker and Pedro Guerrero on fly outs to left field and center field, respectively. Davis coaxed two double plays, both off the bat of Steve Yeager, in the second and fourth. The Dodgers’ best scoring opportunity came in the third when Derrel Thomas led off with a double — which Jeff Leonard nearly snagged against the left-field wall — and advanced to third with two outs, but he was stranded there as Landreaux grounded out to second.

“The defense got me the shutout,” said Davis, who sported a Croix de Candlestick pin on his cap.2 “I just threw the ball. Everything was working my way. When I needed to make a good pitch, it was there. When I needed a good play, it was made. They hit the ball, but right at people.”3

The Giants provided Davis plenty of offensive support. They jumped on Los Angeles starter Jerry Reuss with three runs in the first. Johnnie LeMaster struck out leading off but reached first on a wild pitch. On a sacrifice bunt, Tom O’Malley reached on a throwing error by second baseman Steve Sax that advanced LeMaster to second.4 After Chili Davis fouled out, Leonard singled to right to score LeMaster with his team-leading 54th RBI, and Joel Youngblood followed with a two-run double to right that plated O’Malley and Leonard.

In the third, Chili Davis bunted for a single, Leonard reached on an infield hit, Youngblood stroked an RBI single to left, and Bob Brenly blasted a three-run homer on an 0-and-2 pitch to deep left-center — his sixth of the season — to make it 7-0 and knock out Reuss.

“He mixed up his pitches, he kept the hitters off balance and, most important, he made the pitches when he had to,” Giants manager Frank Robinson said. “It’s a little easier when we score some runs, and we hadn’t done that for him before.”5 San Francisco had mustered only nine runs while Davis was on the mound over his first seven starts.

The Giants banged out 14 hits, including two singles by Davis — his first two hits of the season.6 His second hit came leading off the eighth against Dave Stewart and he scored on a two-out RBI single to center by Chili Davis, who finished with three hits.

Although he allowed three singles and a walk over the final three innings, Davis said he “felt better from the seventh inning on. That’s when the adrenaline took over. This kind of game pumps you up.”7

Davis was merely a postscript when the Giants acquired him in a much-ballyhooed trade with the Philadelphia Phillies on December 14, 1982. San Francisco shipped future Hall of Fame second baseman Joe Morgan and pitcher Al Holland to Philadelphia for pitcher Mike Krukow, minor-league outfielder C.L. Penigar, and Davis, whose development had been curtailed by shoulder problems.

“He’s just a bonus,” Robinson said of Davis, who was selected by the Phillies with the first pick of the January 1979 amateur draft and appeared in two major-league games in 1980 and nine in 1981. “We knew he had outstanding ability, but he’d had a sore arm for the last 2½ years. If he came around, it would be a big plus. If not, it was no big loss. It was worth the gamble. But when I saw him pitch in spring training, I didn’t think he’d pitch at all.”8

But after going 6-3 — despite a 6.32 ERA and 89 hits allowed in 72⅔ innings — in 13 starts with Phoenix, Davis was promoted to the Giants on June 21. The native of Livermore, California, just over 40 miles east of San Francisco, worked at least five innings in six of his first seven starts but was winless at 0-3 before his unveiling against the Dodgers. The 2-hour 31-minute matinee dropped Davis’s ERA from 5.25 to 4.20, including a snappy 1.69 mark over his last three starts.9

Giants catcher Johnny Rabb, who teamed with Davis in the minors and was recalled the same day, said his batterymate “threw like he did in Phoenix.” Rabb added, “When he fell behind, it was because he was overthrowing his fastball, which he doesn’t have to do — he has a good fastball. Then he got the breaking ball over when he fell behind. He’s kind of hyper. Sometimes you have to slow him down or he’ll get the ball upstairs a lot.”10

What did Davis do for an encore?

En route to finishing the season with a 6-4 record and a 3.49 ERA, Davis shut out the Dodgers again on September 16 at Candlestick, surrendering just two singles in a 1-0 victory over Fernando Valenzuela, and limited them to one run on four hits in 8⅓ innings on October 1 at Dodger Stadium, losing the shutout in the ninth and winning 4-1.11 In 20 starts amassing 111 innings, Davis allowed only 93 hits as opponents batted but .227 against him.

“The thing I’m happiest about is that the Giants won’t have to worry this winter whether I can pitch,” Davis said. “Last year at this time, I couldn’t pick up a ball and throw it 10 feet. I don’t know if the Phillies gave up on me, but they did trade me. It was just a matter of rehabilitating the shoulder.”12

The Giants, coming off a strong finish to the 1982 season, were expected to challenge for the National League West Division title in 1983. But they were saddled in fourth place with a 50-52 record after Davis’s initial whitewash, trailing the Atlanta Braves by 13 games. San Francisco wound up fifth at 79-83, 12 games out. Meanwhile, second-place Los Angeles was 56-44, six games behind the Braves, but came back to win the division with a 91-71 record before losing to the Phillies in the NLCS three games to one.

Peculiarly, the Giants were 13-5 against the Dodgers (the first time they won the season series since 1976) and 7-5 against the Phillies but 59-73 against the rest of the NL.

Davis was the Giants’ Opening Day starter in 1984 but struggled to a 5-17 record while pitching as both a starter and reliever. He spent much of 1985 and 1986 in the bullpen before being traded to the San Diego Padres on July 5, 1987.13 Davis worked exclusively in relief for the Padres, leading the majors with 44 saves in 1989, winning the Cy Young Award, and placing sixth in Most Valuable Player balloting. Davis subsequently played for the Kansas City Royals (1990-92), Atlanta (1992), and Philadelphia (1993), then returned to San Diego (1993-94) before wrapping up his 15-year big-league career with the Milwaukee Brewers (1997). He never pitched another shutout.14

2 In 1983 the Giants gave out Croix de Candlestick pins with the motto “Veni, Vidi, Vixi” (“I came, I saw, I survived”) to fans who attended extra-inning night games at Candlestick Park — a symbol of the team’s “Hang in There” theme. There were five such games that season.

4 The Dodgers came into the game leading the National League with 119 errors.

9 After losing his first five starts, the Giants won Davis’s two starts prior to the game against the Dodgers — July 19 at Chicago and July 24 at Pittsburgh (game two of a doubleheader). Davis allowed four earned runs over 12⅓ innings in those two games but was not involved in the decision in either of them.

11 The Dodgers’ two singles in the September 16 game came in the second and fifth innings. In the October 1 game, Davis allowed a leadoff double to Cecil Espy and did not give up another hit until there was one out in the ninth. For his career, Davis was 6-6 with a 2.63 ERA against Los Angeles.