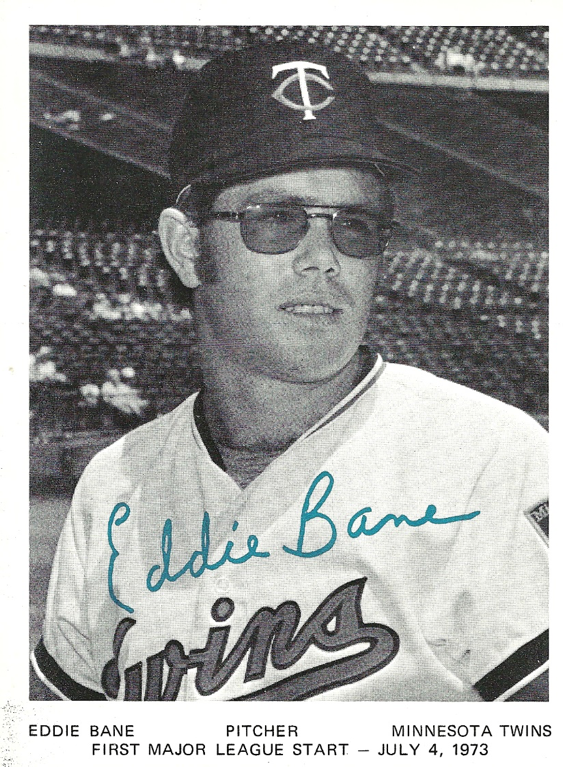 In 1972 the Minnesota Twins’ attendance hit a low of 797,901. In late June of 1973, the Twins were on pace to draw less than that of 1972. On June 27 the Twins played the Texas Rangers in Arlington before a crowd of 35,698, far above the average Rangers crowd of 8,470. The stimulus for the large crowd was the major-league debut of David Clyde, a left-handed pitcher who was the first pick in the 1973 draft on June 5 and came directly to the majors for his debut.

Twins owner Calvin Griffith took notice and the following day it was announced that Eddie Bane would be the Twins starter for the July 4 game at Metropolitan Stadium against Kansas City. Bane, like Clyde a left-handed pitcher, was the Twins’ first-round pick in the 1973 draft. He was a college All-America at Arizona State, had a collegiate record of 40-4 and was 1973 college player of the year. His ASU team lost the 1973 College World Series championship game to USC.1 Three days after that game, he signed a $55,000 contract with the Twins. Like Clyde, Bane would come directly to the major leagues to make his July 4 debut.

The Twins were hoping to attract a crowd of 30,000, far above their 1973 average attendance. As added inducements, they also announced they would pass out 30,000 photos of Bane to fans attending the game and would have a fireworks display after the game.

The game was successful beyond the Twins’ expectations. A crowd of 45,890 flocked to Metropolitan Stadium on a beautiful July 4 evening. The late-arriving crowd was not expected by Twins officials,2 so fans had difficulty getting parked and into their seats by game time. The Twins decided to delay the start of the game by 15 minutes. “I was well into my warmup when they said the game would be delayed,” Bane said. “I didn’t care but Kitty (Jim Kaat) went crazy. He was yelling, “You can’t do this to the kid. He’s already loose, sweated up.”3

The start of the game was pushed back but it didn’t bother Bane. He allowed only one run in seven innings. The first batter he faced, Freddie Patek, flied out to center field. Cookie Rojas then walked but was forced at second on a grounder to short by Amos Otis. Otis was then thrown out when he attempted to steal second.4 Bane went three up three down in the second inning, including his first major-league strikeout — Lou Piniella.

Bane allowed his only run in the third on a single by Hal McRae and a double by Fran Healy. He allowed a single in the fourth inning by Kurt Bevacqua, who was then erased in a double play. Bane retired the side in order in the fifth and sixth innings.

In the seventh inning, Piniella reached on an error by third baseman Steve Braun and was sacrificed to second. Paul Schaal walked. Bane got out of the jam by striking out McRae and getting Jim Wohlford on a liner to left.

Meanwhile the Twins were held scoreless by Royals starter Dick Drago for the first seven innings. Although the Twins accumulated eight hits and two walks off Drago, they were unable to push across a run.

In the bottom of the eighth the Twins erupted for three runs off Drago on a double by Braun followed by Larry Hisle’s single scoring Braun and a home run by first baseman Joe Lis to take a 3-1 lead. However, in the top of the ninth, Kansas City mounted a comeback off Corbin. After striking out Piniella, Corbin allowed a single to Bevacqua, then walked Schaal and pinch-hitter John Mayberry to load the bases. Pinch-hitter Gail Hopkins hit a foul pop to third on which Bevacqua was able to score, but then walked pinch-hitter Ed Kirkpatrick to load the bases and then walked Patek to tie the score.5 Bill Hands relieved Corbin and surrendered a two-run single to Rojas that gave the Royals the lead. Steve Hovley flied out to left to end the inning.

The Twins led off the bottom of the ninth with singles by Rod Carew and Jerry Terrell. Gene Garber relieved Drago and gave up a fly ball to designated hitter Tony Oliva on which Carew scored. With the Royals leading 5-4, Garber struck out Bobby Darwin, allowed a single to Braun, and got Larry Hisle to fly to center to end the game.

Drago got the win and Corbin took the loss. The game was played in 2 hours and 58 minutes.

After spending 1977 with Tacoma, Bane was released by the Twins. Although he attempted comebacks with the White Sox and Royals, he never pitched in the major leagues again.

In 1984 Bane accepted an offer to scout for the Cleveland Indians. He turned that job into a career, working for the Dodgers, Rays, Angels, Tigers, and Red Sox. He was scouting director for the Angels from 2004 to 2010 and was the man responsible for making Mike Trout the 25th selection in the 2009 draft.

The July 4, 1973, crowd established the regular-season attendance record for the Twins in Metropolitan stadium.6 “They announced 45,000 but the crowd had to be 250,000, from the conversations I’ve had,” Bane said.7

“I remember after I pitched that night, the people gave me a standing ovation. And at the time, there weren’t such things as curtain calls like they have now. Jim Kaat told me to go out of the dugout and tip my hat so I did. I think that was a pretty neat deal for the people there to do that for me.”8

Author’s Note: The author attended this game and was inspired to write this article after reviewing his scorecard and his Eddie Bane picture received at the game (shown above).

Sources consulted include Retrosheet.org, Baseball-Reference.com, The Sporting News and the Minneapolis Star Tribune.

1 Bane did not pitch in the championship game. He pitched the semifinal game, defeating the Dave Winfield-led Minnesota Gophers. Winfield was the fifth pick of the 1973 draft by the San Diego Padres. Bane was the 11th pick.

4 Otis was ejected from the game for arguing the call.

5 Hands relieved Corbin with a 2-and-0 count on Patek and completed the walk, which was charged to Corbin.