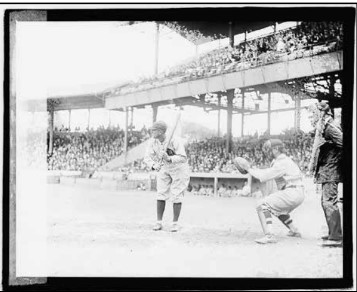 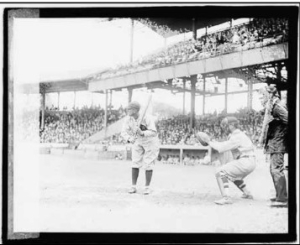 What follows is a narrative on the greatest comeback in baseball history.1

As of the first game of the July 7 Friday afternoon doubleheader with the Tigers at Griffith Stadium, the 1922 Senators were in fifth place with a record of 35-37 and they trailed the first-place St. Louis Browns by 8½ games. Detroit was a game and a half ahead of Washington, trailing the Browns by seven games.

Detroit squeaked out a 7-6 win in the first game of the twin bill, led by Bobby Veach, who was 3-for-4 with two RBIs, and Ty Cobb (triple, double, two runs scored), Topper Rigney, and Johnny Bassler, all of whom had two hits. The Senators’ Walter Johnson suffered the loss in the game, giving up all of the Tigers’ 13 hits.

To try to keep the Tigers from getting a sweep, the Senators sent George Mogridge to the hill to face Detroit’s Red Oldham. Mogridge had spent the first two years of his major-league career with the Chicago White Sox (1911-12); from 1915 to 1920, he was with the New York Yankees. On April 24, 1917, Mogridge pitched the Yankees’ first no-hit game, defeating the Red Sox, 2-1, at Fenway Park in Boston.

On December 31, 1920, the Yankees traded Mogridge and outfielder Duffy Lewis to the Senators for Braggo Roth.

In the second game, Washington scored first when Roger Peckinpaugh reached first base with a single. Sam Rice grounded out to Detroit first baseman Lu Blue and Peckinpaugh went to second.

Joe Judge, who entered the game batting .296, worked the count to 3-and-2 and then hit a pitch to center field for a double that scored Peckinpaugh with the game’s first run.

To quote a Detroit sportswriter: “Nothing of an exciting nature occurred until the Washington third that saw the Nationals getting a single with three doubles for three runs.”2

Neither team scored in the second inning, and the Tigers did not score in the third. In the bottom of the inning, Clyde Milan singled to right field with one out. Peckinpaugh got his second hit of the day, a double. Rice hit the inning’s second double, and then Judge hit the third. Three more runs added to the Senators’ side of the scoreboard for a 4-0 Washington lead.

In the fourth inning a triple by Bucky Harris and a sacrifice fly by Patsy Gharrity gave the Senators a 5-0 lead.

With one out in the fifth inning, Chick Gagnon batted for Oldham and singled to left field. Lu Blue doubled with Gagnon holding at third base. A single by Fred Haney scored Gagnon. Blue thought the ball might be caught so he remained at second base. On Cobb’s hit to left field, Blue left second homeward-bound. He beat the throw and Gharrity dropped the ball. Everybody in the ballpark saw that happen, except the one man whose opinion counted: home-plate umpire Ed Walsh, who called Blue out.3

Bobby Veach singled to score Haney and send Cobb to third base. But Harry Heilmann flied out. The Tigers had scored a pair and Washington’s lead was now 5-2.

In the bottom of the fifth inning, Peckinpaugh walked and stole second base. With two men out, Frank Brower, batting for Senators right fielder Ed Goebel, singled off Carl Holling, who had relieved Oldham to the start of the bottom of the inning. Brower’s hit scored Peckinpaugh and gave the Senators a 6-2 lead.

Two more runs came Washington’s way in the seventh inning. Peckinpaugh started it off with a single to left field. He scored on a triple to center by Rice. Judge walked. Brower forced Judge while Peckinpaugh remained at third. Brower stole second base as Howie Shanks struck out, as Peckinpaugh scored on the bad throw.4  Brower also tried to score but was out on Cobb’s throw to catcher Clyde Manion.

The Senators got two more runs in the seventh inning and scored one in the eighth, when Mogridge doubled and scored on Clyde Milan’s single to center field. Washington now led  9-2 going to the top of the ninth inning. “The haughty Griffmen, finding themselves leading by seven runs with the start of the ninth, smiled,” wrote the Washington Times’s scribe. “Possibly more than half of them were perishing from sheer hunger. They had been toiling today since high noon and it was time for ease and refreshment.”5

A Washington Herald account said, “Everything happened in the ninth inning. And it all broke like an unexpected storm over a Sunday school picnic.”6

With the game seemingly in hand, the Senators took to the field needing just three outs to add a win to their season total. “Can you picture a ballclub taking its last turn at bat seven runs down and emerging from it two to the good?”7

A single by pinch-hitter Larry Woodall, a walk to Blue, and a single by Haney loaded the bases with Cobb stepping into the batter’s box. Cobb singled to center field to score Woodall and Blue with Haney going to second base A fly ball by Ira Flagstead was the first out of the inning. Heilmann, who entered the game with a .361 batting average, worked a walk to fill the bases again. George Cutshaw singled, scoring Haney and leaving the bases full. The Tigers now trailed 9-5.

Peckinpaugh’s throw on Topper Rigney’s groundball was late and Cobb scored the Tigers’ fourth run of the inning. Howie Shanks missed a tag on Cutshaw on a groundball by Clyde Manion, allowing Heilmann to score. The Senators were now leading by just two runs, 9-7, and the bases were still loaded.

Woodall got his second hit of the inning, a single, and both Cutshaw and Rigney scored. The game was tied, 9-9.

The Tigers weren’t through. They took the lead on a single by Blue that scored Manion and put Woodall safely at third base. Haney beat out a bunt that scored Woodall and the Tigers led, 11-9.

The Tigers’ Hooks Dauss came in to face the Senators in the bottom of the ninth. He got Peckinpaugh to foul out to catcher Manion. ShortstopTopper Rigney threw out Sam Rice and tird baseman Fred Haney threw out Joe Judge. The game was over after 2 hours and 40 minutes, and the Tigers had a thrilling (if a Detroit fan) or stunning (if a Washington fan) come-from-behind win. A Detroit writer described the scene: “You have seen a beaten fighter reeling from a beating for a place of refuge. That is the way the Nationals after going into the ninth inning happy at the thought of impending victory, staggered in broken order before the compelling influences of the Bengal drive.”8

One Washington writer opined: “Ty Cobb and his Tigers won that game because they kept at it.”9

Said another: “But the Griffs lost more than just two ball games. They lost also the whole-hearted support of approximately 17,000 fans who watched the Tigers perform the ‘Impossible’ in their last time at bat, watched them score nine runs on nine hits and three walks after the Griffs had gone into the last frame with a seven-run lead and appeared to have the game nailed in the win column.”10

Carl Holling got the win, and Tom Zachary, who retired only one of the six batters he faced, bore the loss.

Nearly a century has passed as of this writing, and the game represents the greatest comeback in major-league history.

In addition to the game story and box-score sources cited in the Notes, the author consulted Baseball-Reference.com and Retrosheet.org.