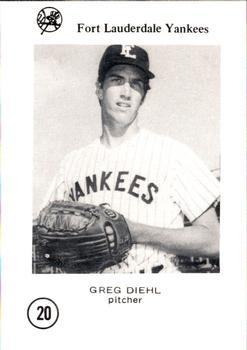 The July 7, 1974, game between the Oneonta (New York) Yankees and the Newark (New York) Co-Pilots of the Class A New York-Penn League had to be delayed for 27 minutes while the sun set behind center field at Newark’s Colburn Park.1

Before and after that interruption, Oneonta pitcher Greg Diehl left Co-Pilots hitters completely in the dark. The 22-year-old rookie righty from the University of Delaware threw only the second perfect game in league history, dominating Newark in a 9-0 victory. He followed in the footsteps of John Herbert, who threw a perfect game for Erie against Hornell in July 1955.2

The New York-Penn played a short season, so the 1974 campaign was just getting underway on July 7. Oneonta entered the game in first place with a 10-4 record, while Newark ranked fourth in the six-team league with a 6-7 record, 3½ games back.3 Oneonta was affiliated with the New York Yankees, while Newark was a Milwaukee Brewers farm club. The Co-Pilots nickname dated to the team’s original status as a Seattle Pilots affiliate during the Pilots’ one season (1969) in the American League. (After the club folded, the franchise was awarded to Milwaukee.)

Former Pilot and Milwaukee Brewer Mike Ferraro, 29, managed Oneonta. It was his first managing job, starting a career path that led to big-league skipper roles with the Indians and Royals. Three members of his team reached the big leagues, and all three started behind Diehl. Dave Bergman played first base, Dennis Werth caught, and Mike Heath played shortstop. Werth and Heath later became known to big-league fans at other positions: Werth was predominantly a first baseman and outfielder in the big leagues, while Heath appeared mainly as a catcher.

The O-Yanks, as they were called, excelled in all areas. Bergman and Werth finished one-two in batting average, hitting .348 and .336, while third baseman Pat Peterson tied for third at .330. Werth led the league in doubles with 23 and RBIs with 61. Bergman tied for the lead in triples. Center fielder David Carter led the loop in stolen bases at 28, with teammates Marv Thompson and Bergman also reaching 20 steals. The team’s pitchers achieved a remarkable ERA of 2.76—well below the league average of 4.22—and paced the loop in wins, shutouts, and complete games. They also allowed the fewest hits, home runs, and walks. Diehl ranked third in wins (eight) and ERA (1.76), tied for first with eight complete games, and handily paced the league with five shutouts.

Newark manager John Felske, also a former Brewer, oversaw seven players who reached the majors. Three of them started against Oneonta—shortstop Jim Gantner, center fielder Steve Bowling, and pitcher Moose Haas. Gantner and Haas, both rookies in pro ball in 1974, made their major-league debuts within a week of each other in September 1976 and played on the Brewers’ American League championship team of 1982. In 1974 Haas was 18 and fresh out of a Maryland high school. He went 5-5 with a 3.19 ERA in 13 starts with the Co-Pilots.

Co-Pilots batters had punch at the plate, finishing second in the league in home runs. But the team also recorded the loop’s worst batting average with a cumulative .237. Bowling was Newark’s biggest bopper, leading the New York-Penn with 12 home runs, while Gantner posted a team-best .305 average. Pitcher Barry Cort tied Diehl with eight wins, posted a strong 2.27 ERA, topped the league with 123 strikeouts, and was just off the league lead with seven complete games.4

The July 7 matchup promised a pitchers’ duel: Haas entered the game with a 3-0 record, while Diehl had surrendered a single run in his first two games.5 But Haas struggled with his command, giving up four hits and two walks as Oneonta jumped out to a 3-0 first-inning lead. Carter doubled, Thompson singled, and Haas intentionally walked Bergman. Werth hit a two-run single to score Carter and Thompson, and designated hitter Sheldon Gill singled Bergman home.6 Haas settled down from there, yielding just three singles and two walks over the next four innings.

With Diehl on the mound, Oneonta had scored all the runs it needed to win. The pitcher alternated his fastball and changeup to great effect, also mixing in sliders and curves.7 He yielded only three balls to the outfield, all routine flies, and did not walk a batter. (One news article on the game said Diehl never went to a three-ball count on any batter, while another reported that he did so only once.8) While fielding at the lower levels of the minors can be shaky, the O-Yanks supported Diehl by making no errors.

Newark turned four double plays, including three on fly balls. But the Co-Pilots also made three errors—one apiece by catcher John Buffamoyer, first baseman Ray Rudolph, and relief pitcher Terry Frawley, who replaced Haas in the sixth. Oneonta jumped on relievers Frawley and Jack Chilton for four runs in the seventh on a two-run double by replacement third baseman Kevin McNichol, a single by Gill, and a run-scoring groundout. The O-Yanks’ powerful lineup dented Chilton for two more runs in the eighth on a double by Carter, a triple by Bergman, and a fly to right field by Werth. The Yankees led 9-0.9

It’s sometimes a cliché to say that a pitcher “got stronger as a game went on.” In Diehl’s case, it was true, as he struck out nine of the final 12 batters.10 In the eighth, Diehl whiffed Bowling and third baseman Ossie Ortiz before Rudolph hit a hard grounder to third. McNichol moved quickly to his left to snap up the ball and threw to first to retire Rudolph by a comfortable margin. By all accounts, this was the closest Newark came to a hit all night.11

In the ninth, left fielder Marcos Mejias grounded to shortstop. Catcher Buffamoyer struck out swinging. That left second baseman Nelson Rodriguez as the Co-Pilots’ last hope, and Diehl set him down on three straight pitches for his 13th strikeout of the game. Afterward, Diehl admitted to nervousness in the late innings, and gave credit to McNichol for his fielding play and Werth for his pitch-calling. “Dennis caught a hell of a game,” he said. “I didn’t shake off one sign.”12

The crowd of 636 had seen New York-Penn League history—and, according to some observers, a pitching performance that would have been dominant at any level. “This kid could have won in the big leagues tonight, the way he was so overpowering,” Felske said. Newark pitching coach Ken McBride chimed in, “He has exceptional control. He’s a college kid and he’s too good for this league.”13 Oneonta ran away with the league title at season’s end, finishing 17½ games ahead of second-place Auburn, while Newark closed in fifth place, 21½ games back.

Diehl went on to post solid seasons in the Class A Florida State League in 1975 and 1976. He earned a brief promotion to Triple-A Syracuse in 1975 and an invitation to attend Yankees spring training in 1977 as a nonroster player. But Diehl saw little chance of making the big leagues, especially on a talented Yankees team that won the World Series that season and the next. Before the 1977 season began, he left baseball: “I retired to take advantage of my engineering degree and start my real life.”14

The New York-Penn League ceased operations after the 2020 season, which went unplayed due to the COVID-19 pandemic. New York-Penn pitchers threw two perfect games after Diehl’s—one by Oneonta’s Guillermo Moscoso against Batavia in 2007, and one by Batavia’s Gabriel Castellanos, Brett Lilek, and Steven Farnworth against Mahoning Valley in 2015.15

Neither Baseball-Reference nor Retrosheet provides box scores of minor-league games, but the July 8, 1974, edition of the Geneva (New York) Times published a box score.

1 “Oneonta Pitcher ‘Diehls’ Perfect Game against Co-Pilots,” Newark (New York) Courier-Gazette, July 11, 1974: B5. Sunset delays were an intermittent issue at Newark’s Colburn Park, as they have been at other ballparks laid out before the advent of night baseball. (Wahconah Park in Pittsfield, Massachusetts, is another example of a ballpark well known for its sun delays.)

4 Other members of the Co-Pilots who reached the major leagues but are not mentioned here were Gary Beare, Butch Edge, and Willie Mueller.

7 Jollow. In this article, Diehl described the combination of his fastball and changeup as most effective.

8 Jollow reported that Diehl never went to a three-ball count. The Newark Courier-Gazette (see note 1) reported that Newark third baseman Ossie Ortiz worked Diehl for a 3-and-2 count before striking out in the fifth inning.