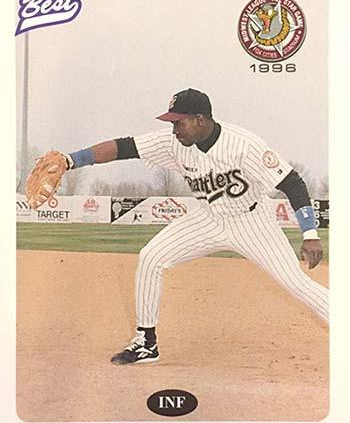 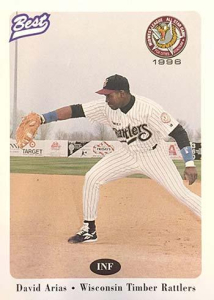 David Ortiz built his Hall of Fame career and Boston Red Sox legend on clutch hits—like the back-to-back extra-inning game-winners he delivered in Games Four and Five of the 2004 American League Championship Series in a pair of win-or-go-home games on the Red Sox’ path to their first World Series championship in 86 years.

Before he ever reached the majors, the Dominican-born slugger was already a dangerous hitter with the game on the line. He proved it as far back as July 7, 1996, more than a year before his first major-league game. Playing first base for the Wisconsin Timber Rattlers of the Class A Midwest League, the 20-year-old capped a 5-for-5 day at the plate with a walk-off single that delivered a win for the Timber Rattlers over the South Bend (Indiana) Silver Hawks.1

While some parts of the Ortiz legend were already in place in 1996, others were still filling in. He was still known as David Arias, the name he played under until he reached the majors.2 And he wasn’t with the Red Sox yet. The future “Big Papi” was a Seattle Mariners farmhand, having signed as an international free agent in November 1992, days after his 17th birthday. The Mariners sent him to the Minnesota Twins in September 1996 as a player to be named later, completing an earlier trade for Dave Hollins. Ortiz made his major-league debut with the Twins near the end of the 1997 season after climbing the ladder that season all the way from Class A.3

On July 7, 1996, the 14 teams of the Midwest League had recently begun the second half of their season. Wisconsin, managed by future Mariners and Marlins coach Mike Goff, won the first-half title in the Central Division with a 46-21 record. They were fifth and last in the second half with a 6-10 record, four games behind first-place Peoria. Personnel changes might have played a part in the team’s decline: Four of Wisconsin’s regular players were called up to the Lancaster (California) JetHawks, Seattle’s highest Class A affiliate, at the season’s halfway point.4

Their opponent, South Bend, was a Chicago White Sox affiliate managed by future Cleveland Indians coach Dave Keller. The Silver Hawks had compiled a first-half record of 30-36, placing them third in the Eastern Division. They were also in last place as the second half got rolling, with a 7-9 record that placed them two games behind the first-place Michigan and West Michigan teams.5 South Bend had also recently lost two top players to promotions. First baseman Mario Valdéz hit a scorching .376 for the Silver Hawks that season, while infielder and designated hitter Jeff Liefer hit .325.6

Ortiz was one of six Timber Rattlers who eventually reached the major leagues. Another of them, pitcher Damaso Marte, had thrown the first shutout of his minor-league career against South Bend the previous night.8 A third future major leaguer, Roy Smith, was Wisconsin’s starting pitcher on July 7. Smith, a 20-year-old righty, had been the Mariners’ 13th-round pick in the June 1994 draft and was in his third pro season. For the full season, he led the loop in losses, going 6-13 with a 5.12 ERA in 27 starts.9 He eventually reached the majors with Cleveland in 2001 and 2002, making 13 appearances, mostly in relief.10

Eight members of the 1996 South Bend team reached the majors, and two of them appeared on July 7. Future White Sox and Toronto Blue Jay Brian Simmons led off and played center field. He led the team with 17 home runs. Luis García, who slipped six games with the 2002 Baltimore Orioles into a well-traveled 17-season pro career, hit seventh and played left field.11

Twenty-three-year-old righty Tim Kraus, drafted by the White Sox in 1995 out of the University of Notre Dame, got the start on the mound. Kraus made 35 appearances for the Silver Hawks; he typically worked in middle relief, posting a 3-4 record and 2.67 ERA. In his five starts, he compiled a 1.74 ERA.12 The 1996 campaign was Kraus’s only full pro season. He worked in five games for Rookie-level Bristol the previous season and retired in June 1997 after compiling a 4.99 ERA in 15 games with Class A Hickory.13

For 5½ innings, Smith and Kraus were the story, as neither team could push across a run. Wisconsin finally broke the deadlock in the sixth, notching a pair of unearned runs to claim a 2-0 lead. News accounts from both teams’ home newspapers do not specify how those runs scored. Box scores show that South Bend third baseman Brent Wilhelm, shortstop Jeff Johnson, and second baseman Scott Friedrich were all charged with errors at some point in the game, so it’s possible that an infield misplay could have been a factor. (South Bend led the league in errors that season, committing 242 in 136 games.)

Entering the eighth inning, Wisconsin’s Smith had given up just three hits, all with two out.14 But South Bend rallied, starting with a leadoff triple by right fielder David Cancel.15 Smith gave way to reliever Brent Iddon, Iddon, a 20-year-old righty from Sydney, Australia, was a reliable go-to for the Timber Rattlers that season. He went 11-4 with a 2.78 ERA and 11 saves in a team-leading 50 relief appearances, striking out 114 hitters in 97 innings.16

On this day, though, Iddon was not at his best. Friedrich hit a sacrifice fly to make the score 2-1. A walk, two hits, and an error by shortstop Joel Ramirez—Wisconsin’s only bobble of the game—added three more runs for a 4-2 South Bend advantage. Designated hitter Ryan Topham earned credit for South Bend’s other RBI of the inning.

Wisconsin manager Goff might have called on lefty reliever Denny Bonilla, whose 1.71 ERA was the team’s best at the time. But Bonilla was unavailable: He’d slipped during pregame warm-ups the previous day and injured his nonthrowing shoulder. He watched the game from the stands.17

Ortiz had collected singles in his first three at-bats. In the eighth inning, he brought the Timber Rattlers within a run by hitting his 15th home run of the season, off South Bend’s third pitcher, righty Derek Hasselhoff. Hasselhoff had also made the league’s all-star team.18

Hasselhoff was still on the mound to start the ninth, facing the bottom of the Timber Rattlers’ lineup and nursing a 4-3 lead. Singles by Ramirez and second baseman Adonis Harrison put runners at the corners with one out.19 Designated hitter Chad Sheffer, 0-for-4 to that point, drove in Ramirez with a game-tying single to left field, and third baseman Luis Figueroa20 hit still another single to load the bases.

Manager Keller went back to his bullpen, summoning 23-year-old lefty Sean Duncan to face Ortiz. Duncan was 2-5 with a 3.38 ERA and three saves with South Bend. Midwest League opponents hit only .214 against him.21 He also spent time that season with Chicago’s top Class A team at Prince William in the Carolina League.

After the game, Ortiz told a reporter that he preferred to hit with the bases empty, because he could concentrate entirely on the pitcher. That would not be the case in this situation. “I had to make it just me and the pitcher,” he said. “You can’t go up there thinking negatively. I went up relaxed and hit the ball.”22

The lefty-swinging Ortiz blooped a ball to the opposite field. Garcia gave chase but couldn’t make a catch. The ball wasn’t hard-hit, but it accomplished its goal, falling in for a game-winning single as Harrison came home from third. Hasselhoff took the loss while Wisconsin’s third pitcher, Russell Jacob,23 earned the win with a shutout ninth.24

Ortiz was “swarmed” by members of the crowd of 4,120 in a postgame autograph session and stayed long after the signing was supposed to end. His magnetic personality toward fans and teammates was already evident in 1996. A midseason newspaper profile noted that he had “emerged as one of the Timber Rattlers’ biggest leaders,” keeping the team loose with a stream of pranks, jokes, and good-natured needling.25

Goff predicted a bright future for the young first baseman, saying: “He’s made more strides as a hitter this year than any hitter I’ve ever seen. David’s really in a rhythm. He’s gotten better at being balanced and keeping both hands on the bat. … Lately he’s gone up to the plate expecting to hit the ball hard, and he’s done just that.”26 Ortiz closed the season hitting .322 with 18 homers and 93 RBIs, well on his way to making a name for himself beyond the Midwest League.

Neither Baseball-Reference nor Retrosheet provides box scores of minor-league games, but the July 8, 1996, edition of the Appleton (Wisconsin) Post-Crescent published a box score.

1 The home base of the Wisconsin Timber Rattlers was Appleton, Wisconsin.

2 His full name is David Americo Ortiz Arias, with Ortiz being his father’s last name and Arias his mother’s maiden name. The Mariners organization mistakenly listed the young ballplayer under his mother’s name; he eventually corrected the mistake and adopted his preferred surname, Ortiz. This story uses Ortiz for reasons of familiarity.

3 The Twins released Ortiz in December 2002; he signed with the Red Sox the following month.

10 The other Wisconsin players who reached the majors but did not play on July 7 were Kevin Gryboski, Aaron Scheffer, and Ramon Vazquez.

11 In addition to Leifer and Valdez, the players on the South Bend team who reached the majors but did not appear in the game were Kevin Beirne, Carlos Castillo, Chris Heintz, and Mark Johnson.

16 Iddon tied for fourth in the league with appearances. Two of the pitchers ahead of him, José Santiago and Armando Almanza, reached the major leagues. Iddon’s career topped out at the High-A level.

19 This run of events is extrapolated from game stories and box scores. The Appleton Post-Crescent said Wisconsin collected five hits in the ninth inning. Ortiz’s game-winning single and singles by Sheffer and Figueroa are mentioned in the game story. Ramirez and Harrison each collected only one hit in the game, so if Wisconsin had a five-hit ninth, they must have gotten their hits at that point. Left fielder Faruq Darcuiel, who batted between Ramirez and Harrison and went hitless, must have accounted for the inning’s only out.

20 Game stories and box scores refer to him as Figuerora, but Baseball-Reference and other newspaper sources spell his name Figueroa.

23 The Appleton Post-Crescent regularly spelled the pitcher’s name Jacobs during the 1996 season. Baseball-Reference spells it Jacob, and news coverage from other stops in his professional career tends to agree.

24 Jacob had been on the disabled list since May 23 with a shoulder injury and was activated the day before the game. “Arias’ Big Hit Caps His Big Game.”

25 Jeff Sherry, “Arias Keeps Rattlers Loose,” Appleton Post-Crescent, July 11, 1996: C1. Ortiz could apparently get as well as he gave: The story mentions teammate Sheffer giving him a faceful of shaving cream during a TV interview.