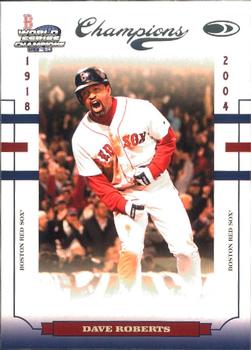 The Red Sox were down three games to none in the 2004 American League Championship Series. None of the previous 25 major-league teams that had been down 0-3 had even forced a seventh game, much less won one. After the 19-8 beating they had taken in Game Three, some rabid Red Sox fans had sold off their Game Four tickets, not wanting to witness another heartbreaking defeat at the hands of the too-often-triumphant Yankees. There was hope, but it was about as slim a hope as could be.

The Yankees had won six postseason games in a row. The Red Sox, though, had won seven of their last nine when facing elimination.

Boston’s Derek Lowe faced off against New York’s Orlando Hernandez. Lowe said, “I told my wife this was going to be the hardest game I’ve ever pitched. We’re down 0-3, and it could be my last game for the Red Sox. And I’ve pitched once in 16 days.”1

Before the game, irrepressible first baseman Kevin Millar had gone around the clubhouse and the field repeatedly declaring, “Don’t let us win tonight!” Boston GM Theo Epstein later recalled: “We had just been humiliated. There was a sense of how bad can this get? Once we got in the clubhouse, I was encouraged by how tight the mood was with the players. Millar and a few others were optimistic and energetic and a little out of control. Their refrain was, ‘Don’t let us win. Don’t let us win tonight,’ and Millar rattled through the whole pitching rotation. Win tonight, then we got Pedro, then we got Schilling. …”2

Millar later explained, “It came from me really believing in our team. … Looking at it realistically, I knew it was hard enough to win four games in a row against the Royals, let alone the mighty Yankees, you know? … We were down three games, got crushed in Game 3, and I didn’t really like our matchup in Game 4 because the Yankees had a knack for hitting Lowe’s sinker since they’d seen him so much. But if he could come through …we’d have Pedro in Game 5 and Schilling in Game 6 and then anything is possible in a Game 7 because even the Yankees have that human factor. They’d be so tight and scared if we could just put them in that position. So I knew if we could win that game, the entire pressure went to them. We didn’t have any pressure. We were supposed to lose. Now we’re just having fun. Now we’re going to watch them choke.”3

The notion of the Yankees choking at this point seemed like a sick joke.

Red Sox catcher Jason Varitek knew his team had been playing subpar baseball. If they’d been playing well for the first three games of the ALCS and still lost all three, that would have been one thing. But their pitching hadn’t been right. He knew that if the pitching could correct itself, they might have a chance. “We didn’t pitch the ball well,” he said the following spring, “and the thing that that team did best, with that lineup that we were facing, you had to pitch the ball well. So we had confidence, and a lot of people who had played in that clubhouse had been on teams before that had come back so we had that in our corner.”4

Both pitchers got through the first two innings without seeing a run scored, but Alex Rodriguez homered off Lowe in the top of the third — over the Green Monster — to stake New York to a 2-0 lead.5

At what might have been the halfway point in the game (4½ innings), it was still 2-0, Yankees. The Red Sox had only one second-inning hit, but in the bottom of the fifth, they went ahead, 3-2, on walks to Millar and Mark Bellhorn, a single by Orlando Cabrera, another walk to load the bases, and then a two-run single to center by David Ortiz.

In the top of the sixth, Hideki Matsui hit a one-out triple that eluded Johnny Damon in center field. Mike Timlin replaced Lowe on the mound. Bernie Williams’s single scored Matsui, tying the game. After a walk and an infield single, Tony Clark hit another infield single and the Yankees were ahead again, 4-3. The Red Sox had led for only 16 minutes.

And so the score remained until the bottom of the ninth. The temperature had dropped to the low 40s. Future Hall of Fame closer Mariano Rivera (as of 2020, the only player ever unanimously elected) had worked a scoreless eighth. All he needed to do was get three outs and the Yankees would be headed to the World Series. Rivera was 6-for-6 in save chances against the Red Sox in postseason play.

The clock turned past midnight. Rivera walked leadoff batter Kevin Millar on five pitches. Dave Roberts came in to run for Millar. Everyone in the park, and the world, knew what Roberts’s assignment was: Steal second base. After three pickoff throws by Rivera, that is just what he did — safe by about six inches. Bill Mueller singled right up the middle — right past Rivera into center field — and tied the game as Roberts ran home. The Red Sox put runners on first and third with just one out, but couldn’t get the winning run across, so the game went into extra innings.

One of the team behind the team for Boston was Billy Broadbent, the video/advance scouting coordinator for the Red Sox. Dave Roberts, knowing that Rivera was likely to be put into the game if anyone got on first base, asked Broadbent to show him video of all the reliever’s throws to first base. Broadbent said, “I called up Rivera’s clip on the screen and he came back and he watched.”6

Alan Embree allowed New York just a single in the 10th. Tom Gordon, who took over for Rivera, allowed nothing in the bottom of the inning.

Embree and Mike Myers both pitched in the top of the 11th. There were two runners on base, but the third Boston reliever, Curtis Leskanic, secured the third out. Gordon walked one but there was no threat from the Red Sox in the 11th.

Leskanic allowed just a single in the top of the 12th. Paul Quantrill came on to pitch for the Yankees.

First up was Manny Ramirez. He singled to left field. That brought up David Ortiz, who had also been spending time studying video with Billy Broadbent. As DH he had time while the Red Sox were in the field. He studied. He was ready for Quantrill.

Jason Varitek told the author that Ortiz had truly believed he was going to win the game at that very moment.7

“That’s my mentality every time I go to the plate,” Ortiz said. “Every time I go to the plate, I feel it’s my responsibility to get it done. And I carry that over with me as long as I’ve played baseball. It’s my priority. That’s what I feel like.” Recalling prior at-bats against Quantrill, including a strikeout in Game Three, his memory refreshed by video, Ortiz said, “I missed my pitch, and I was like … I couldn’t believe it. … Quantrill had got me out a couple of times on the same pitch and I was like, ‘OK, throw it now! I ain’t goin’ to miss it this time.’ He did — and you saw what happened.”8

“He did exactly what I thought he would,” he said later. “He pitched me inside. … I just had to say back and wait for the ball to break, and then I had to open my hips and try to pull. And when I finally got the pitch I wanted, when I got one I could handle, I did exactly what I wanted to do. I smoked it, bro.”9

Ortiz had driven in four of Boston’s six runs. The only other team down 0-3 to win a Game Four in extra innings had been the 1910 Cubs.

The Yankees had let the Red Sox win. It was after midnight and already October 18. Game Five would be played that evening.

Varitek said, “We gained confidence once we finally won a game.”10 That may have provided something of an understatement, but Game Five was no piece of cake. It ran 14 innings.

Curt Schilling added, “We felt we had them when we won Game 4. Whether we did or not I don’t think was relevant. We believed it. Which was all that really mattered.”11

In addition to the sources cited in the Notes, the author consulted Baseball-Reference.com, Retrsosheet.org, and video of the game on YouTube.com.

1 John Tomase, “In Possible Fenway Farewell, Lowe Rises to the Occasion,” Lawrence (Massachusetts) Eagle-Tribune, October 18, 2004. Included in Allan Wood and Bill Nowlin, Don’t Let Us Win Tonight: An Oral History of the 2004 Boston Red Sox’s Impossible Playoff Run (Chicago: Triumph Books, 2014), 111. Actually, Lowe had pitched one inning — the 10th inning — of Game Three of the Division Series on October 8 and gotten the win. This was his first start since October 3.

5 Someone on Lansdowne Street threw A-Rod’s home-run ball back into the park — and Johnny Damon took it and threw it back out. Then the ball came back again, and umpire Joe West put it in his pocket.

8 David Ortiz interview with Bill Nowlin, May 24, 2013. Ortiz further elaborated about his preparation: “I go through a lot of videos right after batting practice, and I go through a lot of video right before the game. Combined, I would say I spend about an hour. Every day. Watching videos. Memorizing things is, I would say, like the most important thing in baseball. If you’ve got a good memory and you are focused, you’re going to remember whatever happened before and whoever you’re facing. I’ve got a good memory. I can tell you about a game. I can memorize things real quick, whatever happened. I even have déjà vu sometimes. Some guys I’ve faced and I see things happening and it feels like it happened before. It’s just my memory working when it comes onto that.”