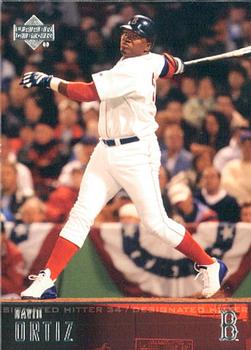 The Red Sox had one win in the books, with their extra-inning Game Four win over the Yankees. They weren’t going to be swept in four games. They had fresh energy and a new lease on life, if only for one more day. And they had Pedro Martinez ready to start. And many of them had bought into Kevin Millar’s mantra before Game Four: “Don’t Let Us Win Tonight.”

Bill Mueller said, “Coming right back for Game 5 was an advantage for us. There was no stoppage. The games were running late, and then you turn right back around and do it again. I think that was a plus. You step out for two days and then come back in, some of that momentum could be squandered. Instead, it stayed at the ballpark. … It kept going in our direction.”1

Pedro Martinez was no lock against the Yankees. He had 31 starts against them in his career and the team was 11-20 in those starts. In 2004 he was 1-3 with a 5.29 ERA combining the regular season and postseason.

He struck out leadoff batter Derek Jeter on three pitches. He walked Alex Rodriguez, then struck out Gary Sheffield and got Hideki Matsui to fly out to center.

Mike Mussina started for the Yankees, and the Red Sox got to him for two runs in the bottom of the first. Three singles in succession, the third one an RBI single by David Ortiz, produced the first run. A bases-loaded walk to Jason Varitek (batting right-handed against a right-handed pitcher for only the second time in his entire major-league career; he’d been 4-for-49 — .082 — against Mussina) produced the second.

In the top of the second, Bernie Williams homered to right field on the first pitch Pedro threw him. It was his 21st postseason home run. It was 2-1 through the first five innings, both pitchers having settled down.

In the top of the sixth, though, Pedro gave up two singles and hit Miguel Cairo. The bases were loaded, with two outs, when Jeter doubled down the right-field line on Pedro’s 100th pitch, clearing the bases and giving the Yankees a 4-2 lead. Pedro hit the next batter, too (A-Rod). Broadcaster Tim McCarver suggested that it “looked intentional.”2 Martinez walked Gary Sheffield, but Matsui lined out to end the inning.

Pedro was done, though, and Mike Timlin took over in the seventh. It was still 4-2, Yankees.

In the bottom of the seventh, Boston’s Mark Bellhorn led off with a double to right field and manager Joe Torre beckoned Tanyon Sturtze in to relieve. Sturtze induced a popup but then walked Orlando Cabrera, so Torre called on Tom Gordon to pitch to Manny Ramirez. Gordon got Ramirez to ground into a 5-4-3 double play.

David Ortiz led off the bottom of the eighth. The Red Sox were down to their last six outs. On the second pitch, Ortiz homered off Gordon. Millar walked and then, in something of a replay of Game Four’s ninth inning, Dave Roberts came in to run for Millar, Boston needing just one run to tie the game. There was no stolen base, but Trot Nixon lined a single to center and Roberts ran to third. Mariano Rivera was summoned. He got Jason Varitek to fly out to straightaway center field, but Roberts easily tagged up and scored the tying run. For the second game in a row, Rivera had blown a save, both on October 18. The score was tied, 4-4.

As was the case the night before, the temperature had dropped into the 40s.

Bronson Arroyo took over from Foulke and the Yankees didn’t get the ball out of the infield in the top of the 10th. Felix Heredia took over for Rivera and struck out Ortiz, but after Doug Mientkiewicz hit a ground-rule double, Paul Quantrill replaced Heredia. He retired the next two batters.

Mike Myers and Alan Embree struck out three batters in the Yankees’ 11th, though there was a single in there, too. In the bottom of the 11th, back-to-back singles by Bill Mueller and Mark Bellhorn showed some promise, but Johnny Damon’s attempt at a bunt ended up in the catcher Jorge Posada’s glove, in fair territory.4 Esteban Loaiza took the ball, and Orlando Cabrera hit into a 6-4-3 double play.

Tim Wakefield became the seventh pitcher of the night for the Red Sox. Loaiza was New York’s seventh pitcher. Each team got one runner on base in the 12th, but neither team scored. Nor did either team score in the 13th, though Wakefield’s knuckleball proved very challenging for his catcher. (Doug Mirabelli had caught Wakefield for all but two innings during the regular season.)5 Varitek was charged with three passed balls in the one inning, the first on a batter Wakefield had struck out. The Yankees got runners on second and third, with two outs, and Wakefield struck out Ruben Sierra, swinging — and Varitek held onto the pitch.

Loaiza struck out Bellhorn in the 14th, then walked Damon. He struck out Cabrera, but then walked Manny Ramirez. Two on, two out. Curtis Leskanic was up in the Boston bullpen, throwing and ready to go in if the game went to the 15th. The game had already become the longest game by innings in major-league postseason history. David Ortiz stepped into the box, the hero of Game Four. Pitcher and batter battled hard. The pitch sequence was:

On the 10th pitch of the at-bat, Loaiza’s 59th pitch in relief, Ortiz seemed to fight it off, maybe even breaking his bat, but ball dropped in — a little blooper to center field. Damon scored easily; Bernie Williams didn’t even attempt a throw.

It was the third playoff win in a row that David Ortiz had won with his bat, and he’d driven in three of Boston’s five runs.

In Game Five, the Yankees had been 1-for-13 with a player in scoring position, leaving 18 men on base. The Red Sox had been 1-for-12, before Ortiz drove in Damon, with 10 players left on base.

Over the three games — Game Three, Game Four, and Game Five (35 innings in 15 hours and 11 minutes — averaging just over five hours per game), the Yankees had left 39 men on base and the Red Sox had left 31.

A total of 16 Yankees pitchers had thrown 636 pitches. The Red Sox had used 19 pitchers and thrown 663 pitches.

Red Sox manager Terry Francona also credited the Boston bullpen. “To get shutout innings out of your bullpen for that length of time [eight innings], it was an unbelievable performance. You can’t imagine how happy I am that Wakefield got to end the game.”6

In addition to the sources cited in the Notes, the author relied on Baseball-Reference.com, Retrosheet.org, and the YouTube video of the game.

3 Bullpen catcher Dana LeVangie: “I called from the bullpen and said, ‘Hey, listen. Tell these guys to get their gloves and have them walk across the field.’ It was incredible, the intensity it brought to the park. It also sent a message to the Yankees — we’re not going down without a fight, no matter what.” LeVangie interview with Bill Nowlin, June 7, 2013.

5 Doug Mirabelli had caught Wakefield in the bullpen. “His ball was ridiculous. It’s hard enough catching Wake’s knuckleball, but there are degrees of knuckleballs, and this was like a 10. I would have struggled catching him that night — and I catch him all the time.” Mirabelli interview with Bill Nowlin, May 17, 2013; Wood and Nowlin, 150.