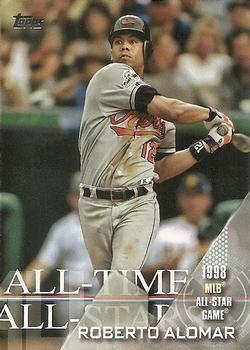 “I’m going to give it (the All-Star MVP trophy) to my mom. I think she’s the one who deserves it. When we (he and his brother Sandy Alomar Jr., the 1997 MVP) were young, she used to take us to the ballpark. Without her, we wouldn’t be here.” — Roberto Alomar, who earned MVP honors at the 69th All-Star Game.1

To nobody’s great surprise, the 1998 All-Star Game played in the high altitude of Denver was the highest-scoring midseason classic ever. A ballpark-record crowd of 51,267 looked on as the teams combined for a record 31 hits, only three of which were home runs. American League batters had 19 hits (including two homers), and their runners combined for six stolen bases in a come-from-behind 13-8 win. It was the second consecutive win for the AL and the eighth in 11 years. The 21 runs broke an All-Star Game record that had stood since 1954.

The scoring barrage did not start immediately. David Wells of the Yankees, who had pitched a no-hitter earlier in the season, was named to start the game by Indians manager Mike Hargrove, and Greg Maddux of the Braves was the National League starter, selected by his Marlins manager Jim Leyland. The first two innings were scoreless, although the American League threatened in the opening inning. Kenny Lofton singled and stole second base. He advanced to third on a bunt single by Roberto Alomar, but with runners on the corners and none out, Maddux got out of the jam striking out Alex Rodriguez with the bases loaded and two out to end the threat. In the second inning, Pudge Rodriguez singled off Maddux but was eliminated on a double play. Tom Glavine relieved Maddux in the third inning and pitched a scoreless frame.

The NL jumped to a 2-0 lead on a third-inning two-run single by Tony Gwynn off Roger Clemens. Denver favorite Larry Walker led off the inning with a walk and advanced to second on a single by Atlanta’s Walt Weiss, who was in his first All-Star Game, at age 34, in his 12th major-league season. Glavine’s bunt advanced the runners to second and third, and the bases became loaded when Clemens hit Craig Biggio of Houston with a pitch. Gwynn’s run-scoring single to right went off the glove of second baseman Roberto Alomar.

As Weiss, who had spent four seasons with the Rockies, stood at first base after his single, AL first baseman Jim Thome came over and tapped Weiss on his chest, near the heart, with his gloved hand. The tap had more than a bit of significance.2 It had been an eventful couple of weeks for Weiss. His 3-year-old son, Brody, contracted an illness related to a deadly form of E. coli bacteria. Weiss rushed home to be with his family. Brody was released from the hospital and was at the game. By the start of the game, the Weiss story was well known, and the fans gave Weiss the loudest cheers as the players were being introduced. By the time Weiss signed on as manager with the Rockies in 2013, Brody was a star high-school shortstop, and that year he was drafted by the Rockies in the 22nd round. He chose to go to college.

The AL, held scoreless for the first three innings, broke through in the top of the fourth, and proceeded to score in each of the game’s final six stanzas.

In the fourth inning, Tom Glavine was in his second inning of work. The American League batted around, scoring four runs. Keying the rally were Pudge Rodriguez’s second consecutive single, a two-run double by the starting AL shortstop, Cal Ripken Jr. (scoring both Pudge and Alex Rodriguez), a bases-loaded walk to Ken Griffey Jr., and a sacrifice fly by the Rangers’ Juan Gonzalez, who at the time led the majors in RBIs with 101.

Walt Weiss’s second single brought the NL to within a run of the lead in the bottom of the fourth, but the AL responded with a run of its own when Alex Rodriguez homered in the top of the fifth.

Young Bartolo Colon of the Indians, in his first All-Star Game appearance, came on to protect the two-run lead, but yielded a triple to Devon White and walked Mark McGwire of the Cardinals. The next batter was Barry Bonds, to whom Colon fed four straight fastballs that resulted in two balls and two strikes. The next pitch was an off-speed pitch that went out much more quickly than it came in, sailing 451 feet off the façade just below the ballpark’s upper deck in right field. The National League led 6-5, and Colon’s family watching the game on television in the Dominican Republic saw the pride of the family on the verge of being tagged with the loss after blowing the lead. (Bonds and his father, Bobby Bonds, are one of the two father-son combos to homer in All-Star competition, the other being the Griffeys.) 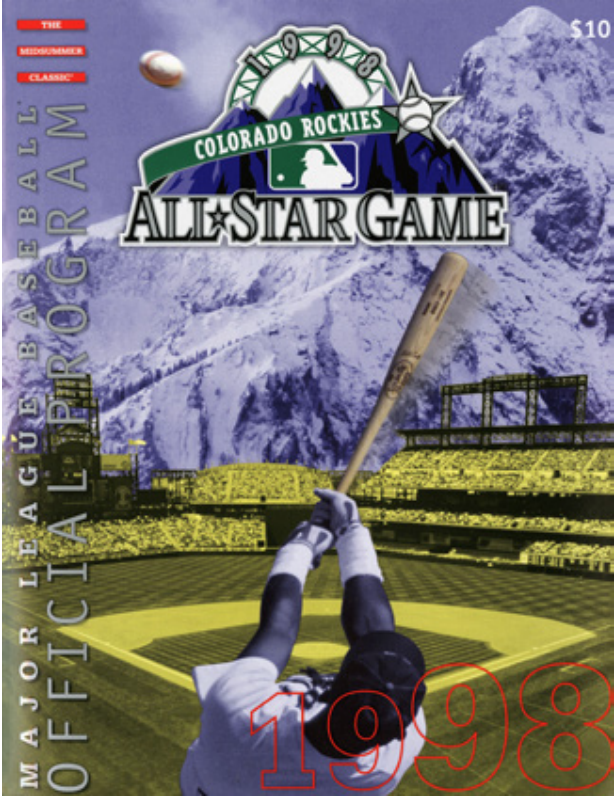 The American League went ahead to stay with three sixth-inning runs, highlighted by defensive lapses by the National League and singles and stolen bases by both Pudge Rodriguez and Baltimore second baseman Roberto Alomar. With the bases loaded, NL catcher Javy Lopez was unable to handle a pitch by reliever Ugueth Urbina, and Roberto Alomar, who had singled to lead off the inning, scored on the passed ball. Ken Griffey Jr., who had reached on an infield hit, scored on an Urbina wild pitch. Pudge Rodriguez’s single sent Jim Thome home with the inning’s final run. It was the last of three hits in the game for the Texas Rangers catcher, who was making his sixth consecutive All-Star Game start and his seventh appearance overall. His three hits made him the first catcher to achieve the feat in an All-Star Game.

It looked as if the seesaw would swing back in the National League’s favor in the bottom of the sixth inning when Andres Galarraga, who had played five great seasons with the Rockies before moving on to the Braves, sent a long fly ball to center field with two runners on. However, the ball did not clear the fence and was gloved by center fielder Darin Erstad. AL reliever Rolando Arrojo put a zero on the board and the AL took an 8-6 lead to the seventh inning.

Roberto Alomar’s second hit of the game, a seventh-inning homer, put the AL up 9-6 and the American Leaguers tacked on another run in the eighth inning, thanks to singles by Alomar and Omar Vizquel, to extend their lead to four runs.

The American League took a 10-6 lead into the bottom of the eighth inning. The National League was down to its last six outs and loaded the bases off Boston’s Tom Gordon. Moises Alou singled and advanced to second when Edgar Renteria reached on an error by Scott Brosius. A walk to Fernando Viña loaded the bases for pinch-hitter Greg Vaughn. Vaughn singled to left and when two runners scored, the lead was cut to two.

On the subsequent play, Cleveland’s brilliant shortstop, Vizquel, who had replaced Ripken at the position, grabbed a groundball up the middle by Andres Galarraga, forced White at second and threw to first base to complete the double play and the inning. For Vizquel, who was in the midst of his sixth consecutive Gold Glove season, it was his first All-Star Game in 10 major-league seasons. He had spent his time videotaping the festivities on the Monday before the game.3

The game advanced to the ninth inning with the score 10-8 in favor of the American League, and the AL scored three runs in their half of the inning. Scott Brosius of the Yankees singled and stole second base. He scored on a single by Ray Durham. Erstad reached on an error by second baseman Fernando Vina and scored on a fly ball by Manny Ramirez. The final run came home on a single off the bat of Rafael Palmeiro.

Troy Percival of the Angels came on in relief to get the final three outs for the American League. The game ended in 3:38, the longest nine-inning All-Star Game to that point.

Cal Ripken Jr. started his 15th consecutive All-Star Game, breaking the all-time record, and Pudge Rodriguez’s three singles tied an All-Star record. Ripken was inducted into the Hall of Fame in 2007 and Rodriguez in 2017.

Roberto Alomar was named the game’s MVP for his three hits, each of which factored in the scoring. He became part of the Cooperstown induction class of 2011.

In addition to the sources shown in the notes and Baseball-Reference.com, the author used: