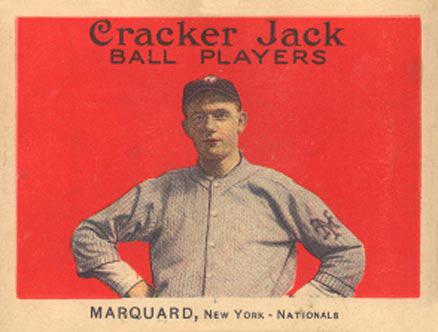 Rube Marquard, a 25-year-old southpaw on the New York Giants, began the 1912 season with a phenomenal 19-0 won-lost record. His 19 consecutive victories tied the major-league record set by Tim Keefe in 1888. On July 7, 1912, the Giants were in first place in the National League with a remarkable 56-13 record. A “wave of Marquard hero-worship” swept through New York, and fans called the team “The Rube Marquard Steam Roller Company.”1

The Giants arrived in Chicago for a four-game series with the second-place Cubs at the West Side Grounds. Marquard tried for a record 20th consecutive victory in the first game of the series on Monday, July 8. Opposing him was an impressive right-handed spitballer, Jimmy Lavender, a 28-year-old rookie who had thrown three consecutive shutouts. “I expect to break the world’s record,” said Marquard. “They are all after me, and every club will put their best pitcher in the box against me. But I have beaten them so far, and I expect to keep on.”2

The attendance was reported to be 15,000.3 Many Chicago fans cheered for Marquard, forgoing their usual loyalty to the Cubs in their desire to see him get the record.4

The Giants were not at full strength: Captain and second baseman Larry Doyle, who led the team with a .376 batting average, suffered an attack of food poisoning in New York and did not travel with the team.5 Replacing him in the lineup was Heinie Groh, a nervous 22-year-old rookie.

Marquard gave up the first hits of the game, clean singles to center field by Heinie Zimmerman and Tommy Leach to lead off the bottom of the second inning. Vic Saier stepped to the plate and missed two bunt attempts before grounding the ball to second baseman Groh. It would have been an easy double play if Groh had simply thrown the ball to shortstop  Art Fletcher at second base. Instead Groh waited in the baseline to tag the oncoming Leach, but the savvy Leach retreated toward first base and Groh chased him unsuccessfully. By the time Groh threw to Fred Merkle at first base, it was too late to get the speedy Saier. And by the time Merkle threw to Fletcher at second base, it was too late to get Leach. Fletcher threw home to get Zimmerman, but catcher Chief Meyers dropped the ball in a collision, as Zimmerman tallied the first run of the game. 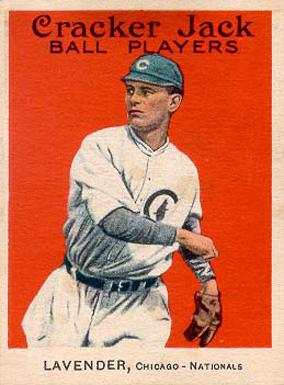 Johnny Evers tapped a bunt single to load the bases with nobody out. Marquard bore down and fanned the next three batters, but Leach scored on a wild pitch for the second run of the game.

The Giants got one back in the top of the third. Fred Snodgrass was hit by a Lavender pitch, and Beals Becker singled sharply to right field, sending Snodgrass to third base. When Merkle grounded to Lavender, Snodgrass was caught in a rundown between third base and home, which took long enough for Becker to advance to third base and Merkle to make it to second. Red Murray stroked a single to right field, scoring Becker, but right fielder Frank Schulte “cut down Merkle at the plate with a perfect throw.”6

An error by Groh in the fourth inning opened the door again for the Cubs. After Leach walked, Groh fumbled Saier’s grounder. Sacrifices by Evers and Jimmy Archer scored Leach and moved Saier to third base, and Lavender’s single brought Saier home.

The Giants threatened in the top of the fifth. With one out, Snodgrass singled on a “stinger” to third baseman Zimmerman; the ball ran up Zimmerman’s arm and shot 20 feet in the air.7 Becker singled past first base, and Merkle’s single over second base drove in Snodgrass and sent Becker to third. Murray followed with a short fly to right field, close to the foul line; Schulte raced in and caught it, and fired a throw to the plate that kept Becker at third. Merkle and Becker then tried a double steal; catcher Archer threw to shortstop Joe Tinker, who returned it to Archer in time to get Becker at the plate.

The Cubs’ defense was snappy while the Giants’ defense was sloppy. In the sixth inning, Saier singled and Evers tripled to the right-field wall. Fletcher made a fine play by grabbing Archer’s grounder and throwing home in time to get Evers. But Snodgrass in left field ran in to catch Lavender’s popup and muffed it, and in his haste, threw the ball over Meyers’ head and into the grandstand, allowing Archer to score. Snodgrass was charged with two errors on the play. Marquard was taken out of the game after six innings with the Giants trailing 6-2.

The Cubs added a run in the eighth inning off reliever Jeff Tesreau. Meanwhile, “with consummate coolness and skill,”8 Lavender retired 12 batters in a row over the final four innings to seal the victory. The final score was Chicago Cubs 7, New York Giants 2.

Marquard was, of course, disappointed that his streak was broken but said he was relieved that he did not have to worry about it anymore.9

Through 2015, Marquard and Keefe still held the major-league record for the longest winning streak in one season.