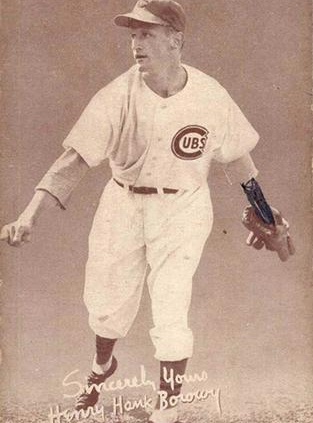 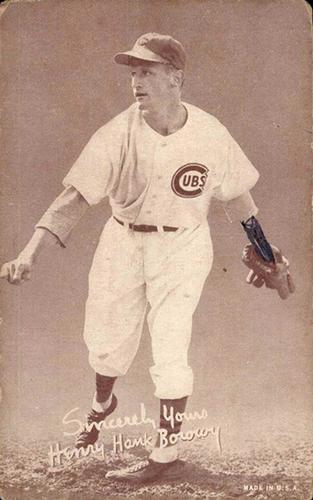 In a time when a pitcher’s ability to finish games was thought to say something about his character, even his masculinity, Hank Borowy was developing a reputation as a man who couldn’t finish what he started.

An All-Star with the New York Yankees, Borowy was considered one of baseball’s best pitchers, but in 1945 the Yankees decided they’d had enough of him. In July they sold him to the Chicago Cubs in a shocking deal that made no sense to anybody. The best defense mercurial Yankees President Larry MacPhail could offer was Borowy’s supposed lack of stamina. “This year he pitched four complete games for us after April, none after June 24. Last season he won only five and lost eight after July 15. In short, he has not been, for the Yankees, a pitcher who could be relied upon when pitching class was needed most.”1 In Chicago, the no-good bum promptly completed his first 10 starts, went 11-2 with a glittering 2.13 ERA, and propelled his new club to the National League pennant.

Borowy’s 1946 season started equally well, but whether it was because the best hitters were back from World War II or because he had lost something, it quickly became apparent that the 30-year-old right-hander wasn’t the same pitcher. In fact, each of his previous two outings had ended in spectacularly catastrophic fashion.

On May 30 Borowy entered the ninth inning with a 6-1 lead over Cincinnati but surrendered four runs as part of a six-run onslaught as the Reds rallied for a dramatic comeback win. In his next start, he took a three-hit shutout and a 6-0 lead into the eighth inning against the New York Giants before allowing three runs in the eighth and one more in the ninth. The Giants maintained their assault after he got the hook and sent the game into extra innings, although Chicago did storm back to pull out a win. Borowy, who came into the season with a career ERA of 2.66 and 64 complete games in 110 starts, was 1-3 with a 4.15 ERA and just one complete game in nine starts as he prepared to face the last-place Philadelphia Phillies on June 10.

Philadelphia starter Al Milnar had his own problems. He too had been an All-Star once but that was much earlier, before he tore up his shoulder, before two years in the US Army. By 1946, the 32-year-old left-hander was barely hanging on. This was his first appearance as a Phillie after the perpetually pitching-poor club purchased him from the St. Louis Browns two weeks earlier.

The Cubs were winners of seven in a row and their offense, though inconsistent, had shown itself capable of some significant outbursts – not the team you wanted to see if you were a pitcher with a job on the line. On this Monday afternoon, Milnar’s worst nightmare came true. In the words of the Chicago Daily News, “[His] stay was short but turbulent.”2

Milnar walked the first two men he faced in the bottom of the first, Eddie Waitkus followed with a single that scored Stan Hack, and Phil Cavarretta tripled in two more runs. Four batters, no outs – and that was it. Dick Mauney came in from the bullpen, only to be greeted by Marv Rickert’s single that made it 4-0. (Immediately after the game, Philadelphia sold Milnar back to the Browns. The Phillies “gave no reason for the action,” probably figuring his line against the Cubs was explanation enough.3 He never appeared in the major leagues again.)

The weather provided a suitable backdrop for what became a surreal game. It was 84 degrees at game time but a late-spring cold front of almost biblical proportions rolled through Wrigley Field in the third inning, sending dust devils swirling across the infield and the temperature plummeting into the 50s. Those gusts, along with some defensive misadventures, gave a further boost to the Cubs. Mauney was pitching well but in the sixth he walked Borowy and later, with two outs, Phillies shortstop Skeeter Newsome booted Don Johnson’s groundball. Waitkus then lofted a lazy fly ball to left field but the tricky wind carried it beyond the reach of Del Ennis. Borowy and Johnson raced home, while Waitkus found himself on second with a gift double. Cavarretta’s single drove in Waitkus for another unearned run and a 7-0 Cubs lead.

That advantage appeared to be insurmountable because Borowy appeared to be unhittable. As he took the mound in the seventh inning, he had not allowed a hit and had retired 13 Phillies in a row. That, however, is when his problems began. He walked the first two batters, and then after two outs, Andy Seminick hit a sharp grounder to third that Hack misplayed. It was ruled an error, and Roy Hughes came in with an unearned run. But Borowy still had a no-hitter going and a 7-1 lead.

Chicago restored the margin to seven runs with a run in the bottom of the seventh, but then Borowy unraveled completely. Emil Verban led off the eighth with a single to right, ending the no-hit bid. Next came a walk to Oscar Judd, an exceptionally good hitting pitcher who was batting for Mauney. Johnny Wyrostek doubled in Verban to trim the lead to 8-2. Hughes’s infield grounder brought home another run. Ron Northey singled in another. Two batters later, Ennis knocked in another. Just like that, it was 8-5.

Charlie Ripple retired the Cubs in short order, and then in the ninth, as the Chicago Tribune put it, “the party popped wide open.”4 With the pesky Verban on second and two away, Borowy had the Phillies down to their final out, but a walk to Wyrostek and a single to center by Hughes cut the lead to 8-6, as Wyrostek made it to third. With that, rookie Russ Meers came in to relieve Borowy.

Right-handed-hitting Lou Novikoff pinch-hit for Northey against the left-handed Meers and beat out a dribbler up the third-base line that scored Wyrostek.5 Philadelphia was within a run. Meers exited for Hi Bithorn, who surrendered a double to Frank McCormick. That hit ended McCormick’s 0-for-14 slump, drove in two runs, and gave the Phillies an improbable lead.

Philadelphia needed three pitchers to subdue a Cubs threat in the bottom of the ninth. With two outs and a man in scoring position by way of a walk and a stolen base, Charley Schanz got pinch-hitter Charlie Gilbert to ground out to second, preserving the 9-8 victory.

The win went to Ripple – his only major-league victory. Meers was tagged with a loss that he didn’t really deserve, but the fingers all pointed toward Borowy. The Chicago Daily News described the defeat as “one of the late inning collapses that are becoming traditional with him,” while the Chicago Tribune labeled it one more troubling case of “the Henry Borowy swoon.”6

Borowy didn’t start another game for almost two weeks. This one must have been tough to put behind him. “You can lose 18-0 or 1-0 and feel that you deserve it, but a defeat like we encountered today I wouldn’t wish on my worst enemy,” Cubs manager Charlie Grimm shuddered. “I’ve never seen anything like it and I hope I’m never part of anything like it again.”7

The author also reviewed the following sources for play-by-play and other information:

The author also would like to thank Jack Zerby for his assistance.

5 As of this writing, the Retrosheet and Baseball-Reference play-by-play accounts state that Wyrostek scored from second base on Novikoff’s single; however, contemporary newspaper accounts indicate he was on third.