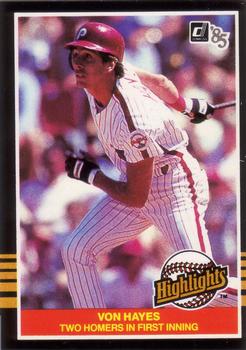 On June 11, 1985, at Philadelphia’s Veterans Stadium, the Phillies pounded the visiting New York Mets, 26-7, before 22,591 fans in a game lasting 3 hours and 21 minutes. The final result was two runs short of the National League record for the most runs scored by a team in a game. The 43 runs scored by both teams were the most in a major-league game in 41 years.1 Philadelphia’s victory set club records for hits (27, including 13 extra-base hits), runs (26), and total bases (45); simultaneously the Mets set records for runs and hits allowed.2

The Philadelphia onslaught began early and runs followed in bunches. The Phillies scored 16 runs before the final out was recorded in the second inning. With injuries to their starting staff, the Mets started reliever Tom Gorman, who lasted a third of an inning and surrendered six earned runs. He was relieved by rookie Calvin Schiraldi, who did even worse. Schiraldi gave up 10 hits and 10 earned runs in 1⅓ innings before Doug Sisk came in and put out the fire. For the Phillies, Juan Samuel had five hits; Rick Schu had four; Glenn Wilson and Bo Diaz had three each; and Mike Schmidt, Garry Maddox, and Dave Rucker had two each. Yet none of these players was the hitting star of this record-setting rout.

Coming into the game, Von Hayes had been in a terrible slump, dropping 75 points from his .356 batting average on May 16th: “I’ve been struggling. … But when I came to the park and saw the lineup, with me leading off, I was kind of embarrassed,” he said after the game. “I’d never led off for the Phillies. Two days ago, when I was taken out of the lineup, I was hitting cleanup. But tonight I thought I might as well make the most of it.”3 Hayes felt that his record-setting performance might have been too much of a good thing: “After those two home runs, I was afraid it would put me in another slump. … I’m not really a home-run hitter and I have to keep myself from swinging for the fences.”4

What made this slugfest especially an aberration for the 1985 season was that both clubs were among the worst offensive teams in the National League. Going into the game, the Phillies were the third worst hitting club at .230 while the Mets were hitting just .222. However, in just this one game Philadelphia raised its team batting average to .238,5 while usually weak-hitting New York pounded Phillies starter and winning pitcher Charles Hudson for 13 hits and seven runs (six earned) in five innings. Wally Backman had three hits and Howard Johnson and Rafael Santana two each.

The Mets responded to their beating in characteristic fashion. Vocal team leader Wally Backman was blunt: “I’ve never been in that kind of game, never, not even in the Little League. … The one word for the whole game is ‘embarrassment.’ It’s a joke, but there’s nothing funny about it. It’s like taking a bunch of 6-year-old kids out there. Manager Davey Johnson was equally direct in his criticism of his team: “As far as I am concerned this better be a rallying cry. … You can either lie down and accept it, or you can get up tomorrow and start to kick some people around.” Mets general manager Frank Cashen summed up his reaction to the historic loss as follows: “I feel as though I have been through World War III.”6

With the game essentially decided in the first inning, Mets fans were in shock and in a state of depression7, alleviated somewhat by the New York announcing team of Bob Murphy and Gary Thorne. Known for his candidness, Murphy opined, “If this were a prizefight, Gary, they’d stop it.” He also underscored the “laugher” nature of the game he was announcing: “You know, Gary, were it not for the first 15 runs, this would be a ballgame.” Yet, it was rookie announcer Gary Thorne in his postgame wrap-up who had the quotation of the day: “Bob, the turning point of the game was the National Anthem.”8

The only actual drama in the game was to bear witness to discover if Philadelphia would tie or break the National League record for runs scored in a game. The Phillies were within two runs of tying the record with two outs in the bottom of the seventh inning. In the eighth the Mets attempted to avoid the embarrassment of a record loss by bringing in ace closer Jesse Orosco, who had been a National League All-Star the previous two seasons. Orosco promptly gave up singles to Rick Schu and Juan Samuel. With the potential record-setting run at the plate, Orosco settled down by striking out Steve Jeltz and getting Glenn Wilson to hit into a 4-6-3 double play. Backman made a nice grab of Wilson’s hard-hit ball, and the Mets prevented the Phillies from attaining the runs-scored record.

In many ways, the game was a fluke. The Mets went on to a second-place finish in the National League East with a 98-64 record (at .605 the third best winning percentage among all major-league teams), while the Phillies finished in fifth place at 75-87, 26 games behind the division-leading St. Louis Cardinals. No one may be able to explain why such games occur, but Phillies star third baseman Mike Schmidt provided his analysis of how and why the game happened: “What would have prevented a game like this … is if Dwight Gooden would have started it.”9

1 The National League record for runs scored by a team in a game is 28, set on July 6, 1929, at Philadelphia’s Baker Bowl. The St. Louis Cardinals defeated Philadelphia, 28-6. The American and major-league records are 30 runs, set on August 22, 2007, at Oriole Park at Camden Yards. The visiting Texas Rangers defeated the Baltimore Orioles, 30-3. “Single Game Scoring,” mlb.com/MLB/history; The New York Giants defeated the Brooklyn Dodgers at the Polo Grounds 26-8 on April 30, 1944.

7 I was at the June 11, 1985, game at Veterans Stadium with two lifelong Mets fans who were attending their first major-league game. I remember little discussion of the game itself; our conversation centered on my friends’ enthusiastic praise of the Philly cheesesteaks, curly fries, and alcoholic beverages at the stadium concession stands.