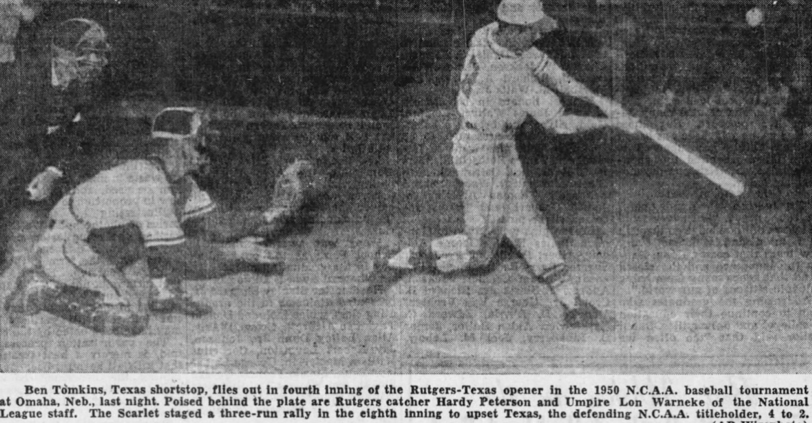 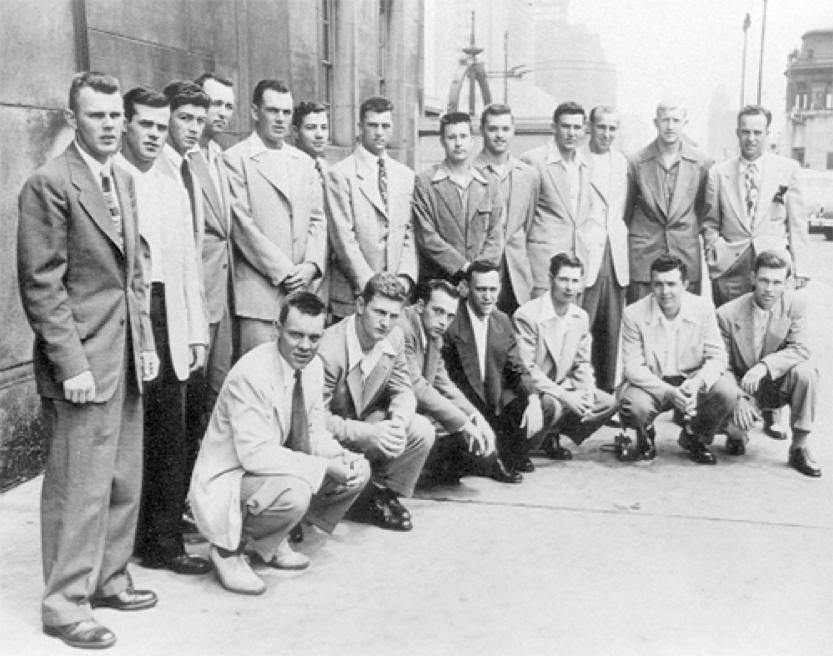 In June 1950 the Rutgers University baseball team made their first visit to the College World Series a memorable one. As numerous sportswriters watched the action in Omaha, Nebraska, they all affirmed Rutgers’ well-deserved bid to the eight-team, double-elimination tournament that determined college baseball’s national champion. Omaha World-Herald sportswriter and CWS official scorer Bob Phipps put it simply: “The New Jersey boys play a fast, heads-up game and look very good.”2

After a two-year stay in Kalamazoo, the CWS moved to Wichita, Kansas, in 1949 before settling in Omaha in 1950. Could it survive the small crowds fully expected for a first-time event in Omaha as well as the bad luck of miserable weather on the first weekend of competition? The sports editor of the hometown Omaha World-Herald noted, “The future fate of the NCAA meet remains in doubt.” He implored Omahans to show up, “even if they have to huddle under blankets.”3

The history books assure us that the College World Series survived and flourished, growing rapidly to become an institution and economic driver in Omaha.4 Take 2022, for example. Eight teams earned their way to Omaha, including Ole Miss, the eventual champion, and a record 366,105 fans watched 15 games.5

Surely there is more to the College World Series than economic impact and records. Every Division I baseball player, supported by family and friends, dreams of a trip to Omaha. One sportswriter called the CWS “a blend of passion, tradition, and unmatched summertime euphoria” with passionate fans bringing an electric atmosphere to baseball games unlike any other.6

Let’s look at that very first game in Omaha, Rutgers (17-4-1) vs. the University of Texas (22-5), played as part of a two-game opening session in front of just over 2,000 fans. The Texas Longhorns were the clear favorites. After all, they were the defending CWS champions, sweeping through the Southwest Conference in 1950 with a 14-1 record and a District VI playoff series win over the University of Arizona. The Rutgers Scarlet fell in the District II playoffs in both 1948 and 1949, but were named as outright District II representative to the 1950 CWS.7

Both teams reflected the major-league backgrounds of their head coaches, Rutgers’ George Case and Texas’s Bibb Falk. Case, a first-year coach and former outfielder with the Washington Senators (10 seasons) and Cleveland Indians (one season), led the major leagues in stolen bases for five consecutive seasons (1939-1943) and was a four-time American League All-Star. Naturally, when he gathered his team in February, the emphasis was on leg conditioning, a necessary ingredient for a running game.8

Falk, an outfielder for the Cleveland Indians and Chicago White Sox from 1920 to 1931, had a .314 career batting average, and an enviable coaching record of nine straight Southwest Conference championships (1946-1954). SABR author Joseph Wancho tells us that Falk was a hard coach to play for, but his players would not trade the experience for anything.9

Case selected Herm Hering (6-0), one of his power hitters, to start for Rutgers, while Falk went with Murray Wall (8-2) for the Longhorns. Wall received All-American honors in 1949 and boasted a 27-5 career record for the defending national champions.10

Texas took the early edge in the second inning. Frank Womack hit a two-out 370-foot home run over the left-field wall with Guss Hrncir aboard for a 2-0 lead. Herring had walked Hrncir, one of seven walks he issued in the game. Over the next seven innings, however, Herring yielded only two hits, a single by catcher Stuart Benson in the fourth and an infield hit by Hrncir in the sixth.11

Could the lead stand for Texas’s All-American pitcher? For six innings, the answer was yes, but Rutgers finally broke through in the seventh. A single by All-American catcher Hardy Peterson, shortstop Ben Tompkins’ error on Tex Maskalevich’s sharp grounder, and an infield grounder gave the Scarlet their first run.12

Rutgers then mixed keen observation, a bit of daring, and outright speed with some good fortune to turn the game in their favor in the eighth inning. Wall retired Ray Van Cleef to open the inning; the Rutgers center fielder had hits in his three previous at-bats. But first baseman Bob Suba walked, and Charles Ruddock singled to left.

A bit of daring? Wall struck out Peterson for the second out, but Rutgers had noticed his overlong windup. With Maskalevich up, the steal sign was turned on! As Suba broke toward home, Ruddock and Monahan took off for third and second.

All were safe on the triple steal and the score was tied, 2-2. Rutgers’ seven stolen bases in one game remains the record for a national collegiate tournament game through 2022.13

Wall was clearly unnerved. He walked Maskalevich after two strikes and Steve Kalapos as well, to give Rutgers a 3-2 lead. Jim Ehrler replaced Wall on the mound, but Hering’s run-scoring single added an insurance run for a 4-2 lead heading to the ninth.

Hering finished the game by retiring the side in order, including grounders back to the mound by the last two batters, Womack and Sigmund Waghalter.

Rutgers had beaten the defending champions in the first College World Series game ever played in Omaha, but the double-elimination tournament was far from being over. In the next round, played in a steady drizzle, Rutgers recovered from a first-inning three-run deficit to beat the University of Wisconsin 5-3 behind Tom Foster’s six-hitter and Van Cleef’s four hits.14

The bats went cold in their next game when Washington State College beat Rutgers 3-1 in 10 innings.15 Rod Keogh limited the Scarlet to only one hit, Jim Monahan’s fourth inning triple, in his pitching duel with Al Willenbrock. A rematch with Texas seemed inevitable.

Meanwhile, Texas and outstanding pitching eliminated both Colorado A&M, 3-1, and Tufts, 7-0. In the latter game, Ehrler returned to the mound as the starter and tossed the first CWS no-hitter.16 Texas next beat previously unbeaten Washington State, 13-1, and Rutgers eliminated Wisconsin, 16-2, a complete-game six-hitter by Hering.

The rematch between Rutgers and Texas for the right to play Washington State for the title was all set. Tom Foster vs. Charlie Gorin. In his account of that game in the Omaha World-Herald, Phipps called it “a pantomime of one of the most famous of all college sayings … I’d die for dear old Rutgers.”17

Texas started hitting in the second inning and didn’t stop, leading 10-0 before Rutgers was finally able to put runs on the board in the fourth inning. Six Rutgers pitchers yielded 15 hits and 13 walks. The hitting stars for Texas included first baseman Kal Segrist, who homered and drove in five runs and Gorin, who helped his own cause with three hits and four RBIs.18 To its credit, Rutgers scored in each of the last three innings, collecting 12 hits for the game but losing 15-9.

Texas successfully defended its first College World Series title with a second one, shutting out Washington State 3-0 behind the pitching of Ehrler and Wall.19 And that success was followed by four more titles for the Longhorns – 1975, 1983, 2002, 2005 – and a record 38 appearances in the College World Series through 2022.20

For the third-place Scarlet, Ray Van Cleef was named the CWS Most Outstanding Player after batting .417 on 10-for-24. He was also named an All-American outfielder by the American Baseball Coaches Association, an honor he received again in 1951.

What would a return to the College World Series be like for any team more than 70 years after that very first game in Omaha? Think of the campus atmosphere on college football Saturday. Add a gathering of family and friends to celebrate a glorious occasion and experiencing the full range of emotions as every game is played. It’s the dream of college baseball players.

The author’s father graduated from Rutgers in 1935. In the early 1960s, he got to know Hardy Peterson and talk some baseball. Peterson – also known as “Pete” during his baseball career – held many positions in the Pittsburgh Pirates organization through 1985 after a stint as a backup catcher (1955-1959). He was the general manager for Pittsburgh’s 1979 World Series champions.

The author graduated from Rutgers in 1966. When he wasn’t studying chemical engineering during his undergraduate days, he was working part-time in the sports information office and broadcasting baseball and basketball play-by-play on WRSU, the college radio station. The research for this essay helped the author rekindle those experiences and bring the magical 1950 Rutgers baseball season to life again. 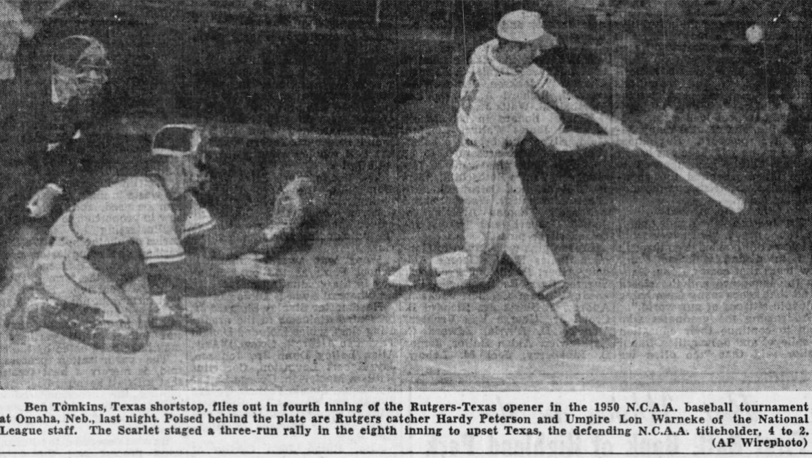 Home-plate umpire Lon Warneke served as a National League umpire (1949-1955) after a major-league career as a pitcher for 15 seasons (1930-1945). Warneke, a five-time All-Star, pitched for the Chicago Cubs and St. Louis Cardinals and amassed a stellar record: 192-121, 3.18 ERA. The batter, Texas shortstop Ben Tompkins, spent seven seasons (1953-1959) in the Philadelphia Phillies minor-league system, rising to play for their Triple-A Miami team in the International League. He never played in the major leagues.

This essay was fact-checked by Evan Katz and copy-edited by Len Levin.

1 “Rutgers Traditional Songs,” rutgers.edu/about/traditional-songs. The song “Nobody Ever Died for Dear Old Rutgers” from the 1947 musical High Button Shoes, set in New Brunswick, New Jersey, refers to Rutgers legend Frank “Pop” Grant, who broke his leg in an 1892 football game against Princeton and was rumored to say, “I’d die for dear old Rutgers” as he was carried off the field.

4 W.C. Madden and Patrick J. Stewart, The College World Series: A Baseball History, 1947-2003 (Jefferson, North Carolina: McFarland & Company, 2004), 19. “The NCAA considered the Series [1950] a success despite a disappointing attendance of 17,185. Rain and temperatures in the 50s were to blame for the poor turnout. Organizers had hoped for an attendance of 30,000 and the poor showing resulted in the Series losing $7,500. Years later, a study (cwsomaha.com/economic-impact/) by Creighton University economists Ernie Goss and Scott Strain documented the economic impact of the College World Series in Omaha: $88.3 million and supporting more than 1,100 year-round jobs in 2019.

7 Reading a late-season issue of the campus newspaper, Rutgers Targum, may have scared a few Rutgers baseball fans. Rutgers (14-2-1) was relying heavily on two pitching aces, Herman Hering and Tom Foster. “The NCAA selecting committee for District II announced Wednesday that depth of pitching staffs as well as season’s records would be considered when sending out invitations, since the teams competing in the tourney would have to play five games in eight days.” (Tek Talmont, “Lack of Depth on Mound May Cost Nine Playoff Bid,” Rutgers Targum, May 12, 1950: 3.) Perhaps two wins each against Lafayette (15-9) and Virginia (17-6) and a 14-1 record in midseason convinced the selectors that Rutgers deserved a CWS berth without a playoff round.

19 The losing pitcher for Washington State was Gene Conley. Conley is the only athlete to own championships in both major-league baseball and the NBA. He pitched for the World Series champion Milwaukee Braves in 1957 and was a member of three NBA championship teams with the Boston Celtics.

20 George Case coached Rutgers through 1960 and the Scarlet played in the NCAA baseball tournament 14 times (through 2022) since their lone CWS appearance in 1950.