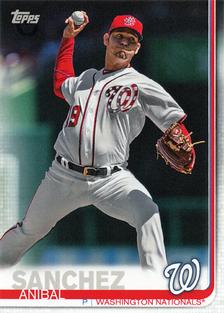 It was a beautiful Father’s Day afternoon in DC: sunny and 84 degrees. To celebrate the day, several players’ kids threw out ceremonial first pitches.1 Both teams and the umpires wore their special Father’s Day light-blue trimmed uniforms with light blue caps. Some players wore blue plaid compression sleeves. The day, and the special uniforms, were dedicated to prostate cancer awareness.2

The Arizona Diamondbacks were 38-34 and second in the NL West, but 9½ games behind the first-place Los Angeles Dodgers. They had taken two of the first three games of the four-game series. The Nationals were 32-38, fourth in the NL East, 8½ games back of Atlanta. Since bottoming out at 19-31 on May 23, they had won 13 of their last 20.

Aníbal Sánchez (2-6, 3.92 ERA) had turned his year around after an 0-6 start and a short stay on the Injured List. In celebration of Father’s Day, Sánchez’s wife and children brought him the game ball on the mound. Kurt Suzuki was catching Sánchez, as he had when they played for Atlanta the previous year.3 Jarrod Dyson grounded to Sánchez for the first out, but Ketel Marte homered over the out-of-town scoreboard in right to give Arizona an early lead. That was all Sánchez allowed, though: Eduardo Escobar struck out and Christian Walker grounded to third.

Archie Bradley (4.26 ERA) made what turned out to be his only start of the year for the Diamondbacks. He hadn’t started a game since 2016, having pitched out of Arizona’s bullpen since then. It wasn’t unusual for him to pitch two, or even three, innings in relief.4

Bradley struck out Trea Turner, but Adam Eaton and Anthony Rendon followed with singles. Juan Soto walked to load the bases. That brought Howie Kendrick to the plate — an unfavorable matchup for Bradley with the bases loaded. Not only was Kendrick on a hot streak (20-for-50 in his last 16 games), he was 7-for-14 against Bradley in his career. He singled to center on the first pitch, tying the game.

Diamondbacks pitching coach Mike Butcher visited Bradley on the mound. Matt Adams popped up to third, triggering the infield-fly rule and suggesting that Butcher’s visit had been beneficial. But Bradley was not so lucky with Suzuki, who looped one just over the shortstop, scoring two. Víctor Robles grounded into a force out, but the Nationals led, 3-1.

Sánchez had a quick top of the second. He fielded Ildemaro Vargas’s comebacker and tagged him out in the baseline. Tim Locastro flied out. Nick Ahmed lined out.

After Sánchez struck out to start the home half of the second, Turner walked. With Eaton batting, Arizona suspected Turner was stealing and tried a pitchout — but he didn’t go on that pitch. Two pitches later Turner did steal, putting himself in position to score Washington’s fourth run of the game on Eaton’s single up the middle.

That ended Bradley’s day. He was replaced by Zack Godley, who was a regular starter for Arizona through April but then moved to long relief. He needed only one pitch to get out of the inning: Rendon grounded into a 4-3 double play.

Catcher Caleb Joseph was the first batter in the third. He was on his second call-up this year for Arizona, this time after Alex Avila injured his calf in the first game of the series.5 He and Godley flied out. Dyson grounded up the middle, with the ball eluding Sánchez’s glove for a single. Marte singled over Turner’s leaping attempt, putting runners on first and second, but Escobar lined right into Turner’s glove to end the threat.

Soto opened the bottom of the third by singling between the shifted fielders. Kendrick singled. Adams worked the count full, then homered into the seats in right-center field. Per the Nationals’ 2019 tradition, Adams danced in the dugout, then received a hug from Gerardo Parra. The Nationals led, 7-1.

Sánchez showed off his pitch variety in the top of the fourth by striking out Walker with a 67-MPH changeup. He had some difficulty after that: Vargas’s single, Locastro’s hustle double, and Ahmed’s fly out to center scored one run. Sánchez plunked Joseph with a 61-MPH pitch. With runners on first and third, Godley popped out to second baseman Kendrick to end the inning.

Godley had a relatively easy fourth. Eaton singled into center for his third hit of the day, but Rendon popped out, and, as Soto was striking out, Joseph caught Eaton stealing second.

Sánchez needed only 10 pitches for the top of the fifth. Dyson bounced to Sánchez, who made the easy toss to first. Marte grounded to first and Escobar flied out.

The Nationals added to their lead in the bottom of the fifth on Suzuki’s two-out solo homer off Godley. Marte ended the inning by catching Robles’ pop fly — while narrowly avoiding a collision with Locastro.

After some mound repairs, Sánchez pitched his final inning of the game. He allowed a single to Walker and hit Locastro, but no one scored. That was the 11th time in 2019 that Locastro was plunked — he definitely crowded the plate.6 At 98 pitches, that was it for Sánchez, leaving with an 8-2 lead and in line for his 100th career win in his 14th major-league season. Teammate Stephen Strasburg had just passed that milestone two weeks earlier.7

Parra, seen earlier celebrating Adams’s home run, pinch-hit for Sánchez to begin the bottom of the sixth, but struck out. He was in a bit of a slump, falling to .115 for June after that strikeout. His change of walk-up music (and change of fortune) was three days in the future.

Washington’s barrage of Godley was not done. Eaton worked a two-out walk. Rendon hit a two-run homer into the visitors bullpen, for the third home run off Godley. Hitting double-digit runs for the eighth time so far in 2019, the Nationals led 10-2.

The Nationals turned matters over to their bullpen in the seventh. Tanner Rainey faced pinch-hitter Kevin Cron, who grounded out to third. Dyson swung and missed at strike three, but the ball hit Suzuki in the neck. Suzuki regrouped to throw to first; the throw hit Dyson, but he was called out for running in the baseline. Yan Gomes took over the catching duties. (The injury wasn’t serious: Suzuki was back in three days.) Marte doubled and scored on Escobar’s one-hop single to right. Walker grounded to short to end the inning with the score 10-3, Nationals.

All Arizona reliever Stefan Crichton allowed in the home half of the seventh was a walk to Kendrick. Vargas hit reliever Javy Guerra’s first pitch of the top of the eighth for a single, but that was all Guerra allowed.

The Nationals eliminated any remaining doubt by putting the game out of reach in the eighth. After Crichton struck out the first two batters, a walk, a single, and a hit batter loaded the bases. Eaton scored easily on Kendrick’s base hit into right, leaving the bases still loaded.

Adams unloaded them with a grand slam eight rows into the second deck, making it 15-3. The Nationals had scored 10 of their runs after two outs. There was much dancing in the dugout and a hug from Parra.

Conceding the game, Arizona moved Joseph from catching to pitching. Gomes grounded out to finally end the inning. Joseph had pitched before for Arizona: a full inning in a 9-1 loss to the Cubs on April 27. His 0.00 ERA remained intact.

Tony Sipp took the mound to close out the game. He got two quick outs, then went to a 2-and-2 count on Marte. The crowd stood, anticipating the last out, but Marte walked. Carson Kelly (who took over the catching when Joseph switched to pitching) flared to center, scoring Marte (who had taken second on defensive indifference).

Walker grounded to Adrián Sanchez, who had replaced Rendon at third. Sanchez bobbled the ball, again postponing the final out. Vargas was next up. The crowd was ready to cheer a Nationals victory, so now they were cheering each strike. Vargas’s single drove in Kelly: 15-5, Nationals. Locastro’s groundout finally ended the game.

Sánchez finished the regular season at 11-8 (3.85 ERA) after that 0-6 start. He turned in a solid performance in Game Three of the NLDS before the Dodgers rallied against the Nationals’ bullpen for a 10-4 win. He struggled in Game Three of the World Series, taking the loss in the Astros’ 4-1 win. But his postseason masterpiece was Game One of the NLCS. Sánchez was four outs from a no-hitter — echoing his six hitless innings in the ALCS six years earlier for the Tigers — and led Washington to a 2-0 win over St. Louis, spearheading the Nationals’ four-game series sweep.

In addition to the sources in the Notes, Retrosheet and Baseball reference, the author watched the recorded game at MLB.com.

1 “Throw” was an overstatement for some of the kids: Adam Eaton’s younger son managed to roll a ball a few inches.

2 The game-worn caps, cleats, etc., were often auctioned off to support the cause. The TV announcers also encouraged cancer screenings throughout the broadcast.

4 He had been given a spot start since he had been throwing well recently. Richard Morin, “Archie Bradley Named Starting Pitcher for Diamondbacks’ Series Finale vs. Nationals,” AZCentral, June 15, 2019, azcentral.com/story/sports/mlb/diamondbacks/2019/06/15/archie-bradley-named-starting-pitcher-diamondbacks-series-finale-vs-nationals/1468819001/. After this start, Bradley returned to the bullpen for the rest of the season. The move was probably to his relief: He added almost a run to his ERA in this game (4.26 to 5.18). By the end of the year he was closing regularly for Arizona and had worked his ERA back down to 3.52.

6 Locastro ended the year fourth in the major leagues in HBP with 22.