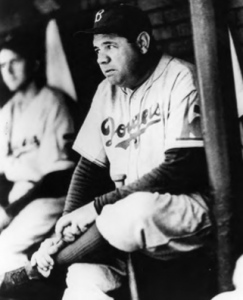 Fans at Ebbets Field cheered when Babe Ruth — decked out in Dodger blue — trotted to the third-base coach’s box on Sunday, June 19, 1938, in the first game of a doubleheader. Baseball’s home-run king had agreed the previous day to join the Brooklyn staff. Dodgers general manager Larry MacPhail signed him to a $15,000 deal for the remainder of the season.

Ruth, who retired as a player early in the 1935 season, said his golf game could wait. “Y’know, I didn’t realize how much I’d miss this until I got this job,” Ruth said. “Of course, golf is great. This will sure knock blazes out of my game, but it can’t match this stuff.”1

Coach Ruth took a round of batting practice before the game began. Fans roared with every swing. Afterward, the Sultan of Swat slapped his prodigious belly and smiled. “Gosh, it sure is good to be back,” he told reporters. “But I’m not in shape. Stood up there and hit for five minutes and felt like I’d been doing it all week.”2

Rumors swirled that the Dodgers wanted Ruth to eventually replace manager Burleigh Grimes, the former pitcher who won 270 games in a 19-year mound career, much of it spent with Brooklyn. Grimes compiled a 62-91 won-lost mark in 1937 as a rookie skipper. On the morning of Ruth’s first day as coach, Brooklyn’s record stood at 22-31, good for seventh place in the National League. The Babe dismissed any idea that he coveted Grimes’s job.

“Right this minute, I haven’t a thought about a manager’s position,” Ruth said. “I signed as coach for the Dodgers for the rest of this season. I don’t even know what’s going to happen next year.”3 Furthermore, he said, “Burleigh Grimes is the manager. Sure, I’d like to be a manger, here or somewhere else, but I guess I gotta wait awhile.”4

Ruth settled into the coach’s box on a warm day in Flatbush with 28,000 fans at the ballpark. Tot Pressnell, a 31-year-old rookie right-hander, started for Brooklyn against 30-year-old Larry French, a left-hander in his 10th big-league season. Pressnell featured a knuckleball, which he developed while toiling several years in the minor leagues. French, a three-time 18-game winner, threw a screwball.

Chicago jumped on top with two runs in the opening frame. Stan Hack singled and advanced to second base on Phil Cavarretta’s sacrifice bunt. Carl Reynolds followed by knocking a two-run homer, his first round-tripper of the year.

The game stayed 2-0 until the Dodgers put together a fifth-inning rally. French walked Pressnell and loaded the bases by allowing singles to Kiki Cuyler and Buddy Hassett. Hard-hitting catcher Babe Phelps knocked a two-run base hit over second baseman Billy Herman’s head. That ended the day for French, who gave way to veteran relief pitcher Jack Russell. It did not stop the Brooklyn scoring. Dolph Camilli ripped an RBI single, bringing home Hassett and giving the Dodgers a 3-2 lead.

Brooklyn added two more runs in the sixth inning. Pressnell led off by hitting a single, once again helping his own cause. Cuyler doubled to center, putting runners on second and third. Johnny Hudson, batting for Pete Coscarart, rapped a comebacker to Russell, who froze the runners and threw to first baseman Ripper Collins for the out. He then left the game in favor of reliever Bob Logan.

Hassett flied out to left field off Logan, but not deep enough for Pressnell to score. With Phelps up, Logan unleashed a pitch that slipped through catcher Gabby Harnett’s legs. Pressnell sprinted home on the passed ball. Phelps whacked a two-out hit to the right-field wall, scoring Cuyler. The Dodgers now led 5-2.

Reliever Al Epperly started the seventh inning for Chicago. Camilli lined a double to right field against the new pitcher and scored on Leo Durocher’s single. Brooklyn and Pressnell kept the Cubs scoreless after that two-run first and won 6-2. Pressnell threw a complete game and evened his won-loss record at 5-5. He gave up nine hits, struck out three, and walked two. French, who lasted just 4⅓ innings. dropped to 4-9. He allowed six hits and five walks, while not fanning a single Brooklyn batter. The Dodgers advanced to 23-31, while the Cubs dropped to 31-25.

Mostly, Ruth clapped and cheered on the Brooklyn players. He did some real coaching in the fifth inning. When Pressnell rounded third, a “wild throw”5 skipped past Cubs first baseman Collins and crashed into the grandstand. The ball, though, quickly bounced back. “As it did,” according to a Chicago Tribune reporter, “Ruth wheeled and held Pressnell at third. He saved a run, for Collins’ throw to Gabby Hartnett at the plate was fast and true.”6

In the weeks after his coaching debut (Chicago won the second game of the June 19 twin bill, 4-3), Ruth kept taking pregame swings in the batting cage, and another rumor began circulating. Maybe the Babe could swat some homers in a real game. Grimes, though, shot down any talk of a Ruthian comeback. “He can’t see,” said the 44-year-old former spitballer, retired as a player since 1934. “If he can hit, I can still pitch.” Years later, Grimes said, “Sometimes, he couldn’t see pitches. … I knew he had trouble when I threw batting practice. So, we used to have Merv Shea, a catcher, throw to him. Shea just sort of flipped his arm when he threw, and it was easy to follow the ball. But you put him in a game? He might have been killed.”7

Baseball’s Sultan of Swat also signed autographs and made numerous visits to hospitals and orphanages. He played in 10 exhibition games, mostly in small towns. Some young pitchers wanted nothing more than to strike out a baseball legend, even a 43-year-old retired one with a big gut and bad eyesight. “It’s a wonder I didn’t get skulled,” Ruth wrote in his autobiography, The Babe Ruth Story, essentially agreeing with Grimes’s comment.8

Ruth coached both third base and first base. Most players liked the fabled slugger, who cracked jokes, told stories, and called left-handed pitcher Vito Tamulis “Tomatoes.” “When he spoke, everyone listened, all but Durocher,” Grimes said many years later.9 The acrimony between Ruth and Durocher went back many years. The two were teammates for a few seasons with the Yankees when Ruth called the young, light-hitting Durocher “the All-American out.” Leo, in turn, annoyed some Yankee veterans with his nonstop yapping. When the two were reunited in Brooklyn, they nearly came to blows. Durocher screamed that Ruth couldn’t remember the signs that were given from the dugout. The Babe took offense. Ruth biographer Robert Creamer shrugged off the charge. Ruth could relay signs, Creamer wrote. Simply put, “He (Ruth) tended to ignore” them.10 The Dodgers trudged through the 1938 season and finished 69-80, in seventh place and 18½ games out of first place. As many expected, MacPhail fired Grimes in October and hired Durocher as the new skipper. That move pretty much ended Ruth’s coaching tenure in Flatbush. “I knew I wouldn’t return to the Dodgers,” he wrote in his autobiography.11

The Babe went back to playing golf, drinking, and living life large. Leigh Montville wrote a biography of Ruth, The Big Bam: The Life and Times of Babe Ruth, published in 2006. He devoted just a small section to the retired home-run king’s managerial ambitions. Why didn’t any team take a chance and sign Ruth as a manager? Maybe Ruth’s wild lifestyle during his younger days still bothered some front-office people, Montville supposed. Maybe some owners thought Ruth couldn’t handle the mental side of the job. He forgot people’s names all the time, Montville pointed out. Or maybe Ruth commanded too large a presence. Ego-laden owners might not like that. Anyway, Ruth didn’t hustle to get a job, Montville wrote, and he didn’t take a minor-league post. “Managing baseball, unlike playing baseball, is a political job,” Montville wrote. “He was not a political person. He was Babe Ruth, dammit. … He waited. The call never came.”12

Creamer argued that Ruth boasted baseball smarts, players respected him, and he talked a good, colorful game to reporters. “He may not have been a success,” Creamer wrote. “Most managers are not. But he should have been given a chance.”13

In addition to the sources cited in the Notes, the author also consulted baseball-reference.com.