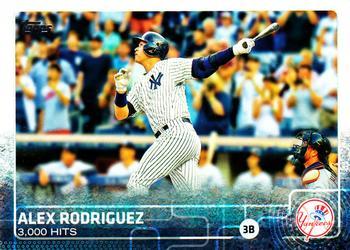 SABR biographer Alan Cohen argues, “The mention of Alex Rodríguez conjures up images favorable and unfavorable. For almost three decades, his image has been in the public eye, often for all the wrong reasons.”1

In spite of the controversy, A-Rod has transcended baseball and landed on the short list of celebrities who are known by a single name. His fame’s foundation, of course, was a 22-year major-league career with a nearly unrivaled list of accomplishments: three MVP Awards, 14 All-Star selections, a World Series championship, more home runs than all but three players in major-league history, and a place in baseball’s 3,000-hit club.

Rodríguez came up with the Seattle Mariners as an 18-year-old in 1994, just over a year after Seattle selected him first overall in baseball’s June draft. His seven productive seasons in the Northwest included a batting title in 1996, as well as four All-Star selections and four Silver Slugger Awards. He became a free agent after the 2000 season, and famously signed a record 10-year, $252 million contract with the Texas Rangers in 2001.

The Rangers got their money’s worth; A-Rod pounded 156 homers over the next three years (leading the league all three years) and won the American League MVP Award in 2003. When the Yankees needed a third baseman for the 2004 season, the Rangers traded Rodríguez to New York in exchange for cash and Alfonso Soriano. A-Rod spent the rest of his career with the Yankees, winning two more MVP Awards in 2005 and 2007 and his only World Series championship in 2009.

It took Rodríguez 865 more games to get to 2,000 hits. He reached that milestone with a three-run homer on July 21, 2006, against the Blue Jays in Toronto, just before his 31st birthday. The blast marked A-Rod as the youngest player in major-league history to put 450 balls over the fence, and the eighth player to reach 2,000 safeties before turning 31.2

Rodríguez finished the 2013 season with 2,939 hits, putting him 61 shy of the 3,000-hit milestone. But the chase was put on hold because Major League Baseball suspended him for using performance-enhancing substances. A-Rod missed the entire 2014 season due to the suspension. The Yankees finished 84-78, missing the postseason for the second season in a row and only the third time since 1995.

Back in the Yankee lineup for the start of the 2015 season, Rodríguez collected 16 hits in April and 31 in May. This left him 14 hits short of the milestone entering June. By June 15 he had added nine more hits, for a total of 2,995.

This virtually ensured that his 3,000th hit would happen at Yankee Stadium, since the Yankees were starting an eight-game homestand on June 17. A-Rod managed two hits on the 17th, then two more on June 18, which afforded him his first opportunity to reach 3,000 hits in the eighth inning. A four-pitch walk left him sitting on 2,999, entering the game against Detroit on June 19.

Going into the Friday night game, the Yankees owned a 36-30 record and were just a game behind the Tampa Bay Rays in the AL East race. The Tigers, AL Central champions in 2014, were 5½ games behind the Kansas City Royals with a 34-32 mark.

Right hander Adam Warren, who had mostly been used in relief by the Yankees the previous two seasons, was starting his 13th game of 2015 and owned a 4-4 record. The Tigers countered with Justin Verlander, four seasons removed from winning the American League MVP and Cy Young Award in 2011. Verlander, who had missed the first two months of the season with a latissimus dorsi muscle strain, was making just his second start of the season.3 He did not get a decision in his first outing and had no record before the Yankee start.

Rodríguez was batting third as the Yankees’ designated hitter. The 44,588 fans who attended the game hoped to witness history.

After giving up a single to center fielder Anthony Gose on the first pitch of the game, Warren struck out the next two batters, and Gose was caught stealing to end the top of the first.

In the home half of the inning, Verlander, like Warren, allowed the leadoff hitter, Brett Gardner, to reach, but he erased Gardner by picking him off first base. A fly-ball out brought A-Rod to the plate for his second opportunity to attain the milestone.

He didn’t waste any time. Rodríguez sent Verlander’s first pitch over the right-center-field wall for a home run that put the Yankees ahead 1-0.

Rodriguez trotted around the diamond with a grin on his face, and then met his teammates in front of the Yankees dugout. Their celebration took the form of high fives and hugs. A-Rod took a curtain call by coming out of the dugout and raising both arms to the sky in response to the ovation from the crowd.4

The Tigers loaded the bases with one out in the top of the second. Catcher Bryan Holaday drove in two runs with a single, giving Detroit a 2-1 lead, but Warren escaped further damage. Didi Gregorius, playing shortstop for the Yankees, blasted another homer off Verlander in the bottom of the inning, so the teams entered the third inning tied, 2-2.

Both hurlers settled down and pitched perfect ball, not allowing any baserunners, until the bottom of the fifth, when the Yankees regained the lead on their third homer off Verlander. Gardner took him deep with a runner on first to give the Yankees a 4-2 lead.

With Verlander still on the mound, the Yankees broke the game open in the seventh. Two infield hits put runners on the corners with one out. A wild pitch with A-Rod batting scored another run before Verlander retired the slugger on a groundout to third.

Tigers manager Brad Ausmus brought in left-hander Tom Gorzelanny to face first baseman Mark Teixeira; Teixeira singled in another run to make the score 6-2. Gardner’s single drove home the Yankees’ seventh and final run of the game in the eighth.

After the game, Rodríguez reflected on the journey to his 3000th hit. “A year ago today I didn’t know if this day would ever come,” he said. “There were some really dark days. I got to tell you I’m really grateful for Joe Girardi [the Yankee manager]. He’s given me every opportunity. I’m grateful. I’m extremely appreciative to the Yankees for giving me an opportunity to put the uniform back on.”

“We’re very excited for him, happy for him. The guys, you could see the emotion,” Girardi replied.

Asked about the pitch he hit to reach the milestone, Rodríguez said, “I was just thinking be aggressive, get a good pitch to hit and not try to do too much.”

Discussing the offering from his perspective, Verlander said, “I wasn’t really sure if he’d be swinging early or not. It’s a pitch that historically I know that he likes, outside, on the black, but it was just a hair up. I didn’t miss by much; he’s just a really good hitter. In retrospect, I think he was trying to get 3,000 out of the way.”5

Many thanks to John Fredland for his careful review of the first draft of this article. His comments significantly improved the final result. The article was fact-checked by Kevin Larkin and copy-edited by Len Levin.

I was lucky to see the future star, Alex Rodríguez, play when he was still in the minors. I saw him play for the Triple-A Tacoma Rainiers in 1995. He was clearly the best player on the field.