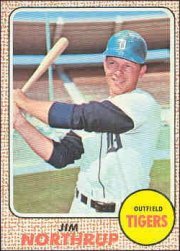 On June 24, 1968, the Detroit Tigers routed the Cleveland Indians, led by Jim Northrup’s two grand slams, in a 14-3 victory. The crowd of 12,808 at Cleveland Stadium witnessed a piece of history: Northrup became just the sixth major leaguer to hit two bases-loaded home runs in a game. Afterward, Northrup observed, “Hitting two grand slams in a single MLB game is an outstanding feat. It’s rarer than a perfect game.”1 This is indeed true. As of 2015, there have been 23 pitchers who have pitched perfect games but only 13 batters who have hit two grand slams in a game.

The Tigers jumped out to a 2-0 lead in the top of the first. After Indians pitcher Mike Paul walked Dick McAuliffe and Dick Tracewski, Mickey Stanley’s bunt moved the runners up, and Bill Freehan drove them in with a single. Willie Horton was intentionally walked and Don Wert drew a free pass. Northrup missed an early chance to slug a grand slam, when he came to the plate with the bases loaded and struck out. In the bottom of the inning the Indians got a run back when Jimmie Hall doubled with two outs and came home on a Lee Maye single to left.

Detroit added a run in the top of the fourth on a solo home run by Jim Price. Cleveland responded in the bottom of the inning with a double by Maye and a single by Duke Sims, again trimming the Tigers’ lead to one run.

In the top of the fifth the Tigers broke loose. Paul walked the leadoff batter, Stanley, and was pulled for reliever Eddie Fisher. In his four innings of work, Paul had allowed only a single and Price’s home run, but he walked six. Fisher was not the answer, though. Freehan doubled and Horton got his second intentional pass of the game to load the bases. (In his first three plate appearances, Horton had three walks.) Wert struck out and Northrup brought his lumber to bear, hitting the first pitch he saw over the fence. Price doubled, Denny McLain singled to left, and manager Alvin Dark pulled the plug on Fisher, who had given up four hits and a walk. He allowed an inherited runner to score and was charged with five earned runs. Off reliever Hal Kurtz, Price scored on a grounder by McAuliffe and McLain came home on a single by Tracewski .

McLain struck out the side in the bottom of the fifth and the Tigers still had momentum. Kurtz hit Freehan with a pitch and gave up a double to Horton. Wayne Comer ran for Horton. Kurtz hit Wert in the head with a pitch, and Kurtz’s fastball shattering Wert’s helmet. (Wert was taken to a hospital for examination and was later released.) Ray Oyler ran for Wert, and Billy Rohr came in to pitch for Cleveland. For the third time, Northrup found himself at the plate with the bases loaded. He sent Rohr’s first pitch over the fence for a second grand slam, giving the Tigers a 13-2 lead. Detroit added another run on a walk, a groundout, and a single by McAuliffe. Cleveland got one final tally in the bottom of the eighth on a triple by Billy Harris and a sacrifice fly by Russ Snyder.

With the two grand slams, Northrup had eight runs batted in, setting a team record for RBIs in a game. Five years later, on July 11, 1973, he tied the RBI record in a game against the Texas Rangers.2 Northrup was the third batter in the Two-Grand-Slam Club to accomplish the feat in successive innings (Baltimore’s Jim Gentile had also homered on consecutive pitches he saw in successive innings on May 9, 1961, and the Orioles’ Frank Robinson had done so on June 26, 1970).3

Denny McLain earned his 13th victory of the season (well before the All-Star break) in pitching a complete game. The 24-year-old right-hander went on to win 31 games in the 1968 season, becoming the last pitcher to win more than 30 games (as of 2015), and the first since Dizzy Dean in 1934. On the other side, Indians first baseman Willie Smith came in to pitch the final three innings for Cleveland. Smith gave up one hit and one walk but did not allow a run, as the fifth pitcher of the day for the Indians. In allowing 14 runs, Cleveland pitching had given up only 11 hits, but three of them were home runs, and the Cleveland hurlers walked nine.

2. Five days after the Cleveland game, Northrup connected again for a grand slam, against Cisco Carlos of the Chicago White Sox in a 5-2 victory at Tigers Stadium. That gave the Detroit right fielder three grand slams in a week, a major-league record.8 It also tied him with Rudy York for the most grand slams in a month. Former Tiger York hit two grand slams in a game on July 27, 1946, while playing for the Boston Red Sox.9

Bob Hurte, “Where Have You Gone Tony Cloninger? Baseball Turns Its Lonely Eyes To You, http://seamheads.com/2012/09/16/where-have-you-gone-tony-cloninger-baseb....

1 Bob Hurte, “Where Have You Gone Tony Cloninger? Baseball Turns Its Lonely Eyes To You, http://seamheads.com/2012/09/16/where-have-you-gone-tony-cloninger-baseb....