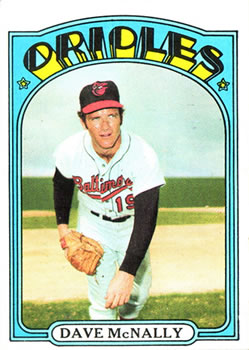 The 1972 AL East race was beginning to take shape when the Detroit Tigers visited Baltimore’s Memorial Stadium in late June for a three-game series with the Orioles. Through 56 games, Detroit was in front of the AL East with a one-game lead over the second-place Baltimore. The season had got off to a later-than-usual start because of friction between the owners and players that resulted in the major leagues’ first player strike.1 The Tigers had begun their season on April 15, and the Orioles opened up on April 16.

Rain washed away the Friday-night opener and two games were played on Saturday night, June 24, under threatening skies. The twin bill was watched by 28,190 fans and the pitching matchups foretold that there would not be much in the way of offense. The teams combined for seven runs in splitting the two games, and the Tigers maintained their one-game lead over the Orioles.

In the opener, won by Baltimore 3-1, the Orioles’ Dave McNally was up against fellow southpaw Mickey Lolich of the Tigers. They were the respective aces of their teams. McNally was coming off four consecutive 20-win seasons. Lolich the season before had led the American League in wins (25), complete games (29), and strikeouts (308). McNally’s first pitch came at 5:35 P.M.

The Tigers took the early lead. Veteran Tony Taylor singled to open the game. With one out, Al Kaline, who had first played at Memorial Stadium as a high-school sophomore in 1951, walked. Runners were on first and second with two outs when Willie Horton singled to short left field and an adventure of sorts ensued. Taylor navigated the wet track, slipping as he rounded third base, and continued home as Baltimore shortstop Mark Belanger took a tumble while fielding the ball in the outfield.

The Orioles knotted the score in the bottom of the inning. After Merv Rettenmund walked, Belanger laid down a bunt. As Detroit catcher Bill Freehan chased the ball down on the wet infield surface, Belanger outran the ball and arrived safely at first base. A walk to Don Baylor filled the bases with one out, and Brooks Robinson brought Rettenmund from third with a fly ball to center field. Lolich worked his way out of the inning, striking out Bobby Grich.

Lolich yielded two solo home runs as Baltimore pulled away to a 3-1 lead. Andy Etchebarren homered in the second inning with one out, his first home run of the season, for the eventual game-winner, and Paul Blair completed the scoring with a blast with one out in the eighth inning. Those two homers were among the 29 that Lolich gave up in 1972 to lead the American League.

“He’s got some kind of guts. Even I tried to rub out the soreness in between innings. But nothing really worked. He just kept going out there and finessing them.” – Orioles manager Earl Weaver referring to the effort of Dave McNally2

“I didn’t have a thing after the second inning – nothing. I couldn’t throw anything. No fastball. No curve. Nothing. I just threw the ball to the plate and hoped they wouldn’t hit it.” – Dave McNally, July 24, 19723

For the Orioles, starter Dave McNally pitched much of the game in pain. He had pulled a muscle in his back while pitching to Tony Taylor to record the final out in the second inning, and between innings for the duration of his time in the game he was tended to by the Orioles trainer, Ralph Falvon.

The skies opened up to the point where play was suspended for 22 minutes after the end of the sixth inning. When play resumed, Baltimore manager Earl Weaver removed the suffering McNally from the game. McNally had allowed only three hits in the four innings he pitched after sustaining the injury. The closest the Tigers got to mounting a rally was in the fifth inning when singles by Taylor and Kaline put runners on the corners with two outs. That threat was snuffed out when Freehan grounded out to second base.

Rookie pitcher Roric Harrison entered the game in the seventh inning and allowed only one hit during the final three innings to pick up his first career save. McNally earned the win, the 143rd of his career. Lolich pitched the entire game for the Tigers and took the loss, bringing his season’s record to 11-5.

The nightcap, which began at 8:42, was a matchup between Joe Coleman of Detroit and Mike Cuellar of Baltimore, and it was another game with little in the way of scoring. Not a runner crossed the plate in the first six innings. In those six innings, Cuellar allowed only two hits, both doubles. Mickey Stanley doubled with two out in the second inning and was stranded when Cuellar struck out Aurelio Rodriguez. Al Kaline led off the fourth inning with a double for the Tigers but was left stranded when Cuellar retired the next three batters.

With one out in the seventh, Bill Freehan singled for Detroit and advanced to second on a swinging bunt by Ike Brown. An RBI single by Stanley gave the Tigers a 1-0 lead. Coleman, who had allowed a harmless leadoff single to Don Buford in the first inning, didn’t allow his second hit until Paul Blair singled in the eighth inning. (He was subsequently caught stealing.) The Orioles tied it in the bottom of the ninth when Coleman had a short control lapse. With two outs he walked Rettenmund on four pitches. Terry Crowley’s bloop double down the left-field line eluded Wayne Comer and allowed Rettenmund to score the tying run.

The game went into extra innings. By the 12th inning the hands on the clock made it apparent that the midnight curfew could cause a stoppage in play if the game weren’t decided within the next two innings. Doyle Alexander had relieved Cuellar in the ninth inning and was in his fourth inning of relief.

“At 37, (Norm) Cash is not the world’s fastest human. In fact, with his red neck and face working on a mouthful of chew, he looks more like an enraged turtle.” — Charles Flowers, Detroit Free Press, June 25, 19724

Norm Cash led off the top of the 12th inning for Detroit with a single. The next batter, Mickey Stanley, bunted to advance Cash. Alexander fielded the bunt and unleashed a throw that sailed into right field. With runners on second and third, Weaver elected to have Alexander walk Aurelio Rodriguez to fill the bases. Ed Brinkman sent a fly ball to right field. Cash tagged up and the “enraged turtle” just beat the throw from right fielder Rettenmund.

Chuck Seelbach replaced Coleman on the mound in the bottom of the 12th inning. Coleman had allowed only one run and four hits in 11 innings, the last being Don Buford’s second single of the game, in the 11th inning. Coleman had left for a pinch-hitter, Jim Northrup, in the top of the 12th. After the Tigers took the lead, Seelbach retired the Orioles in order, striking out Blair at 11:45 P.M. to secure his fifth save of the season. Coleman was credited with the win, bringing his record to 9-5 and reducing his ERA for the season to 1.75. His great start in 1972 resulted in his being named to the All-Star Team for the only time in his career.

Al Kaline, with hits in each game, brought his career total to 2,725. He would finish the season with a team-leading .313 batting average. He played two more seasons, corralling his 3,000th hit late in the 1974 season. He was inducted into the Hall of Fame in 1980.

Tigers catcher Bill Freehan and outfielder Willie Horton had first been on the same major-league playing field 12 years earlier when on July 12, 1960, as teenagers, they participated in a youth all-star competition at Briggs Stadium. Freehan was an 11-time All-Star at the big-league level and Horton was a four-time All-Star who banged out 325 homers in 18 major-league seasons.

Joe Coleman, whose career began on the Boston sandlots, had come to Detroit from the Washington Senators before the 1971 season in an eight-player deal that sent Denny McLain and three other players to Washington. Coleman went 20-9 in 1971 and in 1972 would finish at 19-14 with a 2.80 ERA. In his time with the Tigers, which ended when he was sold to the Cubs on June 8, 1976, he went 88-73.

Dave McNally, who won the opener, wound up the season at 13-17 and three years later gained lasting fame when he joined with pitcher Andy Messersmith to successfully challenge the reserve clause. His first-game opponent, Mickey Lolich, finished the season at 22-14. It was the second and last time that he would win 20 or more games in a season.

Billy Martin was in his second year as manager of the Tigers. Detroit was the second of five teams managed by Martin. He had led the Twins to a division championship in 1969 and would win a pennant with the Yankees in 1976 and a World Series with New York in 1977.

Earl Weaver was in his fourth full year at the helm of the Orioles, having taken over for Hank Bauer midway through the 1968 season. His teams had been to the postseason in each of the prior three years, winning the World Series in 1970. His teams went to the postseason in five of his first six full seasons as manager, and he was inducted into the Hall of Fame in 1996.

The Tigers and Orioles would contend for the balance of 1972. The games lost to the strike at the beginning of the year were never made up and, playing an uneven schedule, the Tigers won the AL East in 1972, edging the Boston Red Sox by a half-game. The Tigers were stopped in their attempt to return to the World Series when they lost in the ALCS to the Oakland A’s. The Orioles, after occupying first place as late as September 4, won only 11 of their last 25 games and finished in third place, five games behind the Tigers.

The Orioles’ Brooks Robinson won his 13th consecutive Gold Glove award, and Paul Blair won his fourth consecutive Gold Glove. Ed Brinkman won his only career Gold Glove at shortstop. The Tigers would not return to postseason play until 1984, when they won the World Series. By then, manager Billy Martin had been fired by the Tigers, A’s, Rangers, and Yankees (three times). The Orioles were in the midst of an 18-year stretch (1968-1985) in which they finished above .500 in each season. The 1972 season broke a three-year string of World Series appearances. They would be back to the Series in 1973 and 1974.

1 The strike began on April 1, during spring training, and ended on April 13. The 86 scheduled games that were canceled were not played, and the teams played an uneven schedule.