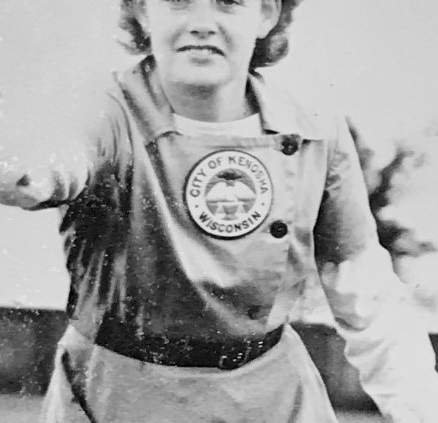 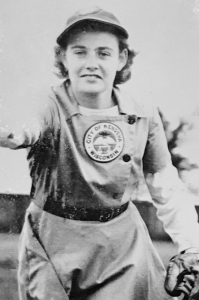 The All-American Girls Professional Baseball League (AAGPBL) had a grueling schedule.1 In its inaugural campaign, in 1943, teams shoehorned 108 regular-season games into a three-month period by playing seven days a week, with a Sunday doubleheader thrown in for good measure.2 Since each team carried only four or five hurlers on its 16-woman roster,3 top pitchers were expected to throw a lot of innings. So, when the Kenosha Comets starter ran into difficulty in a June 25 game against the South Bend Blue Sox, it wasn’t out of the ordinary for manager Josh Billings to bring in his ace, Helen “Nickie” Nicol, who had thrown a complete game two nights earlier.4 Nicol took the ball and delivered one of the greatest relief outings in league history.

The 23-year-old Alberta native had already become a fan favorite in Kenosha.5 Before the league transitioned to side-arm (and then overhand) pitching,6 most of the league’s hurlers used a windmill delivery—but not Nicol.7 She employed a unique figure-eight style that gave her pitches great speed and a devastating rising action.8 “She could make it take off,” said Jo Winter, a star pitcher with the Racine Belles. “She had a great rise ball.”9

Kenosha came into its June 25 game in third place with a 15-16 record, three games behind first-place South Bend. The Blue Sox had lost five of their last six games, and they were clinging to a tenuous 1½-game lead on the Belles in the first-half standings.

South Bend was without the services of its 15-year-old phenom, Dorothy “Dottie” Schroeder. The slick-fielding shortstop was injured the previous evening when she was spiked at second base on a failed stolen-base attempt by Pauline “Pinky” Pirok.10 Schroeder had to be carried from the field and taken to hospital, where she received several stitches to close her leg wound. She was out of action for almost two full weeks.11

The game featured an all-Canadian pitching matchup.12 Saskatchewan’s Catherine Bennett, a 22-year-old sporting a 1-5 record, got the start for Kenosha. South Bend countered with Doris “Dodie” Barr, a 21-year-old southpaw from Manitoba. Two nights earlier, Barr (7-2) had defeated Nicol and the Comets despite walking 10 batters in the game.13

Barr’s wildness continued early in this contest, as she gave up a pair of runs in the top of the third on three walks, a sacrifice, and two wild pitches.14 Two innings later, Barr was touched for another run when Pirok walked and stole second; she came home on a single by Ann “Tootie” Harnett.

Bennett held the Blue Sox hitless through the first four innings, although she gave up an unearned run in the bottom of the fourth on a walk, stolen base, and two Kenosha errors. The Comets led, 3-1, after 4½ innings.

South Bend exploded against Bennett in the fifth. After singles by Lois “Flash” Florreich and Josephine “Jo Jo” D’Angelo put runners on first and second, the number-nine batter, Mary Holda (later Elrod), came to the plate. Holda laid down a sacrifice bunt, and on the throw to first the speedy Florreich rounded third and raced home, scoring standing up. D’Angelo, meanwhile, kept her head up and smartly advanced to third on the play. Betsy “Sockum” Jochum followed with an RBI triple, and she scored on a single by the next batter, Marjorie Hood. The three-run outburst gave the Blue Sox a 4-3 lead.

Kenosha tied the game in the sixth on a Little League Home Run. After Barr dropped Mabel Holle’s popup, catcher Mary “Bonnie” Baker picked the ball up in time to get the out at first, but her throw deflected off Holle’s shoulder and rolled all the way to the fence.15 Holle circled the bases and the score was tied, 4-4.

Nicol replaced Bennett on the mound in the bottom of the sixth, and she settled into a marathon pitchers’ duel with Barr. Nicol gave up a harmless single in her first inning of work. After walking Jochum with one out in the seventh, she retired the next 24 batters in order. Her streak of dominance was broken when D’Angelo singled with one out in the 15th.

South Bend’s best chance to score against Nicol came in the bottom of the 16th. The dangerous Barr, who came into the game hitting .351,16 was walked intentionally to load the bases with two out. The move paid off, as Jo Hageman (later Hargraves) flied out to short center field to end the threat.

Kenosha’s next good scoring opportunity didn’t come until the 17th inning, when Nicol smashed a triple to left field off Barr. While she was legging out the hit, Nicol aggravated an old charley horse injury, and Blue Sox manager Bert Niehoff allowed Kenosha to use a courtesy runner to give her time to shake off the pain and continue pitching.17 Barr stranded the replacement runner at third.

Kenosha finally broke the tie in the top of the 18th. With two outs and runners on first and second, Nicol laced a clean RBI single to left field to give the Comets the lead. Shirley Jameson tacked on an insurance run with an RBI single, and an exhausted Barr was finally taken out after pitching a gutsy 17⅔ innings. Another Canadian pitcher, Muriel Coben, came in to get the third out with allowing any further damage.

Nicol ended what the Racine Journal-Times called a “thrill-jammed 18-inning contest” by tossing her 13th consecutive scoreless inning of relief.18 She raised her record to 8-4, limiting the Blue Sox to only four singles.

Nicol was selected by the fans to participate in the league’s inaugural All-Star Game,19 which took place less than a week later in Chicago.20 The game was played on July 1 under temporary lights, making it the first night game played at Wrigley Field.21 In front of 7,000 fans, Nicol pitched three hitless innings for the Wisconsin All-Stars in a 16-0 drubbing of the Illinois-Indiana team.22

South Bend − still without Schroeder − fell out of the league’s top spot when it dropped a pair of key games to a charging Racine squad on July 2-3.23 The Blue Sox finished the first half in second place, six games behind the Belles.

Kenosha and South Bend waged an epic battle for first place in the season’s second half. Nicol was the difference maker,24 as the indefatigable hurler won 12 consecutive decisions down the stretch,25 including her 30th and 31st victories in back-to-back complete games on the final two days of the regular season to clinch the title.26

Nicol finished the season with a 1.81 ERA, which made her the league’s pitching champion. She also led the circuit in wins (31), innings pitched (348), strikeouts (220), complete games (33), and winning percentage (.795). Remarkably, Nicol earned the win in 55 percent of Kenosha’s regular-season victories.

Nicol appeared to run out of gas in the playoffs against the Belles, who coasted into the championship round thanks to their first-half title. She took the loss in Game One and Game Three, as Racine swept Kenosha in the best-of-five series.

Nicol successfully defended her pitching title in 1944 by posting a microscopic 0.93 ERA. She put an exclamation point on her outstanding season on Labor Day by pitching a no-hit, no-run game against Racine with her parents in attendance.27

Nicol was married early in 1945, and she began playing under the name Helen Nicol Fox.28

She remained with the Comets until midway through the 1947 season. On July 19, in a response to “dissension on the Rockford squad,” Millie Deegan was shipped to Kenosha in return for Nicol Fox.29 “Nickie” became a key contributor for the Peaches and helped them win three consecutive championships from 1948 to ’50. Nicol Fox’s stellar (overhand) pitching against the Fort Wayne Daisies in the final round of the 1950 playoffs almost single-handedly ensured Rockford’s “three-peat.” She earned three victories in the best-of-seven series, including a clutch shutout in Game Seven.30

Nicol Fox played until 1952 when she realized the league’s glory days were coming to an end. “I noticed that the league was folding, and servicemen were returning,” she said in 2011. “So, I figured I’d better get out there and get another job.”31 The league shut down after the 1954 season.

Nicol Fox was one of the few players in the league to excel at both underhand and overhand pitching, which helped make her the most accomplished hurler in AAGPBL history.32 She holds many of the league’s career pitching records, including most wins (163), appearances (313), innings pitched (2,382), and strikeouts (1,076). Some have called Nicol Fox the “Cy Young of the AAGPBL.”33

She was inducted into the Canadian Baseball Hall of Fame in 1998 as a member of the pioneering group of 68 Canadian women who played in the league.

Nicol Fox remained in the United States after her playing career ended, working for Motorola and the American Motors Corp.34 She was a resident of Arizona from 1972 until her death on July 25, 2021, at the age of 101.

In addition to the sources cited in the Notes, the author consulted AAGPBL.org and The All-American Girls Professional Baseball League Record Book. Box scores and standings were referenced in the Kenosha Evening News and South Bend Tribune.

8 The pitcher’s arm goes in and out and around in a figure-eight delivery without raising either hand above the shoulder.

12 All-Canadian pitching matchups were not uncommon in the All-American Girls Professional Baseball League (AAGPBL). Fourteen Canadian players, seven of whom were pitchers, began the 1943 season on the rosters of the four AAGPBL teams. Three of the Canadians were from Toronto and 11 were from the Prairie provinces (Saskatchewan, Manitoba, and Alberta). A big reason why there were so many Canadians in the league was that the Prairie provinces were scoured for talent by AAGPBL scouts, including Saskatchewan native Johnny Gottselig. Gottselig played in the NHL for 16 seasons with the Chicago Black Hawks. He had also managed women’s softball teams in Saskatchewan. In addition to being an AAGPBL scout, Gottselig managed the Racine Belles (1943-44), Peoria Red Wings (1946-47), and Kenosha Comets (1949-51). Matt Rothenberg, “A Hockey Hero and the AAGPBL,” National Baseball Hall of Fame, https://baseballhall.org/discover-more/stories/short-stops/johnny-gottselig-and-the-all-american-girls-professional-baseball-league, accessed October 26, 2021; “Two Edmonton Girls Sign for Pro Softball League,” Edmonton Journal, May 27, 1943: 7.

16 Barr was 12-for-36 after the games of June 23. She tripled in a pinch-hit appearance in the June 24 game against Kenosha. “Shirley Jameson Trails Terrie Davis in Batting; Honor Mickelson, Harnett.”

17 Courtesy runners were not unique to the AAGPBL. They were used informally in professional baseball until May 1950, when Commissioner A.B. “Happy” Chandler announced a rule interpretation that ended the practice. The interpretation became part of the official playing rules of the American and National Leagues, in addition to the minor leagues. United Press, “Chandler Announces Interpretations of Baseball’s Revised Playing Code,” Hartford Courant, May 10, 1950: 16; John Fredland, “August 5, 1921: KDKA’s Harold Arlin broadcasts first baseball game over commercial radio as Pirates rally to beat Phillies,” SABR Games Project, https://sabr.org/gamesproj/game/august-5-1921-kdkas-harold-arlin-broadcasts-first-baseball-game-over-commercial-radio-as-pirates-rally-to-beat-phillies/, accessed November 2, 2021.

20 Regular-season games were played the night before and the night after the July 1 All-Star game.

21 The 1943 AAGPBL All-Star Game was played at night more than 45 years before the Chicago Cubs played what many mistakenly believed was the first (official) game under the lights at Wrigley Field.

24 Nicol was given a boost in the second half by the arrival of catcher Kay Heim (later McDaniel), her former batterymate in Edmonton, Alberta. Heim replaced Marion Wohlwender (later Fricker) on the Kenosha roster. Wohlwender had returned home earlier in July after the death of her father. “Nicol’s Former Catcher Joins Comets,” Kenosha Evening News, July 27, 1943: 8; Eddie McKenna, “Comets in Racine Tonight for Two Tilts,” Kenosha Evening News, July 7, 1943: 8.

26 Kenosha played back-to-back doubleheaders on August 31 and September 1. Nicol pitched complete-game victories in the second game of the August 31 twin bill and the opener of the September 1 doubleheader.

31 Mike Sakal, “Women Ballplayers to Gather for a Reunion of Their Own,” East Valley Tribune (Arizona), October 13, 2011.