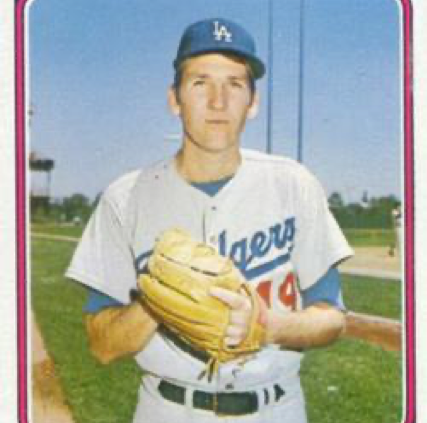 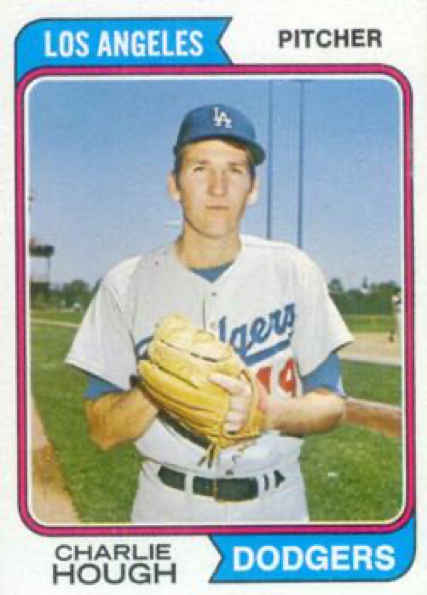 For a pitcher who finished with a .500 record, Charlie Hough packed a lot of highlights into his major-league career. The Hawaii-born, Florida-raised knuckleballer pitched in 858 games across 25 major-league seasons, appearing in three World Series and an All-Star Game.1 He won 216 games,2 including the first game in Florida/Miami Marlins franchise history, and was twice named American League Pitcher of the Month, in June 1983 and June 1984.

When you factor Hough’s minor-league and winter instructional league experience into the picture, his professional journey becomes even more remarkable – 1,197 games played and 293 wins across 29 seasons.3 To measure Hough’s career by one social yardstick: When he broke into pro baseball in 1966, Bill Clinton was a student at Georgetown University. When he retired in 1994, Clinton was in his second year as president of the United States.

For all of Hough’s skill and durability, though, his first appearance in professional baseball did not herald greatness. On Opening Day of the 1966 Pioneer League season, the 18-year-old was one of several relief pitchers for the Ogden (Utah) Dodgers who gave up a late-inning lead to the Treasure Valley Cubs4 in a 10-6 loss.

The Los Angeles Dodgers fielded six affiliated minor-league teams and one instructional league team in 1966, and Rookie-level Ogden was the lowest rung on the minor-league ladder. The Dodgers moved the team from Pocatello, Idaho, to Utah after the 1965 season, giving Ogden affiliated minor-league ball for the first time since 1955. The Pioneer League fielded only four teams, in Utah and Idaho, with the Treasure Valley Cubs calling Caldwell, Idaho, home.5

The Dodgers chose Hough in the eighth round of the June 1966 draft and sent him to Ogden to begin his career as a combination pitcher-infielder,6 on a team whose members averaged 19 years of age. The big-league Dodgers entrusted their callow crew to former major-league pitcher Tom Lasorda, in his second season as a manager. Lasorda later managed Hough in the Arizona Instructional League, at Triple-A Spokane and Albuquerque, and with Los Angeles at the major-league level, in the course of a managing career that landed him in the Hall of Fame.

When Hough reported to Ogden, he relied on a conventional mix of fastballs, curves, and sliders on the mound. He didn’t adopt his trademark knuckleball until the offseason of 1969-1970, when Lasorda and fellow Dodgers coach Goldie Holt recommended that he try it to revive his stalled career.7 He also didn’t make any infield appearances in his rookie year, and is credited with only nine games in the field in 1967 and 1968.

Five members of the Ogden Dodgers later reached the big leagues, but none of them started on Opening Day, Saturday, June 25, 1966.8 The fans at Ogden’s John Affleck Park got to see one prominent prospect, as Lasorda gave the start to righthander Larry Hutton – the Dodgers’ first-round draft pick just a few weeks before out of high school in Indiana. Hutton, who was two days younger than Hough, went 9-3 with a 3.03 ERA in 17 starts with Ogden that season. He led or tied for the league lead in many statistical categories, including wins, games started, innings pitched, hits, runs, and walks; he ran a narrow second in strikeouts.

In the visitors’ dugout, the defending league champion Treasure Valley Cubs were managed by former major-league infielder George Freese, in his fifth of 12 seasons as a minor-league skipper. Eight members of the team later reached the major leagues.9 None of the future big-leaguers started, but two appeared later in the game. Jim Williams, a two-season big leaguer with the 1969 and 1970 Padres, pinch-hit unsuccessfully, while future Cubs, Angels, and Brewers pitcher Archie Reynolds appeared in relief.

The start went to Dean Burk, also a first-round draft pick in June 1966 out of high school in Illinois. Burk posted a 9-5 record and 2.54 ERA for Treasure Valley that season and also placed at or near the top of the league in several statistical categories, including wins, complete games, and innings pitched. Another distinguished right-hander – Utah Governor Cal Rampton – threw out the first ball, with Ogden Mayor Bart Wolthuis on the receiving end and 4,124 fans watching.

The Dodgers took a 1-0 lead in the second inning on a combination of dash and sloppiness. Center fielder Terry Heizenrader10 walked, stole second, took third on an error,11 and scored on a passed ball. Both teams added a run in the fourth. Treasure Valley scored on a home run by left fielder Jeff Rude, his first of four that season. Ogden responded with a double by Heizenrader and a sacrifice by left fielder Jim McCray, sandwiched around a second Cub error.12

Burk departed after four innings, having surrendered four hits, two runs, two walks, and a strikeout. Reynolds replaced him. The Cubs pieced together a tying run in the top of the sixth to make the score 2-2, chasing Hutton in the process.13 But Ogden touched Reynolds for four more runs in the bottom half for a 6-2 lead. Two walks, two more Cubs errors, and a single by second baseman Richard Thompson accounted for the runs.14

The Dodgers were nine outs away from the joys of an Opening Day win at home. However, the Cubs’ bats were just warming up. Reliever Kenneth Raab15 opened the seventh inning for Ogden by walking two batters.16 Hough replaced Raab to make his professional debut. First baseman Dale Ford blasted a triple to score two runs, and one out later, right fielder Dick Curbow17 singled in Ford.18 After giving up a third hit, Hough was yanked in favor of yet another reliever, Patrick Hart, who closed out the inning with a narrow 6-5 Ogden lead. Hough’s final pitching line in his first game: Two-thirds of an inning, three hits, one run, and a strikeout.

Hart pitched the rest of the way for Ogden as the game turned in the visitors’ favor. In the eighth, Treasure Valley took an 8-6 lead on a home run, a single, and another homer. Ford hit the second shot, bringing his batting line to 3-for-4 with 4 RBIs. In the ninth, the Cubs picked up two insurance runs, on two singles and errors by shortstop Bill Ralston and third baseman Robert Harvey.

Reynolds capped his up-and-down outing with a shutout seventh inning for the Cubs, and reliever Garry Benson slammed the door on the Dodgers with two final shutout innings. The game ended 10-6, with Reynolds earning the win and Hart taking the loss.

Ogden went on to win the league title with a 39-27 record, with Treasure Valley three games back in second place at 36-30. Hutton pitched six seasons and topped out at Double A, while Burk reached Triple A in a seven-season career.

Hough closed the season with a record of 5-7 with a 4.76 ERA in 21 pitching appearances, including seven starts.19 He placed at or near the top of the league in several less desirable statistical categories, including losses, hits, runs, and home runs allowed. He achieved some level of revenge against Treasure Valley on July 13, throwing a two-hit shutout in an 11-0 Ogden victory.20

Hough spent three more seasons in the minor leagues as a just-good-enough-to-dream pitcher before the knuckleball changed his career in 1970. Hough went 12-8 with a 1.95 ERA in Triple-A Spokane using his new pitch, then capped his turnaround season with eight games with the big-league Dodgers. It took him until 1973 to stick firmly in the majors, but the transformation of Charlie Hough into a baseball institution had begun.

Neither Baseball-Reference nor Retrosheet provides box scores of minor-league games, but the June 26, 1966, edition of the Ogden (Utah) Standard-Examiner published a box score.

Image of 1974 Topps card #408 downloaded from the Trading Card Database.

3 Hough broke into professional baseball as a pitcher-infielder, and his total of 1,197 professional games played includes appearances as an infielder.

4 A game account in the Ogden (Utah) Standard-Examiner refers to the team as the Caldwell Cubs, for their home city of Caldwell, Idaho. Baseball-Reference and a game story in the Idaho Statesman of Boise, Idaho, call the team the Treasure Valley Cubs. A Newspapers.com search of news reports from 1966, conducted July 30, 2021, found 169 matches for “Treasure Valley Cubs” compared with 29 for “Caldwell Cubs.”

5 The other two teams were the Idaho Falls Angels, a California Angels affiliate, and the Magic Valley Cowboys, a San Francisco Giants affiliate. The Cowboys played in Twin Falls, Idaho.

8 Other Ogden players who reached the big leagues were John Gamble, Jim Hibbs, Bill Russell, and Bob Stinson. Not all of them may have been on the team on Opening Day. Another noteworthy Dodger that season was Justin Dedeaux, 21-year-old son of Rod Dedeaux, legendary college coach at the University of Southern California and briefly a major-league player. Justin Dedeaux hit .218 in his only professional season.

9 The 1966 Treasure Valley Cubs players who reached the big leagues were Rick Bladt, Jophery Brown, Joe Niekro, Rich Nye, Frank Reberger, Archie Reynolds, Bill Stoneman, and Jim Williams. Not all may have been on the roster on Opening Day.

10 The Ogden Standard-Examiner’s game story incorrectly identifies him as Jerry Heizenrader. Baseball-Reference identifies the outfielder as Terry Heizenrader, and a Newspapers.com search of game stories from 1966 indicates Terry is the correct name.

11 Four members of the Cubs committed errors: Burk, catcher Bob Owens, shortstop Bruce Carmichael, and relief pitcher Reynolds. The game story does not specify who erred in the first inning, though it clearly wasn’t Reynolds, who hadn’t entered the game yet.

14 Ritchie. Curiously, the box score accompanying the story does not credit Thompson with a hit.

15 The name is spelled Raub in the Ogden Standard-Examiner’s box score, but Raab in Baseball-Reference and in a box score published by the Idaho Statesman (Boise, Idaho), June 26, 1966: B1. A Newspapers.com search of stories from 1966 suggests Raab is the correct spelling.

16 Available box scores are unclear and contradictory on Raab’s stint. The Ogden box score says Raab faced three batters and walked two, without recording an out. However, the Ogden game story makes clear that Treasure Valley scored three runs – two on a triple, one on a single. It seems most likely that Raab faced only two batters and walked them both, and that Hough replaced him and allowed the run-scoring hits. If Raab had faced three batters and allowed all three to reach, the Cubs’ triple would have scored all three, and he would be charged with three runs, not two.

17 The Ogden newspaper spelled the name Carbow, but Baseball-Reference and the Idaho Statesman spelled it Curbow.

18 This order of events was extrapolated by comparing the Ogden Standard-Examiner’s box score of June 26, 1966, to Ritchie’s game story of the same date. Raab is credited with allowing two walks, two runs, but no hits. Hough is charged with allowing three hits and one run. Thus, it appears that Hough came in and surrendered Ford’s triple, which drove in the two runs charged to Raab. Hough then gave up the single to Curbow, driving in Ford; that run was charged to Hough, who allowed Ford to reach base. Unfortunately, the game story does not identify Hough’s first professional strikeout victim.