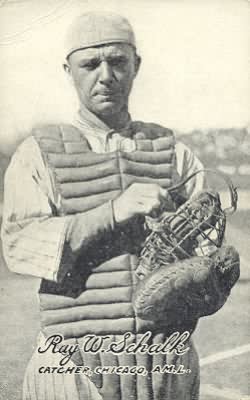 The Chicago White Sox finished the 1921 season in seventh place in the American League, 36½ games behind the pennant-winning New York Yankees. In 1922 the White Sox played 35 of their first 47 games on the road and when June began, they were again mired in seventh place, but only 7½ games back.

On June 6 Kid Gleason’s team began a 20-game homestand at Comiskey Park, in which they won 14 games, climbing to fourth place. On June 27 Chicago opened a two-game series against the Tigers in Detroit.

The Tigers, meanwhile, had not fared much better in 1921, ending in sixth place. In 1922 player-manager Ty Cobb rallied his team, and after a dismal 7-14 start to the season, the Tigers were 35-31 entering the series against the White Sox. Detroit had also started an extended set of games at Navin Field on June 6, and had gone 15-5 in the first 20 games of the homestand.

Cobb called on right-hander Howard Ehmke (8-8, 3.95 ERA) to start on the mound. Ehmke had been a rookie in the Federal League in 1915 but had then signed with the Tigers in 1916 and became a regular starter for Detroit in 1917.1 Gleason named left-hander Ferdie Schupp (2-4, 5.98 ERA) as his starter. Schupp, whose best statistical season was in 1917, when he won 21 games while pitching for the New York Giants, had been signed in the offseason by Chicago.

After Ehmke had a 1-2-3 top of the first, Schupp was attacked as soon as he took the mound. Lu Blue opened the bottom of the first by hitting a double to right field. Schupp retired both Fred Haney and Cobb on infield outs, but then Bobby Veach stroked a single to left, plating Blue. George Cutshaw drew a walk, and Ira Flagstead drove the ball to deep center. By the time the White Sox fielders returned the ball to the infield, Flagstead had “scored behind Veach and Cutshaw”2 with an inside-the-park home run, his second homer of the season. The Tigers had grabbed a quick 4-0 lead.

Chicago chipped away in the top of the second. With one out, Johnny Mostil hit the ball out of the park for a solo home run, his third circuit clout of the year.

Schalk, batting eighth in the White Sox order, led off the top of the third and sent Ehmke’s offering deep over the left-field wall, cutting the Detroit lead to 4-2. The Tigers answered in their next set of at-bats, though. Cobb walked to start the inning. Veach singled to left, with Cobb motoring to third. Two outs later, Topper Rigney stroked a single to right, and Cobb scored.

In the Chicago half of the fourth, Collins singled and Harry Hooper walked. Mostil popped out, then Bibb Falk crushed a pitch to deep left, good for a two-run double. Earl Sheely flied out to left and then Schalk tripled to right field, driving in Falk. The game was now tied, 5-5.

Ehmke had allowed only five hits in his four innings of work, but “what robust things they were: Mostil and Schalk culled home runs over the left field fence, Schalk smoked a triple to right and Falk bounced a double off the concrete wall”4 in left. Chick Gagnon pinch-hit for Ehmke in the bottom of the fourth and struck out. Hodge walked Blue and Cobb but worked his way out of the jam without allowing a run.

Bert Cole came on as a reliever to start the fifth inning for the Tigers. Both relievers put up zeroes in the fifth, sixth, and seventh innings. In the Detroit half of the sixth, after Haney drew a two-out walk, Chicago pitcher Charlie Robertson, who was in the White Sox dugout, was ejected by home-plate umpire Billy Evans for “bench-jockeying,”5presumably for arguing over the called ball four.

In the eighth Collins and Hooper each drew one-out walks. An out later, Falk singled up the middle, and Collins scored, giving Chicago its first lead of the game.

According to the Detroit Free Press, Detroit’s Cole “pitched brilliantly for four innings, but collapsed completely in the ninth.”6 In the top of the final frame, Cole “yielded a harvest of three singles and a pair of doubles”7 to the White Sox. Schalk, who had singled to lead off the seventh, started the ninth-inning barrage with a double and advanced to third on Hodge’s single. Ernie Johnson “cracked the first pitch for two bases and Schalk tallied,”8 with Hodge halting at third base. The Chicago pitcher scored when Eddie Mulligan lifted a long fly ball to Cobb in center and Hodge tagged. Collins sent a single through short, scoring Johnson. The White Sox had added three more runs.

The Tigers managed only three hits after the third inning, and all were singles. One of the hits came off the bat of pinch-hitter Danny Clark, batting for Haney with two down, but then Hodge retired Veach to end the game and “Gleason’s White Sox killed off the chesty, roaring Tigers, 9 to 5.”9 Chicago extended its winning streak to six games. In addition, this victory was their 15th win in their last 18 games. In that span, the White Sox had climbed from the American League cellar into a third-place tie with the Tigers.

Schalk emerged as the offensive hero for Chicago. He hit his first triple and third home run of the season. In 1922 he hit only four home runs, and for his career, he tallied just 11 round-trippers. He had entered the game batting .246 but raised his mark 14 points, to .260. His slugging percentage jumped from .299 to .340. As unlikely as it seemed, he put together the four hits needed to hit for the cycle. Schalk finished the 1922 season with a meager slugging percentage of .371 (he collected only 29 extra-base hits in 442 at-bats), compared with the American League average slugging mark of .398.

Irving Vaughan of the Chicago Tribune wrote that “Ty Cobb employed two hurlers [Ehmke and Cole] and both found trouble in the same person. He was Mr. Schalk.”10 Schalk became the first ballplayer in Chicago White Sox franchise history to hit for the cycle. The next occurrence took place 55 years later, when Jack Brohamer hit for the cycle on September 24, 1977, against the Seattle Mariners.

Schalk’s feat was one of four cycles in the 1922 season. New York Giants right fielder Ross Youngs did it first (on April 29 against the Boston Braves), followed by Brooklyn Robins second baseman Jimmy Johnston (on May 25 against the Philadelphia Phillies in the first game of a doubleheader). Schalk’s accomplishment was the third cycle of the season, and then New York Yankees right fielder Bob Meusel hit for the cycle for the second time in his career on July 3, against the Philadelphia Athletics. In all four games, the batter who hit for the cycle was on the visiting team.

As of the beginning of the 2020 season, 19 catchers have been elected to Baseball’s Hall of Fame. Ray Schalk was inducted in 1955, the same year as Gabby Hartnett. Schalk and Hartnett followed Buck Ewing (1939), Roger Bresnahan (1945), Mickey Cochrane (1947), and Bill Dickey (1954) into Cooperstown. Of these first six backstops in the Hall of Fame, all were known for their defensive prowess, but probably only Cochrane, Dickey, and Hartnett are considered offensive stars. Schalk was certainly not a slugger, but on this day he accomplished the rare feat of hitting for the cycle. Schalk, Cochrane, and Carlton Fisk are the only Hall of Fame catchers to hit for the cycle.

In addition to the sources mentioned in the Notes, the author consulted Baseball-Reference.com, MLB.com,Retrosheet.org, and SABR.org.

1 Ehmke was traded by the Tigers on October 30, 1922, with Carl Holling, Danny Clark, Babe Herman, and $25,000 to the Boston Red Sox in exchange for Del Pratt and Rip Collins. Ehmke finished his 15-year career with the Philadelphia Athletics in 1930, amassing a 166-166 record.

3Bullion. The 1922 season was Schupp’s last in the majors. He made his final appearance on July 27 against the Boston Red Sox, facing two batters in relief, walking one of them.