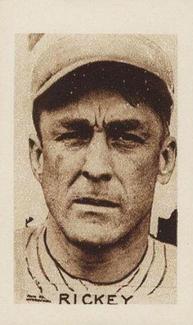 Say “Branch Rickey” to a casual baseball fan and they are likely to respond with some combination of “Jackie Robinson, Brooklyn Dodgers, integration” – words that figure prominently in Rickey’s National Baseball Hall of Fame qualifications.1 Some fans may also recall his 10-year managerial career (139-179 record with the St. Louis Browns and 458-485 with the St. Louis Cardinals – hardly Hall-worthy statistics). Only the most dedicated fans would recall anything from his playing career, which barely rates mention in the Hall of Footnotes and is not mentioned on his plaque.

But speaking of footnotes, Rickey does hold one on-field record: As a catcher, he allowed 13 stolen bases in a game.2 In 1907, Rickey’s sole season with the New York Highlanders after two years with the Browns, he was the backup catcher to Red Kleinow, who was injured when the Washington Senators came to New York in late June. Highlanders manager Clark Griffith knew that Rickey couldn’t throw but apparently had no choice but to play him in the June 28 Highlanders-Senators game.3 Rickey’s injured arm also appeared to affect his hitting – he struck out three times in this game, an unusual occurrence for any player in 1907, even for him with his .125 batting average.4

The Senators occupied their familiar last place in the American League with a 17-37 record, already 18 games behind the Cleveland Naps and Chicago White Sox. The Highlanders (27-29) were in fifth place, nine games back of the leaders. New York had pulled closer to the .500 mark the day before with a 15-7 victory over the visiting Senators in the opener of their four-game series.

Highlanders starting pitcher Earl Moore (3-3) had been acquired from Cleveland the previous month. He had faced the Senators on May 30 in Washington but lasted only two innings – his shortest outing of the year so far. Moore, with his unusual crossfire delivery, had not yet recovered from the foot injury he sustained in 1905.5

The first batter Moore faced was left fielder Otis Clymer, making his debut for the Senators.6 Clymer hit Moore’s second pitch off the scoreboard for a triple and scored on Bob Ganley’s groundout. The Senators continued their onslaught of hits and runs: Jim Delahanty and John Anderson singled and scored on Charlie Jones’s triple. John Perrine’s single scored the Senators’ fourth run of the inning. The Senators’ 1907 road uniforms were black, but the combination of black uniforms and summer sun did not seem to impede their rounds on the basepaths.

At one point during the Senators’ big first inning, Rickey attempted to throw out a runner at second, but he threw the ball into right field.7 It was Washington’s first steal of the game, and it foreshadowed the rest of Rickey’s afternoon.

Tom Hughes (4-8)8 took the mound for the Senators. He held the Highlanders scoreless until the fifth inning, allowing only a handful of singles.

In the meantime, Griffith replaced Moore with King Brockett for the top of the second inning, leaving Moore with his shortest start of the year and providing a further indication that his recovery was still incomplete.9 Two months earlier, Brockett had shut out the Senators in his major-league debut, but whatever skill or luck allowed him that success deserted him on this occasion. A Hughes hit to short, Clymer’s sacrifice fly, and Bob Ganley’s bunt gave Washington one run in the second and a 5-0 lead.

Brockett allowed another run in the top of the third on singles by Dave Altizer and catcher Mike Heydon and a double steal. This was Heydon’s first steal of the year, which was recognized and celebrated by his hometown Washington Times with a photograph captioned “Hooray! Hurroo! Stole a Base!”10

Perhaps emboldened by the successful double steal, and seeing that what throws Rickey did make went either only as far as the pitcher’s mound or well into the outfield,11 the Senators ran wild in the fourth. Singles by Clymer, Delahanty, and Jones, plus a walk and five stolen bases – including two by Delahanty – resulted in three more Senators runs for a 9-0 score. Rickey came close to nipping Delahanty at third, but umpire Tim Hurst called him safe.12

Brockett managed to hold the Senators scoreless in the top of the fifth.

In the bottom of the frame, the Highlanders finally got on the board. Wid Conroy singled and Rickey walked, and they both scored on singles by Willie Keeler and Kid Elberfeld.

The Senators returned to their scoring ways in the top of the sixth. Perrine walked. Altizer’s liner “nearly cracked the right field fence” for an inside-the-park home run,13 recouping the two runs allowed in the previous inning.

In the seventh, though ahead 11-2, the Senators did not stop taking advantage of the opportunities created by Rickey’s throwing attempts. Clymer reached when first baseman Hal Chase didn’t handle a throw from third baseman Frank LaPorte. He stole third despite Rickey’s attempted pickoff throw and scored on Delahanty’s fly out.

The Highlanders got to Hughes again in their half of the seventh. Brockett and Elberfeld singled. Brockett scored on Chase’s two-out double. LaPorte singled, scoring Elberfeld and Chase. Jimmy Williams doubled and Conroy walked to load the bases. That brought up Rickey, with at least a chance to atone for his throwing woes. Unfortunately, he struck out.

Neither team scored in the eighth, the only frame in which no runs were scored.

The Senators topped off their scoring extravaganza in the top of the ninth. Heydon, Hughes, Clymer, Ganley, and Anderson each hit singles. Brockett and Rickey combined to allow two more stolen bases. Brockett did not help his own cause, either: His ninth walk allowed was with the bases loaded, bringing the final score to 16-5, Senators.

Whatever was bothering Rickey’s arm on June 28, he seemed to recover quickly from it. He never came close to allowing that many stolen bases in a game – the most he allowed in any other game in 1907 was three.14 Rickey’s brief major-league playing career was over at the end of the 1907 season (although he had two pinch-hitting appearances in 1914, when he was the Browns manager). After that, he moved on to scouting, managing, politics, law, and eventually to front-office manager – the position in which he earned his Hall of Fame credentials.

Clymer made quite an impression in his debut with the Senators: three hits (including a triple), a walk and a sacrifice. Although he joined the team a third of the way through the season, he was the seventh most valuable player on the Senators, recording 1.8 WAR. But he was not able to continue that success in future years due to a number of injuries.15

The Highlanders took the next two games of the series – in the next game it was their turn to score 16 runs (although the Senators scored 15). Both teams finished the season in the same place in the standings as they were on June 28: the Highlanders in fifth place, and the Senators – who finished in either seventh or eighth place every year from 1903 through 1911 – eighth and last.

1 He also developed the batting helmet and the concept of the farm system, achievements well-covered elsewhere.

2 This is a modern-day record. Grant Briggs, on April 22, 1890, allowed 19 stolen bases in an American Association Philadelphia-Syracuse game. Fifteen stolen bases were allowed in an AL game between New York and St. Louis on September 28, 1911, but those were charged seven to Jim Stephens and eight to Jay Clarke. Retrosheet and Baseball Reference show that Claude Berry of the Pittsburgh Rebels allowed 13 stolen bases in a Federal League Pittsburgh-Indianapolis game on August 16, 1914, but a contemporary report shows only 12 allowed. “Hoofeds Get Ten Tallies in One Round,” Pittsburgh Daily Post, August 17, 1914: 9.

3Joseph Dittmar, Baseball Records Registry, (Jefferson, North Carolina: McFarland & Company, 1997), 53. Kleinow returned to action in the first game of the doubleheader on July 1, but Rickey had to step in again when Kleinow was spiked. However, they limited New York to three stolen bases. Kleinow returned for the second game of the doubleheader, allowing only two stolen bases. “Lose Doubleheader,” Washington Herald, July 2, 1907: 6.

6 His contract had been purchased from the Pirates two days earlier.

8 His won-lost record says more about the team he played for than his skill. His ERA for 1907, as calculated by Baseball Reference, was 3.11.

9 He did recover. By 1909, after a stint in the minor leagues, he was again an effective pitcher.