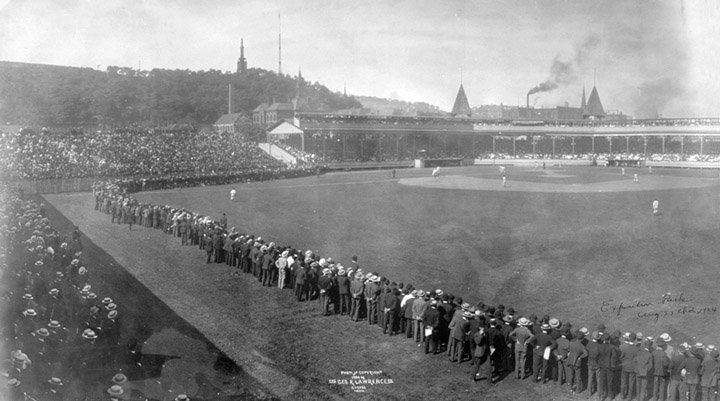 The Pittsburgh Pirates came home from a six-game road trip to St. Louis and Cincinnati with excitement in the air on Tuesday, June 29, 1909. A new ballpark was about to be opened to much fanfare and the guests for the occasion were the 37-21 Chicago Cubs, led by manager Frank Chance. Over the past month, the Pirates had opened a 6½-game lead over these same Cubs in the race for the National League pennant and were excited to extend that lead even further. The Pirates and Cubs had last played May 29-30. At the start of that series, the Pirates led the Cubs by just a half-game. Over the past month, Fred Clarke’s Pirates had gone an impressive 21-3 to enter the day with a record of 43-14 and that 6½-game lead they were hoping to extend.

Hope was high for Pirates fans. That morning’s Pittsburgh Press included a feature item on the sports page entitled “Pirates and Tigers Likely to Clash for The World’s Pennant.”1 Pirates fans knew that in order to make that prediction a reality, their team would have to go through the defending world champion Chicago Cubs. The Cubs and Pirates were to play the first game of this important five-game set at Exposition Park on Tuesday before moving across town to inaugurate the brand-new Forbes Field on Wednesday. The local papers were full of notes that morning both about the importance of the game to the season standings, but also the closing of Exposition Park and the anticipation of opening Forbes Field the next day. A few highlights:

The Sporting News previewed the series by talking about the important race between the front-runners but also the historic closing of an old home and opening of a new home for the Pirates. “Five games are to be played, starting on Tuesday, which marks the final appearance of any ball team at Exposition Park, which has been the home of the bold Buccaneers for many years. Base ball history has been made there, but the field has grown too small to accommodate the large crowds that want to attend the games.”3

Exposition Park (actually the third incarnation of a park with that name, so sometimes referred to as Expo III) was built in 1890 by the Pittsburgh Burghers of the Players League on the north side of the Allegheny River near where PNC Park stands today. It had a capacity of 10,000 in two-tiered covered wooden grandstands and giant deadball dimensions: 400 feet to each line and 450 feet to center. When the Players League folded after just one season, the Pittsburgh Alleghenies of the National League (just renamed the Pirates) moved in for the 1891 season. The high point of Exposition Park history came in 1903 when the Pirates, led by Honus Wagner, faced off against Cy Young’s Boston Americans in the first modern World Series. The first Series game to be played in a National League Park was at Exposition Park on October 6, 1903, which the Pirates won, 5-4, in front of 7,600 fans before eventually losing the best-of-nine Series, five games to three. Continual problems with flooding and sewage backup in the field due to its location near the river, as well as a small capacity, led the Pirates ownership to build Forbes Field, which held 25,000, in Bellefield, in Pittsburgh’s East End, far from any rivers.4

Perhaps saving their excitement for the new park, only 5,545 fans paid for a ticket that Tuesday to say goodbye to Exposition Park.5 At the same time, hundreds of baseball fans watched the game for free from their picnic seats on the bluffs surrounding Exposition Park.6 They were all treated to an offensive showing by the home team as the Pirates, behind Albert “Lefty” Leifield, beat Mordecai “Three-Finger” Brown and the Cubs, 8-1. The scoring started in the first inning as the Pirates scored four runs on three hits off the right-handed Brown, including a two-run triple by rookie second baseman Jack “Dots” Miller, earning him two of his 87 RBIs for the year; he trailed only his famous teammate, shortstop Honus Wagner, for the team lead. (Wagner led the team as season’s end with 100 RBIS.) Pittsburgh added another run in the bottom of the third, also driven in by Miller.

After six innings, Heinie Zimmerman pinch-hit for Brown in the top of the seventh. Left-hander Jack Pfiester took over mound duties for Chicago; he finished the 1909 season with a 17-6 mark and a 2.43 ERA, the final one of four very good seasons pitching for the Cubs. Brown had given up five runs on nine hits and a base on balls; Pfiester gave up three runs on five hits, without walking a batter. All three runs off Pfiester scored in the seventh, with Dots Miller collecting his fourth RBI of the afternoon.

Meanwhile Leifield held the Cubs to seven hits, struck out four, and finished the game on his own. The Cubs scored their lone run in the eighth inning.

Leifield struck out Cubs catcher Jimmy Archer for the final out, and baseball at Exposition Park was no more. The time of game had been 1 hour and 40 minutes, with future Hall of Fame umpire Hank O’Day working the plate and veteran Bob Emslie, in the midst of his 35 years as a National League umpire, working at first base. The Pittsburgh Press commented, “The Pirates proved stronger than their opponents in every department, in spite of the fact that Chicago had the services of Frank Chance for the first time in six weeks. The Cubs saw plainly that they were up against it, and tried to cover up some of their shortcomings by arguing with the umpires, but this ruse failed to work.”7 Two errors were committed during the game, both by Chicago.

Even before the end of the game, while the Cubs were still at bat in the ninth inning, the farewell ceremonies began. The Pittsburgh Daily Post described the scene in serious tones:

When the champions went to bat in the ninth, the notes of a bugle broke the silence. Commodore Charles Zieg, the well-known local musician, had quietly taken a position on the circus seats back of middlefield, and as soon as it was certain that Chicago had been hopelessly crushed, he sounded “taps” through his cornet. At the same time Groundskeeper Jim O’Malley commenced lowering the big flag, and just as Old Glory touched the ground and the last note of the farewell bugle call ceased, [Cubs’ catcher Jimmy] Archer struck out and the historic old baseball lot had passed into history.8

Perhaps not surprisingly, the Chicago Tribune’s reporter did not share the sentimentality in reporting the same events:. “In the Cubs’ half of the ninth inning a pathetic scene was enacted,” wrote Ring Lardner, “the bugler playing taps with more or less accuracy while the American flag was let down from the top of the pennant pole, which hasn’t held a pennant for some time and never will again.”9

Whatever anyone thought of the closing of Exposition Park, the season was a great success for the Pirates. That Tuesday’s 8-1 victory was one of 110 games won during the 1909 season as the Pirates held off the Cubs to win the pennant by 6½ games. In October, they did indeed face off with Hughie Jennings’ Detroit Tigers, winning the World Series in seven games. Meanwhile, the Pirates played the next 61 years at Forbes Field before moving near the river to Three Rivers Stadium in July 1970.