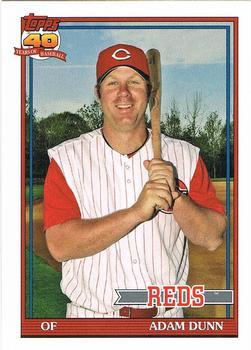 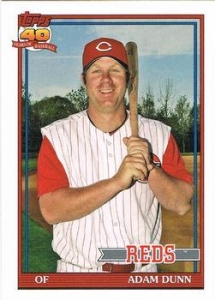 Cincinnati and Cleveland were headed in opposite directions as the Reds hosted the Indians for the start of a three-game series on Friday, June 30, 2006.

Cincinnati had finished the 2005 season at 73-89, fifth in the National League Central Division, 27 games behind the first-place St. Louis Cardinals. The offseason acquisitions of catcher David Ross, first baseman Scott Hatteberg, and pitcher Bronson Arroyo helped the club improve to 43-36 by the start of the Cleveland series, only one game behind the division-leading Cardinals. The most pleasant early-season surprise was the play of 25-year-old second baseman Brandon Phillips, acquired on April 7 from Cleveland. A good defensive infielder who never hit well with the Indians, he entered the weekend with 7 home runs, 44 RBIs, 15 stolen bases, and a .310 batting average.1

Cleveland had a 93-69 record in 2005, finishing second in the American League Central Division, six games behind the eventual World Series champion Chicago White Sox. With essentially the same personnel returning in 2006, they were expected to challenge for the division title. The Indians were 26-26 at the end of May, but a 9-16 record so far in June left them in fourth place, 18 games behind the first-place Detroit Tigers. Bullpen problems, exemplified by a 2-7 midmonth road trip that included four losses in the opponent’s final at-bat, contributed to Cleveland’s drop in the standings.2

The Reds starting pitcher for the Friday night series opener was Elizardo Ramírez (3-6, 3.61 ERA). His most recent start was in the Reds’ 4-2 win the previous Sunday in Cleveland. The Indians countered with Paul Byrd (6-5, 4.37 ERA), who pitched eight scoreless innings in Cleveland’s only victory of the prior weekend’s series against the Reds at Jacobs Field.

The 34,930 in attendance had barely settled into their seats on a warm summer evening when Ramirez immediately got into trouble. Grady Sizemore grounded out to start the game, but Ronnie Belliard hit Ramirez’s next pitch deep into the left-field seats for a home run. Consecutive singles by Jhonny Peralta, Victor Martinez, and Ben Broussard scored a second run.

A line-drive double to right by Todd Hollandsworth scored Martinez, and Aaron Boone’s single scored two more runs. The Indians threatened to take an even bigger lead after a throwing error by third baseman Rich Aurilia put runners at second and third, but a groundout and strikeout ended the inning with Cleveland ahead 5-0.

Ramirez faced 10 batters and threw 34 pitches in the first inning but settled down after that rough beginning. He allowed only two more baserunners before being lifted for a pinch-hitter in the bottom of the fifth. Both runners came in the fourth, when Franklin Gutierrez singled, moved to second on a sacrifice, and scored Cleveland’s sixth run on Sizemore’s double.

The Reds were unable to score against Byrd through six innings, despite having two runners on base in each inning from the second through the sixth. The Cleveland right-hander scattered seven hits—all singles except for Hatteberg’s double in the fourth—and two walks over the first six frames, while striking out five.

Another potential Reds rally fizzled in the seventh. Felipe López and Adam Dunn singled to start the inning, and Rafael Pérez relieved Byrd. But Ken Griffey Jr. flied out to deep center and Perez retired the next two Reds on a strikeout and a comebacker. Cincinnati had left two runners on base for the fifth straight inning.

Esteban Yan, pitching his second inning of relief for Cincinnati, retired the first batter in the top of the eighth, but Hollandsworth followed with a homer, pushing the Indians’ lead to 7-0.

They took that safe-seeming lead to the bottom of the eighth, but Austin Kearns led off with a home run on the second pitch from reliever Rafael Betancourt, who had just entered the game. Groundball singles up the middle by Phillips and Javier Valentín put runners at first and third. Juan Castro, pinch hitting for Yan, drove a 1-and-1 pitch into the left-field stands for a three-run homer, and now the deficit was down to 7-4. Roberto Hernández relieved and allowed Griffey’s two-out double but prevented any further damage.

Cleveland got one of the runs back in the ninth. With Kent Mercker now pitching for the Reds, Sizemore hit his second double of the game, a one-out line drive down the left-field line. Belliard’s single to right put the Indians ahead by four runs, 8-4, heading into the bottom of the ninth.

Closer Bob Wickman entered the game in a nonsave situation, needing three outs for an Indians win. In 2005 he had 45 saves, tied for most in the AL with Francisco Rodriguez of the Los Angeles Angels of Anaheim. During 2006, Wickman’s eight saves in April and May extended his consecutive save streak to 24, dating back to his last blown save, on August 4, 2005. So far in June, however, he had blown three save opportunities in six chances, including in Cleveland’s loss at St. Louis two days earlier.

Wickman set down the first batter he faced, but Kearns lined a single to left-center and stole second. Phillips’s fourth single of the day moved Kearns to third. With the count 2-and-2 on Valentin, Phillips took second on a wild pitch. Valentin’s groundout to first on the next pitch scored Kearns and advanced Phillips to third, but the Reds were down to their last out.

Ryan Freel pinch-hit for Mercker and walked on five pitches.

With the Indians still up by three runs, 8-5, manager Eric Wedge visited the mound with two on and two out. “I told him to go at them pitch by pitch,” Wedge said after the game. “I told him to put everything else behind him.”3 Wickman walked the next batter, Lopez, on four pitches, loading the bases.

Wickman now faced Dunn, who started the day with 25 home runs and 48 RBIs, but was hitting only .175 with runners in scoring position.4 “He wasn’t throwing many strikes,” Dunn said later. “I wanted to get a pitch in the strike zone.”5

Wickman’s first pitch was a ball. Dunn lined the next pitch, a fastball, toward the seats in right. “I knew I hit it good enough,” said the Reds slugger. “I didn’t know if I hit it high enough. Fortunately, it got out.”6

Dunn’s two-out grand slam gave the Reds a 9-8 victory, capping a stunning comeback from a seven-run deficit. “We had no business winning that game,” he said afterward. “It shows a lot about our team. We could have easily folded the tent. Everyone kept grinding and grinding. Good things happen when you do that.”7

It’s ridiculous,” said Wickman in the Indians’ locker room. “It’s embarrassing. I couldn’t throw a strike.” He threw 34 pitches in the ninth inning, but only 14 for strikes. After the groundout that cut the Reds’ deficit to three runs, he felt he was “still in the driver’s seat” because there were two outs. “It’s the first time I’ve ever blown consecutive saves and the first grand slam I’ve ever allowed!” he exclaimed.8

Cincinnati manager Jerry Narron had praise for Ramirez despite his shaky start on the mound. “He struggled in the first inning, but after that, he gave us a chance to win,” Narron said. “He was our starter and our long relief guy at the same time.”9

“It was everybody: Everybody contributed,” said Castro, who hit the pinch-hit, three-run homer in the eighth inning that put the Reds within striking distance of the Indians. “I was just glad I got an opportunity to do it. It came little by little. All of a sudden, the last couple innings, we started scoring runs.”10

The victory moved Cincinnati into a first-place tie with St. Louis. Any momentum from the comeback win did not carry over to the rest of the series; the Indians won both games. The Reds lost eight of their first nine games in July, leaving them four games behind the Cardinals. Cincinnati did climb into another first-place tie on August 24 but lost its final six games of the month, and finished the season in third place (80-82), 3½ games behind the eventual World Series champion Cardinals.12

Cleveland continued to struggle in July, posting a 10-16 record for the month. Wickman was traded to Atlanta on July 20, the third veteran player traded since Cleveland dropped out of the AL Central race in mid-June.13 The Indians received a minor-league (Class A) catcher in return for the closer who had registered the most saves (129) in team history.14 Three more veteran players were traded or sold in the next few weeks.15 Cleveland ended the year in fourth place (78-84), 18 games behind the Minnesota Twins.16

1 Phillips hit .206 in parts of four seasons with the Indians and did not make their 2006 Opening Day roster. He was traded for minor-league pitcher Jeff Stevens, who never played for the Indians and later pitched a total of 37 innings over three seasons with the Cubs. Phillips spent the next 11 years as a fixture at second base for the Reds. A three-time All-Star selection, he won four Gold Gloves and one Silver Slugger Award during his time in Cincinnati. Over his 17-year career, he hit 209 home runs, including 30 in 2007, with a lifetime .275 batting average.

11 Katzowitz. A TV broadcast of the ninth inning rally is available at  https://www.youtube.com/watch?v=jA7dj41YY-k.

13 The Indians sold 32-year-old starting pitcher Jason Johnson to Boston on June 21. They traded 36-year-old first baseman Eduardo Perez to Seattle for 21-year-old infield prospect Asdrúbal Cabrera on June 30. Both Johnson and Perez had been signed as free agents prior to the 2006 season.

15 Cleveland traded 29-year-old first baseman Ben Broussard to Seattle on July 26 for Triple-A outfield prospect Shin-Soo Choo (age 23) and a player to be named later. They traded 31-year-old second baseman Ronnie Belliard to St. Louis for 26-year-old utility infielder Hector Luna. The 33-year-old outfielder Todd Hollandsworth was sold to Cincinnati on August 9. The team saved over $4 million in salaries as a result of those six player transactions. Paul Hoynes, “Hollandsworth Latest to Be Shipped Off,” Cleveland Plain Dealer, August 10, 2006: D5.

16 Cleveland rebounded to win the division in 2007 with a 96-66 record, losing to Boston in the ALCS. An explanation for Cleveland’s 2006 slide in the standings and subsequent rebound in 2007 could be that the 2006 team was better than its 78-84 record indicated. The Pythagorean Win-Loss Percentage (pythW-L%) is an estimate of a team’s won-lost percentage based on the runs scored and allowed by the team. For 2006, this calculation results in a .549 won-lost percentage, which translates to 89 wins in a 162-game season. In 2020 Zachary Boeder listed the 2006 Indians as the second most underperforming major-league team since 2000. See “Top Five Luckiest and Unluckiest MLB Teams Since 2000,” posted July 6, 2020: