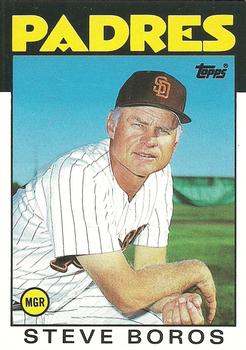 By 1986, San Diego Padres manager Steve Boros and first baseman Steve Garvey had built reputations as mild-mannered baseball men throughout their decades in the game.

But during a series against the Atlanta Braves at Jack Murphy Stadium in June of that year, both suffered their first major-league ejections in back-to-back games, adding some pizzazz to an otherwise mundane midseason series.

Garvey was tossed by umpire Charlie Williams for protesting a call at home that gave the Braves a triple play during a game on June 5. Boros was so peeved by how Garvey was treated and by replays of that third out that he offered Williams a videotape of the play during the lineup exchange on June 6 and was promptly ejected.1

Williams also ejected third baseman Graig Nettles later in the June 6 game, but the Padres weren’t deterred by the conflict, much to the delight of the 19,224 fans who were on hand. San Diego’s Marvell Wynne poked a two-out single into left field to drive home the winning run in the bottom of the 11th inning of a 3-2 victory over the Braves.

“When I went to talk to Charlie about the call [on June 5], he said, ‘I’ll look at any replay you’ve got. I didn’t miss that call.’ So I gave him the chance,” said Boros, who had become the 10th manager in Padres history in February after future Hall of Famer Dick Williams resigned three days into spring training. “I’m not proud of what I did, but it was something I had to do. Any ump can miss a call, but he had no right to throw Garvey out so fast. That’s what I was upset about.”2

The chaos began when rookie Bip Roberts and Tony Gwynn hit back-to-back singles to put runners on first and second in the bottom of the third before Kevin McReynolds hit a sharp grounder to starting pitcher Zane Smith. Smith threw to second baseman Glenn Hubbard, who threw to first baseman Bob Horner to complete the routine double play.

The speedy Roberts continued running and appeared on video replay to come in to score, but Williams ruled that he missed the plate, so an apparently late tag from catcher Ozzie Virgil was called the third out of the inning to give the Braves their first triple play since July 15, 1978.

Garvey was waiting on deck and was shocked by the call from the ninth-year umpire, who was part of the umpiring crew for the 1985 All-Star Game. Garvey protested and told Williams, “We’ve got to bear down,” and used his bat to mark the area near home plate where Roberts had slid. That earned him his first ejection after 2,261 major-league games, which turned out to be the only one of his career.3

“He comes up and starts arguing about the play,” Williams said. “I told him to get out of there. Then he starts drawing his pictures and showing me up. I couldn’t care less about Garvey and what he feels and what he does. I’ve got to run a ballgame.”4

“It’s unbelievable. I didn’t say anything,” Garvey countered. “I’ve been playing baseball for 30 years [including 16 major-league seasons] and I’ve never been thrown out of a game, never even close. I’ve never even cussed an umpire.”5

The Braves won, 4-2, on the strength of eight innings from Smith to open the four-game series, which was the first meeting of the season between the teams.

But umpire Williams’s call seemed to bother Boros more than the loss.

“[Williams] told me to look at the tape. I saw the replay three or four times last night,” Boros said. “It ate at me all night and all day. A friend in baseball suggested I bring a tape of yesterday’s game out to him with the lineup card. I decided about 2:30 or 3 o’clock today to do it.

“When I brought out the tape, he asked me if I was looking to get thrown out,” Boros said. “I told him, ‘Charlie, it doesn’t matter now.’”6

Now, a new game. Despite the brouhaha started by his aggressive baserunning the night before, Roberts once again came out of the box hustling in the bottom of the first inning. He reached on an error by first baseman Horner and stole second. Gwynn moved him to third when he grounded out to second. Wynne also grounded out to second, allowing Roberts to score.

Atlanta answered in the fifth, with Virgil swatting a leadoff home run and Hubbard moving along the bases via small ball. He followed Virgil’s homer with a walk, went to second on starting pitcher David Palmer’s sacrifice, moved to third on Omar Moreno’s groundout, and scored on a wild pitch for a 2-1 lead.

Garry Templeton walked to open the bottom of the fifth, and after starting pitcher Andy Hawkins failed to advance him by striking out on a sacrifice attempt, Templeton was cut down at second on Roberts’ fielder’s-choice grounder to the mound. Gwynn followed with a single to move Roberts up a base, and Wynne tied the game by sending an RBI single through the right side of the infield. Wynne stole second to put two runners in scoring position, but after Garvey walked, Terry Kennedy struck out to end the threat.

In his return from a five-game absence with a hamstring injury, Nettles was caught looking for his third strikeout of the game for the second out in the bottom of the sixth. He exchanged words with home-plate umpire Harry Wendelstedt and pointed his bat toward Williams, who was umpiring at third base. When Nettles took his position at third base for the top of the seventh, he made comments to Williams, and after two pitches, Nettles earned himself the sixth and final ejection of his 22-year career.7

“Puff (Nettles) told me he pointed the bat to third,” said Harry Dunlop, who took over San Diego’s managerial duties for the game. “When he got there, the ump asked if he gestured toward him. Puff said he did and that was it.”

Wendelstedt, the crew chief for the game, acknowledged that the reason behind the ejection of Boros before the game was the videotape, but deferred to the National League president’s office for comment about Nettles: “… You’ll have to get that through Chub Feeney.”8

After Nettles’ ejection, fans on the third-base line threw coins at Williams, causing a temporary delay in the game while security officers huddled around him.9

From the seventh inning through the 10th, the teams put runners into scoring position five times without scoring — including a two-out, bases-loaded situation for each team (Atlanta in the eighth and San Diego in the 10th).

Braves reliever Jeff Dedmon recorded two quick outs in the bottom of the 11th before Roberts singled to reach base for the fifth time in his second game back from a 14-day stint on the disabled list with a strained groin ligament.10 He moved to second on Gwynn’s second single of the game and scored when Wynne poked a single between the shortstop and third baseman.

San Diego reliever Gene Walter, who came on in the 10th inning, earned the second victory of his career. Hawkins went 6⅓ innings, allowing two earned runs on seven hits and two walks. Dedmon took the loss after four innings of relief. Palmer had been sharp in his six innings for the Braves, striking out nine, one short of his career high.

The victory was just San Diego’s second in eight games. The next day, an airplane toted a banner that read “Impeach Umpire Williams,” and another aircraft dropped an inflatable pair of eyeglasses onto the field.11 The Braves won that game, 4-2, but Atlanta struggled throughout the season and finished 72-89.

The Padres won the series finale, 4-1, to salvage a series split, but after dropping the opening game of the next series against the Houston Astros, Boros held a closed-door meeting with the players to discuss their subpar hitting. Afterward, the Padres mustered just four hits and lost 12-1 to the Astros to fall three games under .500 for the first time since September 27, 1983.12 They hovered within a few games of the break-even mark for most of the season before finishing at 74-88, their worst showing since the strike-shortened 1981 campaign.

Boros was fired by the Padres at season’s end and replaced by former All-Star shortstop Larry Bowa, but team executives put some of the blame on themselves for the lackluster 1986 season.

“Looking at 1986, I think we’re all responsible for the poor showing of our ballclub,” said general manager Jack McKeon. “That includes me, the manager, the staff, and the players. We want it to be known that we do not want Steve to shoulder all the blame for that situation.”13

1 Boros had been ejected twice in the minor leagues. As a manager with Waterloo, Iowa, of the Midwest League in 1971, he was ejected and inserted a makeshift scoreboard placard over the visiting team’s name, so the displayed score would read “Umpires 9, Waterloo 2.” He was also ejected as a player with Buffalo.

7 Williams ejected only four men all season, the other coming on September 27, when he ejected Pirates left fielder Joe Orsulak for arguing balls and strikes.

10 Also reaching base five times in the game was Atlanta’s Gerald Perry, who hit three straight singles before drawing two walks. (One was intentional.)