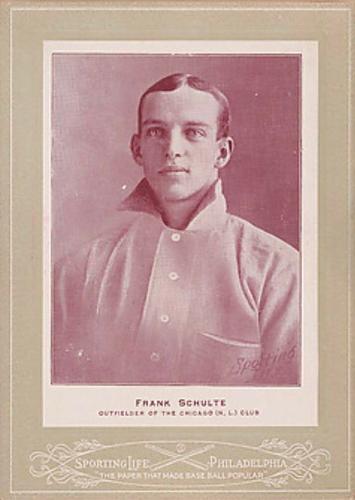 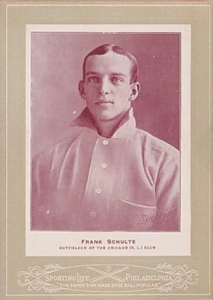 The Chicago Cubs arrived in New York to take on the Giants in a four-game series at the Polo Grounds with a 31-15 record, good for first place with a one-game lead over the Giants, the 1904 and 1905 National League champions.

The Cubs had revenge on their minds. The Giants had taken three out of four in Chicago just a few weeks earlier. Also, the Polo Grounds had not been friendly to the Cubs recently; the Giants won 9 of their 11 home games against the Cubs in 1905.

The Cubs had Monday, June 4, as a travel day and arrived in New York in the midst of a three-game winning streak. The Cubs took the first game of the series, 6-0, and the second game, 11-3, to run their winning streak to five games.

On Thursday, June 7, the Cubs sent Jack Pfiester to the mound against the Giants’ Christy Mathewson.

The game did not begin well for the Mathewson and the Giants. The Cubs’ Jimmy Slagle walked to lead off and Jimmy Sheckard and Frank Schulte both singled, scoring Slagle. Frank Chance grounded to third baseman Art Devlin, who failed in an attempt to force Schulte at second. Henry Steinfeldt singled to left, driving in Sheckard and Schulte. Joe Tinker followed with an RBI double, chasing Mathewson.

Joe “Iron Man” McGinnity came in to pitch for the Giants, but he didn’t do much better. Johnny Evers grounded to shortstop Bill Dahlen, who threw home to get Steinfeldt in a rundown. During the rundown, McGinnity dropped the ball while tagging Steinfeldt, who was standing still in an attempt to allow Tinker to advance to third and Evers to second. Devlin picked up the ball and threw it home, hitting Steinfeldt in the back. Steinfeldt’s run made the score 5-0. Pat Moran singled, driving in Tinker and Evers. Pfiester was retired on a bunt attempt for the Cubs’ first out.

Slagle, batting for the second time in the inning, doubled Moran home, and Sheckard and Schulte walked, loading the bases. McGinnity got Chance to pop out to Billy Gilbert at second, but Steinfeldt drove one to deep center. Roger Bresnahan saved it from going through the ropes for a home run, holding Steinfeldt to a bases-clearing triple that made the score 11-0. Tinker’s groundout to short ended the half-inning.1

After sending 15 batters to the plate in the first inning, the Cubs did not slow down very much. Eight Cubs batted in the second inning2 and the team scored three runs with the help of two Giants’ throwing errors. Cecil Ferguson replaced McGinnity on the mound and got out of the inning with the score 14-0.3

It looked as though the Giants might make it through the third inning unscathed, but the Cubs had other ideas. With two out, Moran, Pfiester, and Slagle all singled with Moran scoring on Slagle’s hit. Sheckard walked to load the bases again and Schulte walked, scoring Pfiester. Chance left the bases loaded by flying out to Bresnahan in left to end the inning with the Cubs up 16-0.4

The New York Tribune correspondent wrote, “Heavy clouds threatened rain in the fourth inning, and the visitors, knowing that they had the game safely won, tried to rush matters so that there would be no danger of the game being called before four and a half innings had been played.”5 Evers singled and stole second, but then walked right into the ball in Dahlen’s hand to be put out and Moran jogged around to third on Pfiester’s single to right and kindly allowed himself to be put out. After four innings, the Cubs had a 17-0 advantage. The crowd began to leave the grounds, while some who remained amused themselves by throwing lemons at the local players.6

In the fifth inning the only run the Cubs could score was on a home run by Schulte to make the score 18-0.

Then, as described by the next day’s Chicago Tribune, “The sixth inning was momentous. It was momentous not because of what was done, but for what was not done. Chicago did not score a run that inning.”7

In the eighth inning, Chance scored the 19th and final run for the Cubs.

The final line was Chicago: 19 runs on 22 hits, New York: no runs on four hits. The Giants made five errors, the Cubs none.

This article from the Washington Post the next morning pretty much summed up the game: “Never have the champions appeared to worse advantage. When a team is not hitting it looks slow. The New Yorks not only did not hit yesterday, but they fielded badly, were listless, disjointed in team play and not alert mentally. Mathewson was batted out of the box in the first inning. He looked pale and not himself. The rooters had not forgotten what he had done, however, and he was applauded generously as he left the box. ‘Never mind, Matty,’ encouraged the crowd. The Chicago artillery was trained on McGinnity and Ferguson with just as deadly effect. At present these Cubs could make base hits if they had to face torpedoes.”8

The Cubs were 34-15 after this day’s game, 3½ games ahead of Pittsburgh, and had stretched their lead to four games over the defending National League champion Giants.

The 1906 Cubs finished the season in first place with a 116-36 record and lost to the Chicago White Sox’ “Hitless Wonders” in six games in the World Series.

The Cubs and Giants on this day had a number of future Hall of Famers, including the first two Giants pitchers (Mathewson and McGinnity), along with Bresnahan and manager John McGraw. The Cubs’ future Hall of Famers on this 1906 team were Tinker, Evers, Mordecai Brown, and player-manager Frank Chance.

In addition to the sources cited in the Notes, the author accessed Retrosheet.org and Baseball-Reference.com for player and game information. Some of the scoring details from the newspaper articles was inconsistent.