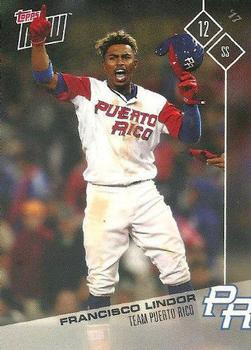 The Saturday night game of the 2017 World Baseball Classic (WBC) Pool D in Zapopan, a suburb of Guadalajara in Jalisco, Mexico, started at 8:40 on March 11, a little under two hours after the end of the 10-inning Venezuela-Italy game.1 Crews had to hustle to let the stadium empty out and then refill, and a raucous sellout crowd of 15,647 – a number that topped the afternoon game by about 800 – hoped for a better outcome for the host country than the opening game of the Classic. In that one, played two nights earlier on March 9, Mexico carried a 9-5 lead into the last of the ninth, only to have Italy score five runs to win, 10-9.

The night before, Puerto Rico had destroyed Venezuela 11-0 in a game stopped by the mercy rule in the last of the seventh.

This time, Puerto Rico again jumped out to a big lead, and Mexico rallied, but a critical ninth-inning error enabled Puerto Rico to pull away for its second win in two games.

Angel Pagan led off the game for Puerto Rico by lining a single to left, and Francisco Lindor – at age 23 coming off his first career All-Star Game appearance and a Gold Glove recipient with the Cleveland Indians – followed by hitting a 1-and-2 pitch from Miguel Gonzalez for a home run to right. Mexico got one back in the bottom of the first when Brandon Laird singled home Esteban Quiroz with two out.

Pagan started another rally in the third, singling with one out and stealing second. After a two-out walk to Carlos Correa, Carlos Beltran, recently signed to be Correa’s teammate on the Houston Astros, singled to center to score Pagan for a 3-1 lead.

Puerto Rico upped the edge in the fifth when Reymond Fuentes and Pagan – an 11-year major-league veteran who had played in what turned out to be his final professional season in 2016 – led off with walks, sending Gonzalez to the showers. Jacob Sanchez got Lindor to force Pagan at second, but Fuentes went to third on the play and scored on Correa’s sacrifice fly.

Jorge Lopez pitched well for Puerto Rico, giving up only a third-inning walk after allowing three runners in the first. He reached 59 pitches when he retired Luis Cruz for the first out in the last of the fifth. With Lopez nearing the first-round pitch limit of 65,2 and a left-handed batter coming up, manager Edwin Rodriguez brought in southpaw Hector Santiago, who finished the fifth and put down the side in order in the sixth.

Puerto Rico threatened in the top of the sixth against Giovanny Gallegos. Javier Báez, who claimed National League Championship Series co-Most Valuable Player honors in October 2016 during the Chicago Cubs’ drive to their first World Series title in 108 years, led off with a double and stopped at third on Eddie Rosario’s single to right. But when right fielder Alex Verdugo threw home, the always aggressive Rosario tried to take second and was gunned down by catcher Xiorg Carrillo. T.J. Rivera then fouled out and Fuentes flied out.

Lindor extended Puerto Rico’s lead to 5-1 with one out in the seventh on his second homer of the game. As it happened, the Islanders needed all of that margin when Mexico, which had been held to three hits through six innings, finally rallied against Santiago in the bottom of the inning.

Laird led off with a double and stopped at third on a single by Efren Navarro. The runners held when Cruz flied out, but Chris Roberson – who had hit for Sebastian Elizade when Santiago was brought into the game in the fifth, then remained in the game in center – lined a single to left to bring in Laird.

Carrillo grounded to third; Correa went to second for a force but sailed the ball over Baez and into right field. Navarro scored from second on the error with Roberson going to third. Roberson then came home on a wild pitch to cut the lead to 5-4.

Mexico threatened to continue its comeback in the bottom of the eighth after Luis Juarez singled to start the inning, but Joseph Colon got Adrian Gonzalez (whose 308 major-league home runs in 13 seasons through 2016 made him one of the most accomplished power hitters in the tournament) to fly to left and struck out Laird. Alex Claudio relieved and struck out pinch-hitter Japhet Amador to end the inning.

The tension in the game, suddenly a close struggle, extended into the stands at the end of the eighth. Family members of the Puerto Rican team were seated beyond the team’s dugout, down the left-field line. Accounts varied on the particulars, but the families were being harassed by some of the Mexican fans. The Puerto Rican players swarmed out of their dugout to check on their families and milled on the field as security personnel moved in and relocated the Puerto Rican fans to other seats.

Puerto Rico ended any on-field drama with four unearned runs in the ninth. With two out and Lindor on first, Beltran hit a pop foul near the third-base dugout. Carrillo got under it but dropped the ball. Still alive because of the error, Beltran walked. Molina singled to drive in Lindor with an insurance run, and Baez provided even more insurance with a three-run homer.

Edwin Diaz pitched the bottom of the ninth, giving up a walk but retiring the other batters, and Puerto Rico had a 9-4 win. Lopez was credited with the win even though he went only 4⅓ innings; WBC rules do not require five innings from the starter to be the winning pitcher.

Lindor led the offense with three hits, three runs scored, and three driven in. Beltran was on base four times with three singles and a walk. Baez had three runs batted in with his home run in the ninth.

A long day, and early morning, of baseball was done. After a 4:43 extra-inning game in the afternoon, the Puerto Rico-Mexico game lasted 3 hours 40 minutes and ended at 12:20 A.M. Puerto Rico was now 2-0 in the tournament. Mexico, winless with two losses, was going to need a big performance against Venezuela the following night to be one of the two teams to advance to the second round.

Above the batter’s eye at Estadio de Béisbol Charros de Jalisco are the numbers 21 for Hector Espiño (the minor-league homer king, whose number has been retired by all Mexican summer and winter league teams) and 34 for Fernando Valenzuela, who pitched for Jalisco in the 1990s.

Scoresheet, notes, and memories of the author, who was the official scorer for the WBC games in Jalisco.

Brenda Himrich (related to the author by marriage) made the press-box announcements in Spanish and English in Jalisco and contributed to this article.

1 The 2017 WBC was the fourth iteration of the 16-team, two-round international baseball tournament. The WBC is sanctioned by the World Baseball Softball Confederation and is operated as a joint venture between Major League Baseball and its Players Association. The tournament features the best players from around the world competing for their home countries and territories. Players are qualified if they previously appeared on the final roster of a Federation Team, if the player is a citizen of or is eligible for a passport from the team’s country or territory, or if the player is a current resident of or has one parent who was born in that country or territory.

2 A pitcher could exceed the limit if more pitches were needed to complete a plate appearance.