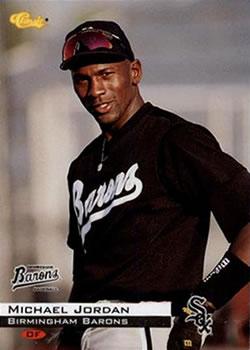 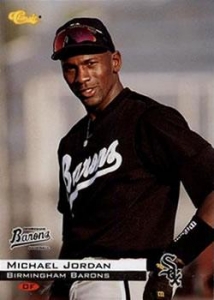 Months after Michael Jordan shocked the sports world by announcing his retirement from the NBA on October 6, 1993, speculation began that he was going to pursue a second career in baseball.

Jordan was spotted taking batting practice at Comiskey Park shortly after the calendar flipped to 1994, and on January 12 he announced his intention to sign with the Chicago White Sox and make the club—quite a change of scenery for a basketball superstar who had won seven straight NBA scoring titles and three straight league championships.

“If the White Sox were to tell me that they didn’t think I was good enough to make the team, and that they don’t want me at spring training, then I would accept their wishes and not go,” Jordan said. “But my enthusiasm for doing this is so great that if they wanted me to pay my own way, then I’d pay my own way down there just for the chance to show what I can do.”1

Jordan, who said his late father, James, had encouraged him to take up professional baseball, signed a contract with the White Sox on February 7, setting the stage for a media frenzy that spiced up the ordinarily mundane exhibition season by following his every move through the Grapefruit League.

That was perhaps exemplified best when a throng of reporters and 7,091 fans—including noted basketball announcer Dick Vitale2—crammed into Ed Smith Stadium on March 4, 1994, to watch the White Sox take on the visiting Texas Rangers in the spring-training opener for both teams. The 31-year-old Jordan wasn’t in the starting lineup against Rangers ace Kevin Brown but did make his debut as a defensive replacement in the sixth inning. By game’s end, Texas had the best day on the field with a 9-0 victory.

Five Texas pitchers combined for a four-hitter (reliever Matt Whiteside was the winner after striking out three in two innings) and the Rangers’ offense exploded—highlighted by a two-run single in Will Clark’s debut for the team and a home run by Jose Canseco, who was returning from elbow surgery that cost him most of the 1993 season. But all of that was overshadowed by Jordan’s debut, which consisted of an infield dribbler and one routine play in the field.

Jordan’s first defensive action came in the top of the seventh, after he replaced Darrin Jackson in right field. Canseco looped a double down the right-field line, which was cleanly fielded by Jordan. Even that routine action pushed the fans into an ovation.

“It’s a little out of whack,” said Clark, who signed with the Rangers as a free agent before the season and made that season’s American League All-Star team. “Anytime a guy hits a foul ball and everybody stands up and cheers, it’s a little crazy. I wouldn’t want to be in Michael’s shoes. His every move is critiqued.”3

In the bottom of the seventh, Jordan came to bat hoping to improve upon his two-strikeout showing from the previous day’s heavily attended intrasquad game.

He faced rookie Darren Oliver, a 23-year-old hoping to win a role in the Texas bullpen after pitching in two games late in the 1993 season. Oliver’s first pitch was a fastball out of the strike zone, but he got Jordan to swing and miss on the next two pitches.

“Michael was a tad slow in that area,” said Rangers manager Kevin Kennedy of Jordan’s bat speed. “Obviously, he needs a lot of work. Hitting a baseball is a very difficult thing to do. I should know, I played forever and couldn’t do it. That’s why I became a manager.”4

Jordan said he anticipated a curveball on the next pitch, but instead got another fastball, which he said was more effective because of Oliver’s slow windup that made the ball come “spittin’ at you.”5 Oliver may have thrown a curveball in any other situation, but he was focused on putting pitches near the plate because he feared “these fans would’ve come after me” had he plunked Jordan with a pitch.6

“If it wasn’t Michael Jordan, it was just a normal, nothing play,” Oliver said years later. “There were a lot of people watching and cheering for him to get a base hit. But that wasn’t going to happen on my watch. Even though it was spring training, I didn’t want to be that guy. Can you imagine if he’d have gotten a hit? They would have replayed that about 1,000 times on ESPN.”7

Jordan made contact on Oliver’s fourth straight fastball and hit a trickler up the first-base line. Oliver fielded the ball and tagged Jordan, but home-plate umpire Drew Coble didn’t immediately signal for an out. First-base umpire Chuck Meriwether didn’t see the tag, so when Jordan continued hustling to first base and beat Oliver’s throw, Meriwether ruled him safe and the crowd became frenzied with excitement. Coble, however, quickly intervened and acknowledged the tag with a raised fist.8

“I was out,” Jordan acknowledged after the game. “He touched me on the back. As bad as I wanted to be safe, I was out. I didn’t think the referee saw it.”9

Jordan almost got a chance at redemption. He was on deck when Rangers closer Tom Henke got Allen Battle to ground out to end the game.

“I would have liked to have faced him,” Jordan said. “I’m not going to shy away from any at-bats.”10

Said Henke: “It would’ve been a thrill to pitch to him, but I wasn’t going to pitch around someone just to face him.”11

Jordan didn’t get his first hit until March 14 against the Minnesota Twins, when he snapped an 0-for-14 start with a single off submariner Jeff Innis. After the game, teammates doused him with beer in a moment Jordan said felt “almost like a championship.”12

The spring opener was scoreless for four innings until the Texas offense broke out for seven runs in the top of the fifth, mostly against reliever Scott Ruffcorn. Clark’s two-run single and two Chicago errors helped spark the rally, and Rob Ducey hit a two-run home run after Wally Ritchie entered the game. Ruffcorn took the loss after allowing six runs (four earned) in 1⅔ innings—his own error contributed to the Texas rally and was one of three committed by the White Sox during the game.

The Rangers scored again in the seventh, and Canseco hit a solo home run off Jeff Schwarz in the ninth. Canseco also homered the next day in a 15-7 Rangers loss to the White Sox, and counting three intrasquad games, he started the spring going 9-for-18, a precursor to a solid performance in the strike-shortened 1994 season.

Chicago’s Tim Raines left the spring opener after getting hit by a pitch from Brown in the first inning. He said he expected to return the next day and served as the leadoff hitter in the 15-7 victory, which featured Jordan’s first RBI and run. Jordan drove in a run on a sacrifice fly that was dropped by Rangers center fielder Oddibe McDowell, and he scored when Clemente Alvarez hit a grand slam.

“We’ve got to find out a few things about our pitching,” Kennedy said. “Nothing’s a lock. But I’ve got to believe everybody’s going to be better the second time out. Just as I didn’t get excited about the shutout yesterday, I don’t get overly worried about giving up 15 runs.”14

Jordan did not make the White Sox roster out of spring training, spent a season in the minor leagues,15 and took a tour through the Arizona Fall League. His aspirations to make the majors were applauded and criticized by many in the baseball world.

“There’s a lot of jealousy involved with the people who are belittling his effort,” said fellow two-sport athlete Brian Jordan, an NFL player looking to join the St. Louis Cardinals as an outfielder.16 “They look at players who have had to work their way through the minors, and here’s a guy getting a shot to make the team just like that. I admire him for what he is doing. Michael Jordan hadn’t played baseball since high school, yet he’s out there making contact on 80-mph pitches.”17

Michael Jordan retired from baseball on March 10, 1995, citing how the labor dispute would hinder his development. Eight days later, he returned to the Chicago Bulls, and he’d win three more scoring titles and three more championships before retiring from the NBA again on January 13, 1999.18

In addition to the sources cited in the Notes, I used the Baseball-Reference.com and Retrosheet.org websites for regular-season statistics and team information.

16 Brian Jordan played in the National Football League with the Atlanta Falcons from 1989 to ’91. He didn’t make his major-league debut until 1992 but had been in the minors since 1988.

18 Jordan came out of retirement again in September 2001 to play for the Washington Wizards at age 38. He played two seasons before retiring for good.