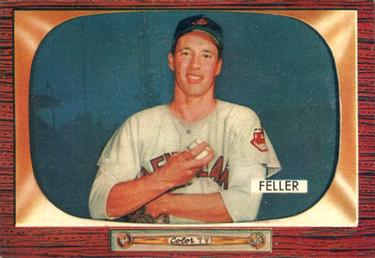 Like inbound and outbound trains, they were two pitchers headed in opposite directions. One was making his 471st start, the other, only his fourth. One was winding down a magnificent career that would eventually lead him to Cooperstown. The other was the reigning Minor League Player of the Year, so honored by The Sporting News for his 22-win season at Triple-A Indianapolis in 1954.

But on May 1, 1955, Bob Feller and Herb Score would intertwine their respective careers on a sunny day at Cleveland Stadium. Both pitchers had been roughed up in their previous starts; Feller worked four innings and surrendered five earned runs in a 9-4 loss to Chicago on April 16. Score gave up five earned runs and walked six batters, taking the loss in a 6-4 defeat to Detroit on April 24. Both players were looking for redemption as the calendar flipped to May. 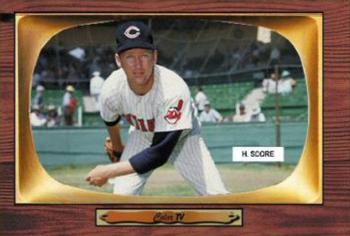 The opponent for the Sunday double dip was the Boston Red Sox. An announced crowd of 26,595 fans pushed through the turnstiles of the mammoth stadium on the shore of Lake Erie. The 1955 season was still quite young as the Indians, Tigers, White Sox, and Yankees were all bunched together at the top of the American League standings as the curtain came down on the month of April. A single game separated the four early contenders.

Bob Feller faced off against Boston’s Frank Sullivan in the opener. He wasn’t “Rapid Robert” these days. “In the old days I was confident that I could rear back and throw it past ’em,” said Feller. “Now I have to be careful with every pitch.”1 However, on this afternoon the 36-year-old veteran pitched on guile and had great control. He struck out only two batters, but the Iowa farm boy carried a no-hitter into the seventh inning. “I guess I felt the pressure more than any other time I had a no-hitter going,” he said.2 But Red Sox catcher Sammy White singled to center field with one out in the seventh inning to upset Feller’s bid for a fourth no-hitter. The next batter, Norm Zauchin, hit into an inning-ending double play. Feller retired the next six Boston batters without incident. Feller had just pitched the 12th one-hitter of his brilliant career, as well as the last of his 44 career shutouts. His longtime batterymate, Jim Hegan, provided all the offense he needed, knocking in both runs in the 2-0 win.

When he was asked to evaluate his mound work, Feller said, “It was as good as any game I ever pitched. I only faced 29 men.”3 Not too far from where Feller was being interviewed sat the 21-year-old rookie Herb Score. “This is gonna be great … me coming in after THAT performance,” Score remarked to no one in particular.4 “It’s going to be a tough act for the kid to follow,” said Feller.5 “Just go out and tell him to do better,” chimed in a grinning Hegan.6

Score took the hill to start the nightcap. He struck out the side in the first inning. A double to left field by Larry Doby in the home half of the first plated two runs. In the second inning Score gave up two doubles and a walk as Boston cut the Cleveland lead in half, 2-1. But the three outs were all whiffs. In the third inning, Score gave up a leadoff single, and then struck out the next three batters. The “kid” had pitched three innings thus far and fanned nine. What was that again, Jim Hegan?

By the end of the fifth inning Score had racked up 12 K’s. Bob Feller held the modern-day record for strikeouts in a game with 18 in a 1938 game. Score was well within equaling or topping that mark. However, the big lefty came up a bit short, registering 16 strikeouts in the 2-1 win. The heir apparent gave a masterful performance, becoming the 10th pitcher since 1900 to strike out 16 or more men in a game.7 (The record as of 2015 for strikeouts by a pitcher in a game is 20, held by Kerry Wood of the Cubs and Roger Clemens of the Red Sox. Clemens did it twice.)

The self-deprecating Score seemed to be unfazed by his achievement. “No kidding, I think a one-hitter is better than a flock of strikeouts. One is great pitching and the other is throwing. I made a lot of mistakes. I always sleep good before a game and then stay awake after one. Especially when I make mistakes.”8

Score’s manager and peers searched for the right superlatives to describe his work. “He had an excellent curve in the first three innings and again in the eighth and ninth, but you’ll see him faster,” said Indians’ skipper Al Lopez.9

Boston’s Billy Goodman did manage to get two hits off Score, but he did not put much stock in the effort. “I was lucky, that’s all,” said Goodman. “He’s got great stuff and he’ll beat the rest of the clubs too. A real good pitcher.”10 Red Sox right fielder Sam Mele agreed: “He looks just as fast as Bob Turley to me.”11

Hal Lebovitz covered the games for the Cleveland News. His headline read, “Tribe’s Terrific Twosome: Mr. Robert, Master Herbie.” It was a fitting way to say that the torch was being passed.