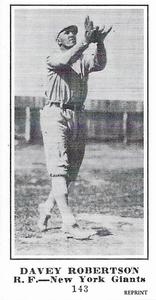 It was a brutally cold day for a ballgame at Philadelphia’s Baker Bowl, but it didn’t seem to bother the Chicago Cubs, who thumped the last-place Phillies, 19-8, with a barrage of hits. The Cubs had an all-out effort from practically the entire batting order, led by Dave Robertson’s two doubles and six runs batted in. His banner day at the plate was somewhat unexpected; he had missed spring training and had only recently joined the team.

Around 800 frigid fans witnessed an outbreak on the bases from both teams, including 21 hits by the Cubs and 10 by the Phillies. The Philadelphia Inquirer characterized the game as “an excellent replica of those old-time affairs when runs were scored by the wholesale in the days of old.” The Inquirer also reported, “It was the best batting practice the Chicagoans have had all year.”1

Robertson was making his first start of the season after having been recently reinstated by Commissioner Kenesaw Mountain Landis from his suspension for refusing to go to spring training.2 The Cubs had trained in California. According to The Sporting News, Robertson declined to make the trip, saying he didn’t need to because he was already in good condition. Robertson was reportedly in business in Norfolk, Virginia, and told the club he did not have time to go “gallivanting across the continent.”3 Robertson, who had pinch-hit twice prior to May 11, took George Maisel’s place in the lineup as the starting center fielder.

Thirty-three-year-old left-hander Hippo Vaughn got the start for the 10-9 Cubs. He was opposed on the mound by Jimmy Ring of the 6-14 Phillies. Vaughn had been one of the leading pitchers for the Cubs since 1913, compiling a 148-94 record. Ring was in his first season with the Phillies, having pitched the previous four seasons with Cincinnati before coming to Philadelphia, along with Greasy Neale, in a November 1920 trade for Eppa Rixey.

Cubs batters wasted no time in bombarding Ring with hits. An error, doubles by Charlie Hollocher, Robertson, and Charlie Deal, and singles by Zeb Terry and Bill Killefer produced five runs in the first inning. All nine batters in the lineup got a turn at the plate in that inning, as Vaughn made the last out.

Vaughn was efficient during his first three innings. Only one Phillies batter reached base, on an error, and he was erased by a double play.

Ring appeared to regain control in the fourth inning by retiring the side in order, perhaps giving the Phillies hope the game could be salvaged. In the bottom half of the inning, Philadelphia pushed across two unearned runs. Johnny Rawlings doubled for the first Phillies hit. Irish Meusel followed with a strikeout but wound up on third on a wild throw by catcher Killefer, with Rawlings scoring on the play. Russ Wrightstone’s sacrifice fly scored Meusel.

But Ring ran into trouble again in the sixth inning, when, with one out, he gave up three consecutive singles, including Vaughn’s that scored Deal. After a groundout, a stolen base, and an intentional walk, Taylor singled in Killefer and Max Flack. After Ring hit Ray Grimes with a pitch, he was replaced by lefty Stan Baumgartner, who had started and lost the day before. With the bases loaded, Robertson’s second double of the game sent home three runs. Twombly drove in Robertson with a single for the seventh run of the inning.

With a 13-2 lead in the bottom of the seventh, Vaughn appeared to let up on his pitches, as he gave up in succession a home run to Wrightstone, three singles, and a triple to catcher Mack Wheat, all of which resulted in four runs.4 The Philadelphia Inquirer asserted that Vaughn “got lazy” on the mound once he had a large lead. The Phillies rally narrowed the gap in the score to 13-6.

Since most of their regular-season games that spring had been played in temperatures in the 38- to 45-degree range, Cubs batters didn’t seem to be affected by the cold weather. They continued their onslaught on Baumgartner in the top of the eighth. With three singles and three doubles by six batters, interrupted only by Robertson’s force-out grounder, the Cubs scored five more runs, running their total to 18. One of the two-baggers was Deal’s third of the game.

Vaughn served up a two-run homer to Cy Williams in the eighth inning to make the score 18-8.

Robertson put a ribbon on the Cubs’ victory in the ninth with a run-scoring single, making him the hitting star of the day with six RBIs and giving the Cubs a final 19-8 victory. It was the most RBIs by Robertson in a game at that point in his career.

Ring took the loss for the Phillies. He gave up 12 hits, 2 walks, and 9 earned runs (plus three unearned) in 5⅔ innings. Baumgartner, who had pitched 3⅓ innings in his first game of the season the day before as a starter, gave up 7 earned runs on 9 hits and 2 walks in another 3⅓-inning stint, this time in relief. He had just been reinstated with the Phillies by Commissioner Landis after spending three seasons in semipro leagues.5

Not surprisingly, the Cubs’ relationship with the 31-year-old Robertson had become strained since the start of the 1921 season. The two-time National League home-run leader (1916 and 1917, with 12 each year) had batted .300 with 10 home runs and 75 RBIs the year before, so the Cubs were hoping he would return to form. But Robertson was unable to gain traction in the starting lineup and was traded on July 1 after playing in only 23 games. He was sent to Pittsburgh for Elmer Ponder. The trade revived his season. He batted .322 with 6 home runs and 48 RBIs in 60 games with the Pirates. On August 19 he had another outstanding performance with eight RBIs, also against the Phillies in the Baker Bowl.

Vaughn’s victory over the Phillies was one of the few bright spots of his season, even though he allowed 10 hits and eight runs (two unearned). Over his next 10 games, he collected only one win while suffering seven losses. Two of the losses came in relief appearances. His stats during that stretch illustrated his ineffectiveness, including a 6.11 ERA, .391 batting average, and .439 on-base percentage by opposing batters. He finished the season with a 3-11 record, after averaging 20 wins during the previous seven seasons.

Manager Johnny Evers had returned to the Cubs in 1921, after having skippered the team in 1913. Vaughn had a history of being difficult, often clashing with his managers over pitch selection. He was suspended for 30 days by Evers in July for breaking training rules. Vaughn reportedly left the club for five days without letting the club or a teammate know of his whereabouts.6 He was subsequently declared ineligible by Commissioner Landis because he had played for an industrial team while under suspension. Vaughn declared that he was finished with the Cubs.7 He never returned to the majors, instead finishing his career by playing for various semipro and unaffiliated teams.8

5 Phil Williams, “Stan Baumgartner,” SABR BioProject. sabr.org/bioproj/person/stan-baumgartner/. Baumgartner quit playing after the 1926 season and accepted a full-time job as a sportswriter for the Philadelphia Inquirer. He had previously worked there in a part-time role while still playing. He also became a contributor to The Sporting News covering Philadelphia baseball.