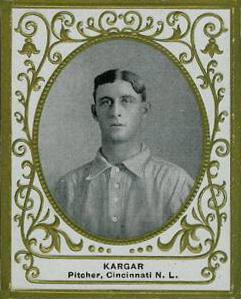 Cincinnati Reds manager Clark Griffith wanted to start pitcher Art Fromme on Wednesday, May 12, 1909, against the Boston Doves, but Fromme complained of a sore arm during warm-ups, which forced Griffith to choose another hurler. He selected Texan Ed Karger, a 26-year-old side-wheeling southpaw. Obtained from the St. Louis Cardinals in the previous offseason, Karger had pitched unimpressively for the Reds. Griffith hoped he would return to the form he showed in 1907, when he threw six shutouts for the Cardinals and compiled a 2.04 ERA in 314 innings.

Boston manager Frank Bowerman picked Tom McCarthy, a 24-year-old right-hander, to start for the Doves. A crowd of 4,161 assembled at Boston’s South End Grounds for the matchup.1 The conditions were unpleasant as a blustery wind blew across the diamond from third base to first base, and infield dirt swirled in the air.

Karger and McCarthy struggled with their control. The Reds scored in the first inning when Rebel Oakes drew a walk, stole second base, and came home on Mike Mitchell’s rousing double to right-center field. In the second inning, McCarthy walked two men and Karger walked three to load the bases, but both pitchers escaped damage.

The Reds rallied in the third inning. An error by shortstop Bill Dahlen allowed Oakes to get aboard. Hans Lobert followed with a single to left field, and Mitchell walked to fill the bases. Consecutive singles by Dick Hoblitzell and Tom Downey drove in three runs. Bowerman replaced McCarthy with Vive Lindaman, a right-handed spitballer. Hoblitzell then scored on a double steal, but only because catcher Peaches Graham dropped the ball.

The Doves scored twice in the fourth inning. After fanning Fred Beck, Karger walked Dahlen and Bill Sweeney. Graham’s single loaded the bases and was the first Boston hit of the game. Karger walked pitcher Lindaman to force in a run, struck out Charlie Starr, and then walked Beals Becker to force in another run.

With the Reds leading 5-2, Griffith left Karger in the game despite his wildness. Over the next four innings, the Doves repeatedly reached base on walks and errors, but they had no hits and scored no runs. The southpaw had allowed one hit and 12 walks through eight innings.

The Reds added a run in the top of the ninth on singles by Dick Egan and Oakes and a sacrifice fly by Mitchell. With two outs in the bottom of the ninth, Dahlen singled off Karger on a well-hit ball to third base; Lobert made a sensational stop but threw wild to first. Next up was Sweeney, who had walked four straight times. This time he singled to center field. Graham then grounded the ball sharply over second base. Shortstop Downey grabbed it and stepped on the bag to end the game. The final score was Cincinnati Reds 6, Boston Doves 2.

Though the Doves were aided by 12 walks and six Cincinnati errors (including two by Karger), they managed to score only two runs. They left 15 men on base. The Boston pitchers were also wild, walking eight Reds. There were 20 walks in the game altogether. Jack Ryder of the Cincinnati Enquirer said:

“What saved the sidewheeler [Karger] from disaster through his excessive generosity was his curve ball, which had the enemy guessing at all stages. Only three hits were made off this effective beast, which is a foxy animal when properly under control. The first five men in the Beantown batting order, all of whom are left-handers, could not hit Karger with telegraph poles.”2

But Karger’s curveball was a wild animal. His erratic hurling got him demoted in June to the St. Paul Saints of the American Association. In late July, he was acquired by the Boston Red Sox, for whom he pitched until 1911.

Karger’s side-arm curveball frustrated the great Ty Cobb, who was a left-handed hitter. In 1937 Cobb named him as one of the three toughest pitchers he faced in his career. Karger “didn’t have much more than a barnyard curve and a prayer,” said Cobb, “but he had me breaking my back.”3

The author relied on the game coverage appearing in the May 13, 1909, issues of the Boston Globe and Cincinnati Enquirer.