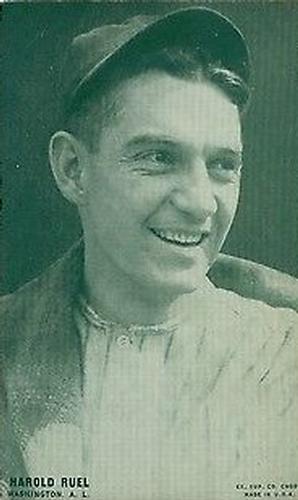 Entering the 1919 season, the strength of the New York Yankees was their “heavy-hitting and strong-defensive” infield: Wally Pipp at first base, Del Pratt at second base, Roger Peckinpaugh at shortstop, and Frank “Home Run” Baker at third base.1 The slugging quartet, together with outfielder Ping Bodie, formed a “Murderers’ Row” in the heart of the team’s 1918 batting order.2 Baker led the American League in home runs each season from 1911 to 1914, and Pipp led the league in that category in 1916 and 1917. But while the 1919 Yankees could hit, they lacked team speed.3

The strength of the 1919 Washington Senators was their pitching, led by the incomparable Walter Johnson, and their weakness was hitting. As a team, the Senators had hit only four home runs during the 1918 season.

On May 11, 1919, the Yankees and Senators had played a 12-inning scoreless tie at the Polo Grounds in New York. Johnson was brilliant, allowing only two hits and one walk in 12 innings, and he retired 28 consecutive batters during the game.4 Jack Quinn went the distance for the Yankees. For the Senators, it was the third game in a row in which they were shut out, and their feeble offense now had a streak of 33 scoreless innings. The Senators were without Clyde Milan, who led the team with a .290 batting average in 1918 but was unavailable due to appendicitis.5

The 1919 Yankees were led by 41-year-old Miller Huggins, in his second season as manager. The 49-year-old Clark Griffith was in his eighth season as manager of the Senators. Huggins chose Allen Russell, a side-arm spitballer, as his starting pitcher on Monday, May 12, and Griffith countered with Jim Shaw for the Senators. Both Russell and Shaw were 25-year-old right-handers.

Playing right field and batting leadoff for the Yankees was George Halas, appearing in his fourth major-league game. A highly touted 24-year-old rookie, Halas starred in baseball, football, and basketball at the University of Illinois. The husky lad resembled Honus Wagner with his “heavy shoulders and long arms.”6 Halas was a fine outfielder and speedy on the basepaths, but there were doubts about whether he could hit major-league pitching.

A crowd of nearly 2,500 arrived at the Polo Grounds, including many “soldier and sailor guests,”7 on a chilly spring day with the temperature in the mid-50s. The home-plate umpire was Brick Owens, and the first-base umpire was Bill Dinneen.

The Senators were the first to score. In the second inning, Sam Rice singled to center field, went to second base on Ed Gharrity’s sacrifice, and came home on Harry Thompson’s single to left field. The run snapped the team’s 34-inning scoreless streak. Thompson, a 29-year-old rookie, was filling Milan’s spot in the lineup.

The Yankees scored twice in the fifth inning. Baker led off with a single to left field and moved to second base on Pratt’s infield out. Duffy Lewis “spanked a single” to center field, scoring Baker.8 Bodie tapped the ball to third baseman Eddie Foster, who threw wildly to second base, allowing Lewis to reach third. Foster then gathered Muddy Ruel’s grounder and threw him out at first, as Lewis came home with the Yankees’ second run. The next inning, the Yankees scored another run, on Peckinpaugh’s double and Baker’s single.

The Senators trailed 3-1 entering the top of the ninth. Except for the singles by Rice and Thompson in the second inning, the team had been hitless facing Russell. But Joe Judge led off the ninth inning with “a terrific smash” into the upper deck in right field for a home run, cutting the deficit to 3-2.9 Foster then got aboard on an infield hit and advanced to second base on a sacrifice by Howie Shanks. Rice drew a walk, and with one out and Foster on second and Rice on first, Gharrity, the Senators’ slow-footed catcher, stepped to the plate. Russell got Gharrity to ground the ball to Peckinpaugh at short for what should have been a game-ending double play. Peckinpaugh fielded it and tossed to Pratt for a force out of Rice at second base, but Pratt’s relay to first base was wild. By the time the ball was recovered, Foster had scored the tying run and Gharrity had reached third base.

Doc Ayers now came to bat with two outs and Gharrity on third. Ayers, a right-handed batter with an anemic career batting average of .169, was the current Washington pitcher, having relieved Shaw the previous inning. Russell got two strikes on Ayers, and as he delivered his next pitch, Gharrity “dashed for the plate on a bold attempt to steal the winning run.”10

“[Yankees catcher] Ruel got the pitch in plenty of time.”11 The 170-pound Gharrity tried to steamroll the 150-pound Ruel, and in the collision, the pair tumbled to the ground. Umpire Owens initially called Gharrity out but changed his call to safe after umpire Dinneen confirmed the Senators’ claim that Ruel had dropped the ball. The Senators now led 4-3.

Huggins, the Yankees’ 5-foot-6, 140-pound “midget manager,”12 went berserk over the call. His face turned shades of purple, pink, yellow, black, and blue as he “frothed at the mouth,” and he “punctuated his oration by pounding his hands” on the chest protector of the 5-foot-10, 200-pound Owens.13 The big ump “ordered Huggins right off the lot.”14

Ayers popped out to Baker to end the top of the ninth and pitched to the Yankees in the bottom half but lost his control. He walked the first two Yankees batters, Baker and Pratt. Chick Fewster entered the game as a pinch-runner for Pratt on first base.

“Lewis laid down a pretty bunt, but [first baseman] Judge came in à la Hal Chase for a pretty pick-up and whistled the ball to Foster in time to force Baker at third.”15 It was the most sensational defensive play of the game. Bodie then flied out to Rice in right field, and Fewster tagged up and moved to third base.

Ruel, whose drop of the ball had given the Senators their lead, drew Ayers’ third walk of the inning to load the bases. Bill Lamar, pinch-hitting for Russell, then stepped to the plate, and he, too, drew a walk from Ayers, forcing in Fewster with the tying run. Halas was due up next, but he had looked inept at the plate, striking out three times in four at-bats, so rookie Lefty O’Doul was sent in to pinch-hit for him. It was O’Doul’s second major-league at-bat, and he popped out to shortstop Shanks to end the inning.

The game continued in the 10th inning with two new pitchers, Bob Shawkey for the Yankees and Lefty Harper for the Senators, and they shut out opposing batters for six extra innings. Shawkey allowed only two hits in that span, and Harper surrendered only three hits. After the 15th inning, Owens called the game because of darkness. The final score was Yankees 4, Senators 4. For the second day in a row, the teams had played an extra-inning tie game, in total, 27 innings with no decision.

In addition to other sources cited in the Notes, the author used game coverage in the May 13, 1919, issues of the New York Times, New York Tribune, Washington Evening Star, and Washington Times and the following box scores:

2 New York Herald, May 7, 1918. “Murderers’ Row” has been popularly used to describe the hitters of the 1927 New York Yankees, but this phrase was first applied to the 1918 Yankees lineup.