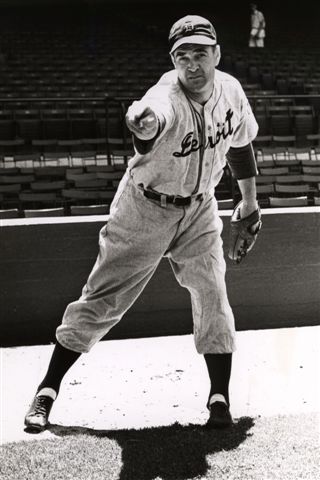 In 1940, the Detroit Tigers ended the New York Yankees’ run of four straight American League pennants. The Tigers were led by American League MVP Hank Greenberg, who batted .340 with 41 home runs and 150 RBIs, and pitcher Louis “Bobo” Newsom, who finished the season with a 21-5 record and a 2.83 ERA, finishing second in the American League in wins, winning percentage, strikeouts (164), and ERA.

The 1941 season did not start out nearly so well for either the Tigers or Newsom. Greenberg was drafted and inducted into the US Army on May 7, 1941. On May 8, Newsom was the losing pitcher in a 7-1 loss the Washington Senators, which dropped his season record to 2-4 and dropped the Tigers to fifth place with a record of 11-10.

At the start of the day on May 13, 1941, as the Tigers prepared to open a two-game series in the nation’s capital, the Tigers had lost all four games since Greenberg’s induction, falling to 11-12, still in fifth place. The Tigers had lost nine straight games to that day’s opponent, the Washington Senators, including seven exhibition games at the end of spring training,1 and had yet to win a game on the road all season (0-6).

George Case was the first batter for either team to reach base, when he led off the bottom of the first inning with a single and stole second.2 But he got no further.

The Tigers scored first in the top of the second. Rudy York walked and Charlie Gehringer was hit by a pitch. Pinky Higgins advanced both runners with a sacrifice and York scored on Birdie Tebbetts’s fly out to Ben Chapman. The Tigers added three more runs the next inning. Newsom started the rally with a single. An error by Hudson on Ned Harris’s sacrifice attempt put runners on first and second. Second baseman Jimmy Bloodworth let Pat Mullin’s groundball roll through his legs, scoring Newsom. Bruce Campbell doubled to right field, scoring Harris, and, finally, Mullin scored on York’s fly ball to Doc Cramer.

Meanwhile, Newsom was shutting the Senators down, having faced only three batters over the minimum through four innings, and the Tigers looked poised to end all three of their active losing streaks (vs. Washington, on the road, and since Greenberg left the team), taking a 4-0 lead into the bottom of the fifth inning.

Ben Chapman opened the bottom of the fifth inning with a pop fly to shallow center field that Tigers shortstop Frank Croucher dropped after a long run, Chapman being credited with a single. Catcher Jake Early singled Chapman to third base and George Case put the Senators on the scoreboard with his third straight single to left. Doc Cramer hit into a force play, leaving runners at first and third with two out. Mickey Vernon followed with a “lustily socked three-bagger high off the wall in right center”3 to score Early and Cramer and bring the Senators within one run, 4-3. Newsom escaped the inning with no further damage.

Bobo was not so lucky in the sixth inning. He walked Cecil Travis to open the inning and Jimmy Bloodworth sent Travis to third base “with a sharp single over second.”4 At this point, Tigers manager Del Baker called on Al Benton for his fifth relief appearance of the season.5

Benton began his appearance by walking Ben Chapman on four pitches to load the bases with nobody out.6 Jake Early grounded to first baseman Rudy York, whose “clever throw to the plate”7 forced Travis for the first out. Sid Hudson laid down a squeeze bunt. Benton slipped while trying to field the ball and his throw to the plate was too late to force Bloodworth,8 who scored the tying run on the play. George Case’s fly out to left field scored Chapman and the Senators had a 5-4 lead.

Nobody scored over the final three innings with Benton and Hudson allowing a single baserunner apiece, and the Senators pulled out the 5-4 win.

The Senators’ winning rally creates an interesting scoring brainteaser: who should be the losing pitcher? When Newsom left the game, the Tigers held a 4-3 lead, but the tying and go-ahead runs were on base in the persons of Cecil Travis and Jimmy Bloodworth, who were both Newsom’s responsibility. But the winning run was ultimately scored by Ben Chapman, and Chapman was Al Benton’s responsibility, Benton having walked Chapman on four pitches. Travis, the first baserunner charged to Newsom in the inning, was forced at the plate, and replaced by Jake Early, who did not score. The official scorer charged Chapman’s run to Benton and gave him the loss, dropping his record to 1-1. All of the newspaper stories the next day reported that Benton was the losing pitcher.9

But at least one person disagreed with this decision: Bobo Newsom. H.G. Salinger of the Detroit Times explained:

“Buck Newsom approached the official scorer in Washington yesterday and told him he did Al Benton a grave injustice by charging him with Detroit’s defeat on Tuesday, where Benton relieved Newsom. … Still, there were two on and none out when Benton came in. Had bases been empty Washington wouldn’t have scored. In view of that Newsom said he, and not Benton, should be charged with that defeat. Official scorer made the change, charging defeat to Newsom.”10

The loss dropped Newsom’s record to 2-5, giving him as many losses in the first month of the 1941 season as he suffered over the entire 1940 season. But as Salinger put it, Newsom provided a great “[e]xample of sportsmanship.”11

Newsom improved somewhat as the 1941 season progressed but never regained his 1940 form. He finished the season with a record of 12-20 and a 4.60 ERA, leading the American League in losses. The Tigers also never quite found their groove in 1941, finishing in fourth place with a 75-79 record.

In addition to the Sources cited in the Notes, I used the Baseball-Reference.com and Retrosheet.org websites. There is also an excellent biography of Bobo Newsom, written by Ralph Berger for the SABR Biography Project.

For games for which Retrosheet does not have complete play-by-play data, volunteers do deduced play-by-play from contemporary newspaper accounts and other available information. I recently deduced this game as part of working through the 1941 season.

9 Povich in the Washington Post: “Al Benton … put the winning run on base by pitching four straight balls to Ben Chapman.” Ward in the Detroit Free Press: “Benton … had the distressing experience of losing a ball game even though he allowed only one hit and one run in three innings.” MacDonell in the Detroit Times: “Benton, instead of being a hero, was charged with the loss of the contest.”