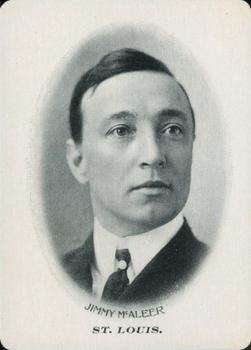 With his pitchers falling by the wayside on a seemingly daily basis, Cleveland Blues manager Jimmy McAleer figured there couldn’t be any harm in asking.

After injuries to his other pitchers forced McAleer to put Bill Hart on the pitching slab for the third time in five days on May 14, 1901, less than three weeks into the American League’s debut season as a major league, McAleer knew he needed to get more healthy pitchers on his roster before a homestand against the league-leading Detroit Tigers that would begin two days later.

So after the Milwaukee Brewers drubbed the Blues 11-1 to sweep a four-game series at Lloyd Street Grounds, McAleer tracked down Milwaukee manager Hugh Duffy and offered him a trade – ailing pitcher Bill Hoffer in exchange for Pete Dowling, who had beaten Cleveland in a seven-hitter two days earlier. Duffy hardly even considered the proposal, sending the crippled Blues back east to deal with their pitching shortage in other ways.

“We scarcely know which way to turn, for no matter what we do we run up against a barrier of hard luck that bumps us hard,” McAleer said upon returning to Cleveland. “There are all sorts of lines out for pitchers to tide us over until our men get in condition. When we round to, we will have a good team, but we seem to be a long time rounding.”1

Cleveland’s pitching problems began at the onset of the series in Milwaukee. On May 11 the Blues fell into last place with a loss in the series opener.2 In that game, Ed Scott lasted just one inning, which forced Hoffer to throw seven innings of relief. The Brewers won again the next day, securing back-to-back wins for the first time in their brief history. Cleveland had adjusted its starting lineup in hopes of snapping a six-game losing skid but didn’t get help from the mound. The Blues were forced to start Hart on short rest because Scott wasn’t up to the assignment.

During that game, Hart was struck in the hand by a comebacker and hit by a thrown ball while running the bases, but he fought through all eight innings. In announcing after the game that McAleer wanted to a sign a pitcher, the Cleveland Plain Dealer wrote that ace Earl Moore “is suffering a very lame arm,” Hoffer is “in the same boat,” Hart is “not in form by any means,” and Scott “has not rounded to.”3 That constituted Cleveland’s entire rotation.

On May 13 the struggles continued in another loss. Though Scott acknowledged that he did not want to pitch, he opted to give it a go through freezing temperatures. Otherwise, Hart would have been forced to start a second straight game. Moore was the probable starter on May 14, but his arm became so sore by game time that he couldn’t even lob the ball to the plate.

That left Hart to start once again.

The 35-year-old Hart hadn’t won since he was credited with the first victory in Cleveland’s franchise history on April 27, and the sub-.500 Brewers weren’t about to become his second victim. Milwaukee scored in all but two innings, as the Blues served as the “knocker of the hoodoo” that had followed the Brewers since Opening Day.4

Irv Waldron quickly got Milwaukee moving in the right direction, leading off the bottom of the first by reaching third on errors by Cleveland second baseman George Yeager and right fielder Ollie Pickering. After Billy Gilbert walked, Bill Hallman hit an RBI single for a 1-0 lead. A walk and another error by Cleveland gave Milwaukee a second run in the second.

The Blues cut the lead in half in the third when Frank Genins doubled, moved to third on a groundout, and scored on Pickering’s fly out. They wouldn’t muster much more offense, securing just four hits off Bill Reidy, a Cleveland native.

Milwaukee continued its offensive barrage in the fourth, scoring twice without a solid hit. Tom Leahy drew a one-out walk and moved to second on Reidy’s sacrifice. Back-to-back errors allowed two runs to score and gave the Brewers a 5-1 lead. After another Brewers run in the fifth, six hits and an error in the sixth produced four runs as Milwaukee’s offense batted around. The Brewers added their last run in the seventh and finished with a double-digit run total for the fifth time in 19 games.

The sweep of Cleveland was the first of two four-game winning streaks for the Brewers in 1901 (also August 31 to September 2). While the wins pushed Milwaukee to 8-11 and up to sixth in the standings, the Brewers fell back to the basement a month later and remained there for much of the season’s balance. They finished 35½ games out of first place at 48-89 (.350) and were relocated to St. Louis for 1902 after a last-place finish.

The reeling Blues turned to Dick Braggins for his major-league debut to open the series against Detroit on May 16. After that, Cleveland’s rotation began to stabilize, aided by the acquisition of Dowling. He came to Cleveland after being released by the Brewers on June 1. The Blues had been given priority in negotiating with Dowling, and they got more production out of the southpaw than Milwaukee did.

Dowling pitched the first no-hitter in American League history and added a one-hitter for Cleveland after he went 1-3 with a 5.62 ERA in 10 appearances for the Brewers. With the Blues, Dowling posted an 11-22 record but had a respectable ERA of 3.86 (which stood just below the American League-average mark of 3.66) in his final big-league season.

Whether the trade would have benefited Hoffer will never be known. He stuck in the Cleveland rotation through early July, but his final major-league appearance came on July 4, when he earned a complete-game victory over the Chicago White Sox to improve to 3-8. Hoffer toiled on and off in the minors until 1909.

Despite the pair of highlights from Dowling, the Blues never got the season turned around after their sluggish start. The four losses to Milwaukee ran Cleveland’s losing streak to nine games and dropped the Blues to 4-15. With losses in the first two games against Detroit, Cleveland had its longest losing streak of the season at 11 games, a stretch of futility that wouldn’t be matched by the franchise again until the 1909 season. Cleveland finished the 1901 season 29 games out of first place at 54-82, and the Blues used 11 starting pitchers on the way to a seventh-place finish in their inaugural major-league season.

This article was fact-checked by Stew Thornley and copy-edited by Len Levin. Special thanks to the Milwaukee Public Library for providing information from Milwaukee newspapers.

In addition to the sources cited in the Notes, the author consulted the Baseball-Reference.com, Stathead.com, and Retrosheet.org websites for pertinent materials and the box scores. He also used information obtained from game coverage by the Cleveland Plain Dealer, Milwaukee Journal, and Milwaukee Sentinel.

2 The Blues and Brewers were tied for last place going into the series.