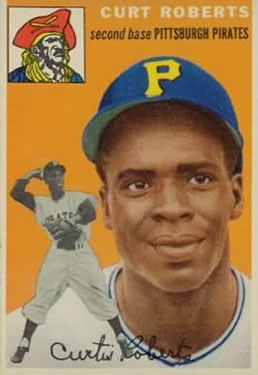 Branch Rickey, who had shaken the foundations of Organized Baseball in 1947 when he orchestrated Jackie Robinson’s integration of the sport with the Brooklyn Dodgers, was still innovating seven years later. He had left as Brooklyn’s general manager to take over the same spot with the Pittsburgh Pirates in 1950. Before the 1952 season he purchased the contract of a promising 22-year-old African-American infielder, Curt Roberts, for the Pirates’ Denver Bears affiliate in the Class-A Western League, allowed Roberts two more years of seasoning at Denver, then promoted him to the Pittsburgh spring-training roster for 1954. Rickey saw to it that manager Fred Haney gave Roberts ample work at second base that spring – Johnny O’Brien, the Bucs’ primary second baseman in 1953, had been drafted into military service the prior September.1

Coming off a 50-104 season that had left them solidly in the National League cellar,2 the 1954 Pirates had plenty of open spots.3 Roberts brushed off competition from fellow rookie George Freese 4 and was Pittsburgh’s Opening Day second baseman against the Philadelphia Phillies on April 13 at Forbes Field .5

Roberts, who had debuted in professional baseball as a 17-year-old with the Kansas City Monarchs in the Negro American League, “became the Pirates’ first African American player. In the bottom of the first he batted second. Just as had Jackie Robinson, this retracing the historic steps more faithfully than anyone else who had come in-between.”6 This, because Rickey had “singled out Roberts for the identical set of qualities: tolerant attitude, competitive demeanor, admirable baseball skills” that he had used to select Robinson seven years earlier.7

As to Roberts’ arrival, “It was a big deal,” according to Bill Nunn, sports editor of the African-American Pittsburgh Courier in 1954, and Roberts’s neighbor in the Schenley Heights section of the city. “But quite a few [black] guys had come into the major leagues, and Curt was an average ballplayer. Under the circumstances, he really didn’t get the [attention] some of the other guys did.” Still, according to the 1997 profile of Roberts in which Nunn is quoted, “like most of the others, Roberts was a target for racists, some of them at Forbes Field. He and his wife were briefed on what to expect by Rickey, who talked to the couple before spring training in 1954 much the way he had with Robinson seven years earlier.”8

The slightly-built (5-feet-8, 165 pounds), right-handed, sometimes bespectacled Roberts got his career off to a fine start, touching perennial National League All-Star Robin Roberts for a triple in his first at-bat in the April 13 opener. Through May 15, Curt Roberts had played all but one inning of Pittsburgh’s 28 games at second base, was hitting a decent .230, and had been charged with only three errors.

By then, though, the Pirates were predictably back in last place in the National League at 9-19. They stood 3½ games behind the seventh-place Cubs as new Chicago manager Stan Hack brought his club to Forbes Field for a three-game series starting with a Sunday doubleheader on May 16.

The Pirates had beaten Milwaukee behind Vern Law the day before and manager Haney hoped to keep things going with right-hander Bob Friend on the mound in the first game. At 23, Friend had yet to blossom into the ace he would ultimately become, but he had had a good spring and had gotten the call as Pittsburgh’s Opening Day starter. In four starts, though, he had struggled to a 1-2 record and 6.75 ERA. This Sunday afternoon, in front of a crowd of 14,369,9 he cruised through the first two innings. Cubs starter Paul Minner, a 6-foot-5 lefty from New Wilmington, Pennsylvania, 60 miles northwest of Pittsburgh, did the same. Roberts, again hitting number two in the order after also having been used in the leadoff and seventh slots, quickly took away Minner’s no-hitter chances in the first inning with a single; Minner summarily erased him on Dick Cole’s double-play groundball.

Friend slipped in the Cubs’ third inning. With one out, former Pirate Joe Garagiola, who had gone to Chicago with Ralph Kiner in the 1953 trade that included George Freese,10 singled, moved to second as Minner made an infield out, then scored on Frank Baumholtz’s single. The next batter, Dee Fondy, homered. Chicago led, 3-0.

Pittsburgh got one of those runs back in its half of the fourth. Roberts tripled, his third of the season, then scored on Frank Thomas’s single. Maintaining their three-run lead, the Cubs answered with another run in the fifth on Garagiola’s double, a single by Minner that moved the broadcaster-to-be to third, and another RBI single by Baumholtz to make it 4-1 Chicago.

The Pirates kept it competitive at 4-2 with a run in their fifth. Bob Skinner laced a leadoff triple and came home on Dick Hall’s sacrifice fly to left field. Friend tried to keep things going with a single, but Minner retired Cal Abrams and Roberts to end the mild threat.

But Friend yielded a double to Ransom Jackson and singles to Kiner and Ernie Banks that produced a run to open the Chicago sixth inning and make it 5-2 before Haney replaced him with Len Yochim. Yochim allowed a bunt single to Garagiola that loaded the bases; Minner then drove home two runs with a double. After Yochim finally managed the first two outs of the inning, Gene Baker compounded the damage with another two-run single. Batting around, the Cubs plated five on six hits to take a 9-2 lead. They increased it to 10-2 in the seventh when Kiner walked, Garagiola singled, and Minner, who had to be immensely enjoying this day back in western Pennsylvania, nailed another double off Yochim to score Kiner.11

Roberts’s third hit of the day, “a blooper back of second,”12 drove in the Pirates’ third run in their half of the seventh. That was it for the Pittsburgh offense.

Thirty-six-year-old Joe Page, signed by the Pirates in 1954 after a distinguished relief career with the New York Yankees that ended with a sore arm after the 1950 season, took over on the mound in the eighth. The lefty navigated that inning without damage, but the Cubs nicked him for two more runs in the ninth on a home run by Banks after Kiner’s double. Garagiola, who was 5-for-5 in the game,13 picked up another single, but Page retired the pesky Minner; the lefty then returned to the mound and retired the Pirates in order in the bottom of the inning to close out a tidy 12-3, complete-game win.

Roberts had done his part despite the shaky Pirate pitching. He chipped in three of Pittsburgh’s 10 hits, scored a run, and drove in another. The three-hit game marked the first of three times Roberts managed the feat in the majors and lifted his season batting average from .230 to .246. He handled four defensive chances successfully.

And although 1954 was Roberts’s only full season in the majors — Johnny O’Brien was back from the military in 1955 and Roberts played in only 37 more games as a Pirate before being bumped by 19-year-old Bill Mazeroski and traded to the Kansas City Athletics in June of 195614  — Roberts’ brief but pioneering time with Pittsburgh had “humanized the ongoing integration of baseball by thrashing the perception that African-Americans had to be superstars to find a place in a big-league world of white bench players.”15

The deduced games initiative Dave Smith is leading at Retrosheet.org provided a helpful play-by-play of this game, done by Richard Weston.

In addition to the Sources cited in the Notes, I used the Baseball-Reference.com website for player and team pages and game logs. I used the box score for this game, Curt Roberts’s and other player pages, and, as noted, the deduced play-by-play of this game at the Retrosheet.org website. I accessed articles from The Sporting Newsthrough PaperOfRecord.com. Other cited newspaper articles are from the digital archives of Newspapers.com.

4 The Pirates had acquired George Freese, who had one at-bat of major-league experience with the Detroit Tigers, in a multiplayer June 1953 trade with the Chicago Cubs which sent Ralph Kiner to Chicago.  Freese was assigned to Pittsburgh’s Double-A farm club in New Orleans out of 1954 spring training and didn’t play for the Pirates at the major-league level until 1955.

7 Ibid. Curt Roberts is generally recognized as breaking the color line for the Pittsburgh franchise. It should be noted, however, that in 1953, Carlos Bernier, a Puerto Rican, was arguably the team’s first black player. Bernier had 366 plate appearances in 105 games as a Pittsburgh outfielder in 1953, his only year in the majors. But Bernier “was competitive and aggressive on the ballfield, and some have speculated that this led to his having a long minor league career with only the one opportunity at the major-league level.” “Carlos Bernier,” Baseball-Reference.com Bullpen, accessed September 13, 2017. Presumably Bernier was not the player Branch Rickey, who added Roberts to the Pittsburgh roster after the 1953 season, wanted as a standard-bearer. See also: SABR member Joe Guzzardi’s “Carlos Bernier, More Than a Footnote: Major League Baseball Doesn’t Agree, but Carlos Bernier Was the Pirates’ First Black Player, Argues Baseball Historian,” Pittsburgh Post-Gazette, April 14, 2013: F-1, and Charles F. Faber, “Carlos Bernier,” Puerto Rico and Baseball: 60 Biographies (Phoenix: Society for American Baseball Research, 2017), 46-51, where Faber states on page 48: “Pittsburgh promoted Bernier to the majors in 1953. He became the first black player to join the Pirates,” and recognizes Curt Roberts only parenthetically.

9 This attendance figure is reported in the Retrosheet.org box score. The box score for this game in the Pittsburgh Post-Gazette (May 17, 1954: 22) reports attendance of 13,369.

10 See also: Note 4 relative to the trade; Both Kiner and Garagiola, former Pirates, “received a nice welcome by the fans,” according to Pirates beat writer Jack Hernon. Jack Hernon, “Bunts and Base Hits,” Pittsburgh Post-Gazette, May 17, 1954: 22.

13 Over his major-league career, which began in 1946 and ended with this 1954 season, Garagiola had twice before collected four hits in a game. This was his only five-hit game.

14 The A’s assigned Roberts to Triple-A Columbus in the International League. Before the 1957 season they transferred his contract to the New York Yankees as a “player to be named later.” He stayed at the Triple-A level with the Yankees and Dodgers organizations through 1962, then retired at age 33 after spending the 1963 season with the White Sox’ Lynchburg club in the South Atlantic League (then Double-A).