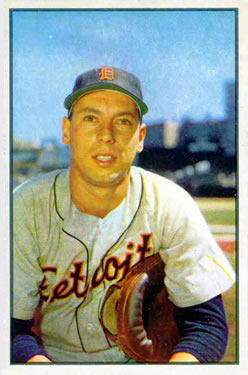 Between April 21 and June 19, 1951, the city of Detroit was mired in a transit strike. Downtown businesses suffered. The work stoppage may have been part of the reason only 2,723 fans showed up at Briggs Stadium for the Tigers’ game against the visiting Philadelphia Athletics.1

The A’s came into Detroit to begin a two-game series on May 1. Philadelphia, with a 1-12 record and having lost 10 games in a row, was in last place in the American League. Thanks to an eight-run 11th inning in the May 1 series opener, they had picked up their second victory of the season.

A’s manager Jimmy Dykes, who had taken over for the legendary Connie Mack, sent Joe Coleman to the mound for the short series finale. Coleman was 0-5 with an 8.50 ERA in 1950. He was making his fifth appearance of the 1951 season. He came into the game with no wins against one loss.2

The Tigers were also off to a slow start, having lost six of their first nine games. Tigers starter Saul Rogovin was making his first start of the year. He had made two previous appearances, winning one and losing one. The catcher was Joe Ginsberg. The pair formed a Jewish battery, but they had to wait until the ninth inning to make history.3

The Tigers threatened in the first inning, but failed to score. With one out, Dick Kryhoski doubled. He went to third on George Kell’s hit. A double play helped Coleman and the A’s escape unscathed.

With one out in the bottom of the 3rd inning, Rogovin doubled. He scored the game’s first run on Kryhoski’s second hit, a single to center field.

Billy Hitchcock became the A’s first baserunner in the top of the fifth inning by drawing a two-out walk. He was left stranded there after Rogovin retired Pete Suder on a foul pop to Kell near third base.

Detroit tacked on an unearned run in the fifth. Ginsberg opened the frame with a bunt single. Johnny Lipon followed with a sacrifice. Rogovin drew a walk. He and Ginsberg advanced to second and third on Jerry Priddy’s fielder’s-choice grounder. Kryhoski grounded to first baseman Ferris Fain for what should have been the third out of the inning, but Fain muffed it, allowing Ginsberg to score Detroit’s second run. Coleman retired Kell on a groundout, ending the inning.

Rogovin retired the A’s in order in the sixth inning. He still hadn’t given up a hit. In the bottom of the inning, the Tigers scored run number three. Vic Wertz opened the inning with a walk. Two outs later, Ginsberg singled him to third. Coleman uncorked a wild pitch, allowing Ginsberg to score.

The A’s got their second baserunner of the game when Dave Philley reached on an error by first baseman Kryhoski. Fain followed with the A’s first hit off Rogovin, a single to right field. The threat fizzled when Rogovin retired the next two A’s hitters.

Nursing a two-run lead, Rogovin was still on the mound to open the ninth inning. Philley began the inning with a hit, but Rogovin retired Fain and Sam Chapman. He was one out away from a two-hit, 3-1 victory. It wasn’t to be. With third baseman Hitchcock due up, manager Dykes called on his fourth pinch-hitter of the game, rookie Lou Limmer.4 It was at this moment that baseball history was made.

Never before, or since in major-league baseball has there been a Jewish pitcher (Rogovin), pitching to a Jewish batter (Limmer), with a Jewish catcher (Ginsberg) behind home plate.

“With a count of one ball, the rookie first baseman (Limmer) teed off on a drive which viciously rattled an empty seat in the last row of the upper deck in right field.”5 The home run was the second in Limmer’s young career. After six pinch-hit appearances, he had three hits (two homers and a double) and seven runs batted in.

The Detroit Jewish Chronicle pointed out, “Limmer, a Jewish southpaw from the Bronx6 … facing Saul Rogovin, Bengals’ Jewish right hander … managed to drive a pitch into the upper right field deck.”7 Interestingly, there was no mention of catcher Ginsberg.

With the game now tied, 3-3, Johnny Groth led off the bottom of the ninth inning with a drive to right, but Elmer Valo “made a sensational diving catch … and robbed Johnny of a sure double.”8 With two outs, Lipon singled and Joost walked. Reliever Hank Wyse stranded the two runners, retiring Priddy on a fly out to right.

The A’s went ahead in their half of the 10th inning. Ray Herbert, in relief of Rogovin, struck out Joe Astroth and Wyse to start the inning. But Joost drew a walk and scored on Valo’s triple.

Trailing for the first time in the game, the Tigers sent up their 2-3-4 hitters. With one out, both Kell and Wertz singled. Pat Mullin, pinch-hitting for Hoot Evers, singled Kell home with the tying run. Wertz advanced to second. Bud Souchock ran for Wertz, and scored the winning run on Groth’s walk-off base hit.

Given that less than 1 percent of all major-league players in history have been or are Jewish, the small crowd in Detroit’s Briggs Stadium on that May afternoon in 1951 witnessed something special.

Murray Greenberg, “Baseball’s Jewiest Moment of All,” The Forward, May 1, 2015, forward.com/culture/307228/the-most-jewish-moment-in-baseball-history

4 In the previous game between the A’s and Tigers, Limmer pinch-hit for Hitchcock. Limmer’s 11th-inning bases-loaded double off Dizzy Trout broke the game open for the A’s.

6 Rogovin was born in Brooklyn; Ginsberg in Manhattan.