May 20, 1999: Mets' Robin Ventura hits grand slams in both ends of doubleheader

May 20, 1999: Mets' Robin Ventura hits grand slams in both ends of doubleheader 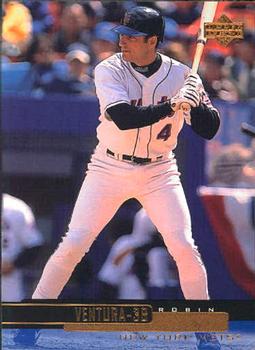 The New York Mets were trying to stay relevant in the National League East division race. After losing their previous three games, they needed wins to stay in second place behind the Atlanta Braves. Milwaukee had beaten the Mets in the first two games of the series but the Brewers still remained in the cellar of the National League Central.

Al Leiter took the mound for the Mets in the first game of a doubleheader that would close out the series. Leiter had struggled through the first two months of the season. He entered the game with just one win against four losses. His ERA had grown to 6.38 although he insisted that he was still throwing as well as in the previous season. Leiter looked good early as he struck out three of the first six batters he faced.

Milwaukee’s Jim Abbott, who was looking for his first win of the season, struggled almost immediately. After getting the first two batters out, he walked John Olerud, gave up a single to Mike Piazza. And walked Edgardo Alfonzo. The next batter, Robin Ventura, on a 3-and-2 count, hit a shot over the right-field wall. It was the 11th grand slam of his career and it gave the Mets a 4-0 lead.

Leiter faltered in the third inning. With Mark Loretta at second after a force play and a wild pitch, Leiter gave up a double and three singles. By the time Bobby Hughes grounded out, the Brewers had scored three runs.

In the fourth Leiter walked the leadoff batter, Alex Ochoa, and gave up a single to Ronnie Belliard. Abbott bunted, and when Leiter threw the ball away and Ochoa scored, tying the score.

Leiter helped the Mets regain the lead in the bottom of the inning. Benny Agbayani singled and went to second when Abbott threw a wild pitch to Rey Ordonez, then walked him. Leiter bunted, and when Abbott’s throw went wild, Agbayani scored. 5-4, Mets.

But Leiter couldn’t hold the lead. Jeff Cirillo led off the Brewers’ fifth with a single and Leiter hit Jeromy Burnitz. With two outs, Ochoa doubled to give the Brewers the lead for the first time. After he got the third out, Leiter “stalked off the mound, his face etched in a grimace, muttering words of frustration to himself.”1 This was repeated nearly every inning as he struggled with every pitch.

When Abbott gave up consecutive singles in the bottom of the fifth, Steve Falteisek replaced him. On a 2-and-1 count, Agbayani, who had recently been brought up from the Norfolk Tides, sent Falteisek’s pitch over the center-field wall, and the Mets led 8-6.

The Mets never lost that lead and Leiter, though he was relieved in the sixth, won his second victory of the season. Piazza homered in the sixth to stretch the lead and Agbayani homered again in the seventh, giving the Mets an 11-6 lead. The 421-foot blast brought the Shea Stadium crowd to its feet, “chanting ‘BEN-NEE, BEN-NEE, BEN-NEE,’ until the quiet 26-year-old from Hawaii made a curtain call.”2 Asked if he had heard the shouts, he said, “How can you not hear it? I’m not used to it.”3

Agbayani was now 9-for-10 in the series against the Brewers. “Benny is the player of the week, I guess,” Mets manager Bobby Valentine said after the game. “I wasn’t going to bring him up just to pinch-hit. There was a starting opportunity and he’s made the most of it.”4

Mets reliever Allen Watson shut out the Brewers for two innings before giving the crowd a scare in the eighth. Cirillo’s three-run blast narrowed the Mets’ lead to two runs. Closer John Franco gave up an unearned run in the ninth, but when Ochoa tried to score, right fielder Roger Cedeño nailed him at the plate for the game-ending out.

A relieved Leiter said, “Wins are precious and I’ll take a win anytime. I believe if I continue to do what I’m doing, things will turn. Hopefully, from now on, the jam shots will be caught and the goofiness during games will go my way.”5

Valentine backed up his pitcher, saying, “Words only go so far. You need action and the win today was action. Regardless of how it looked or how tough it was to get, he’s going home with one more win than he had before.”6

When the second game started 36 minutes later, Masato Yoshii was on the mound for the Mets. He had become their most consistent starter, winning his previous three starts. After a 1-2-3 first inning, the Brewers put runners in scoring position every inning through the sixth. Yoshii managed to get out of trouble every time except in the sixth, when Geoff Jenkins hit a home run over the center-field wall. It turned out to be only run the Brewers scored.

Brewers starter Steve Woodard had a 1-2-3 first inning on 12 pitches, but was unable to keep that momentum going. Ventura led off the second with a double and scored when Brian McRae singled. McRae went to second when Woodard walked Agbayani, and scored on Luis Lopez’s single to right field. It gave the Mets a 2-0 lead and they didn’t look back.

Cedeño wasted no time in getting into scoring position by stealing second and third on the next two pitches. Woodard eventually walked Alfonzo and plunked Olerud to load the bases. Brewers manager Phil Garner had seen enough. He brought left-hander Horacio Estrada to stop the bleeding in the fourth inning.

As he did in the first game, Ventura greeted the reliever with a grand slam, this one going over the wall at almost the same spot as the one in the first game. He was now 6-9 this season with the bases loaded with 12 RBIs. It was the second time Ventura hit two grand slams in one day; the first time was on September 4, 1995, when he was with the Chicago White Sox and smashed two slams in a game against the Texas Rangers.

The pair for the Mets made Ventura the first player to hit grand slams in both games of a doubleheader. “It’s kind of better this time because it involved two games,” he said. “It’s a little more satisfying. The last game was kind of out of hand. (It was a 14-3 White Sox victory.) This time, it affected two games.”7

Jermaine Allensworth batted for Yoshii in the seventh and hit the first pitch from Estrada over the center-field fence for a home run. The run boosted the Mets’ lead to 10-1. Rigo Beltran pitched the final two innings for the Mets, allowing just one baserunner to help the Mets sweep.

Although it would not have surprised anyone if he savored his accomplishment as long as possible, Ventura did his best to shrug it all off after the game. He told reporters, “It was a good day to have a doubleheader.” He added, “I can’t drive home and say, ‘I’m pretty cool now.’ I’ve still got to do something tomorrow. I’ve got to stand at the bus stop [with my kids] and I’ve still got to change diapers.”8

Although it may have been just another day at work for Ventura, there’s nothing like two grand slams and eight RBIs to make it all feel worthwhile.